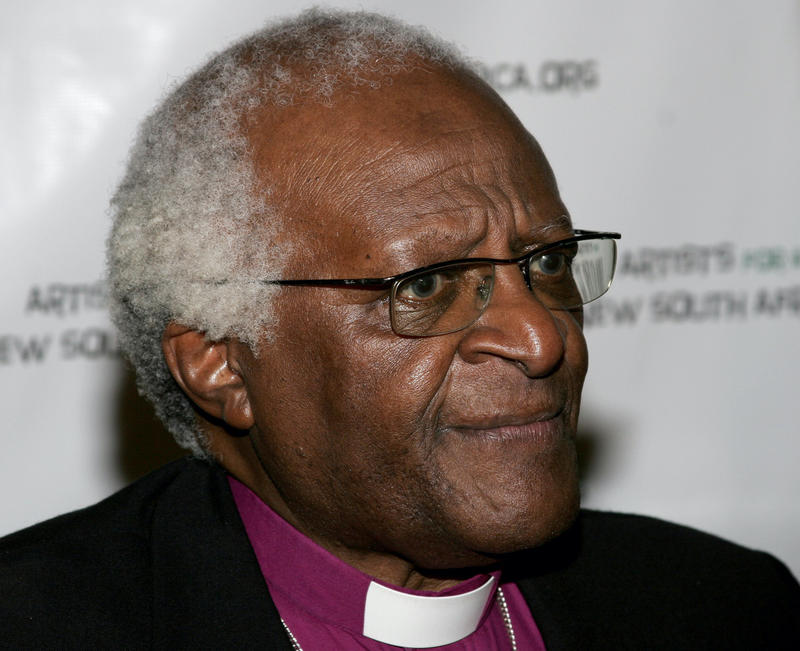 Akaash Maharaj (St Edmund Hall, 1990) reflects on the day he met the late bishop and political leader of South Africa

Whoever coined the adage 'Never meet your heroes' could not have met Archbishop Desmond Tutu.

In 1994, South Africa held its first genuinely democratic elections.  Nelson Mandela went from being the state’s most execrated prisoner, to its president.  Apartheid was slain.  Archbishop Tutu visited the United Kingdom, to deliver a sermon that would mark South Africa’s readmission to the Commonwealth of Nations.

I was nearing the end of my term as president of the Oxford University Student Union, and wrote to invite him to visit the University.

He was – and remains – one of my heroes, and I scratched out that letter more in hope than in expectation that he would be willing to divert from London to Oxford, especially out of term.  He replied with an invitation of his own, for us to sit down together at Westminster Abbey.

But when we met, he was warm and kind, and we spent as much time laughing as talking.

He told me about having attended an anti‑apartheid celebration in Toronto, my home, which had included a performance by Salome Bey.  'She is a much better singer than me,' he conceded.

'And the better dancer?' I asked, having heard of his propensity to cut a rug at public events.

He giggled. 'Well, she is absolutely the better singer.'

Our conversation turned from the past to the future.

He told me about the desperate imperative to enable South Africans to bridge the chasm left by apartheid, and described the foundations of what would eventually become the country’s Truth and Reconciliation Commission.  He paused, and asked me, 'So, what do you think?'.

The risk of asking a young man what he thinks, is that he is likely to tell you.

'I think this idea is just bonkers,' I replied.

Time and hindsight have not diminished my embarrassment.

A critical component of South Africa’s Truth and Reconciliation Commission would be the offer of amnesty, to encourage perpetrators to give full, public confessions of the crimes they had committed during the apartheid regime.  The objective of the Commission would be to ensure that apartheid’s horrors would be fully exposed, and its victims’ sufferings openly acknowledged, as a step towards national reconciliation.

'Perhaps I am misunderstanding,' I offered, 'but do you mean political leaders could be invited to step forward, to tell the entire world about their ghoulish crimes like mass murders, then be allowed to stand up, turn away from grieving families, and saunter out the door, forever immune from prosecution?'

I had not misunderstood.  This would be a Truth and Reconciliation Commission.  It would not be a justice commission.

'Archbishop,' I offered hesitantly, 'I do not presume to offer you, of all people, thoughts on South African society.  I will only say that to my ears, this sounds like the prelude to a bloodbath.'

Yet, the Truth and Reconciliation Commission proved to be a miracle of the modern age.

It was indispensable to making the transition from apartheid to democracy peaceful and successful.  And its chairman, Archbishop Desmond Tutu, further cemented his place as one of the great peacemakers of our times.

I have had many years since that conversation to reflect on why I could not imagine what he so easily foresaw.  I believe there are three reasons.

The first, is that I did not adequately appreciate the power of personal leadership.

We live in an era that sneers at the power of individuals, and most PPEists will tell us that history is shaped by the impersonal forces of economics, demographics, and the currents of time.  But individuals matter.  Character matters.  Personal example matters.  One person’s devotion to the dignity of all others, matters.

The second reason, is that I wildly underestimated the human capacity to forgive.

Forgiveness is less about absolving those who have harmed us, and more about drawing their poison from our own souls.  It is an act of radical defiance of the hatred proffered by injustice.  Like mercy, forgiveness is the prerogative of the strong.

I am astonished that so many South Africans were not only able to forgive their former oppressors, but were also willing to do so.  I am certain that one of the reasons they took that path was not because Archbishop Tutu preached forgiveness, but because his life modelled forgiveness.

The third reason, is that I did not understand how willing South Africans would be to let go of yesterday, if they were persuaded that tomorrow could be a day of hope.

It is neither a passive awaiting of deliverance, nor a blithe supposition that progress drifts in of its own accord.  It is a hope born of the knowledge that a people who have pulled down apartheid can not be daunted by its rubble.

The world feels like a lesser place to me since Archbishop Tutu’s death.  I know he would wave away such sentiments, and tell me that the world will be what we collectively choose to make of it.

Nevertheless, it is as if a light that shone so brightly, and lit the way for so many, has now gone out.

As I rose to take leave of our meeting, my heart still misgave me about his plans for national reconciliation.  But looking into his laughing eyes, and feeling the gentle warmth of his presence, my doubts began to melt away.

'You have chosen a hard path,' I said, 'but you will prevail.'

He shook his head, and pulled our handshake into a hug.  'No.  We will prevail.'

Akaash Maharaj (St Edmund Hall, 1990) is Ambassador-at-Large for the Global Organization of Parliamentarians Against Corruption.  He was the first person from a racial minority and the first overseas student to be elected President of the Oxford University Student Union, serving 1993-4.  His personal web site is www.Maharaj.org and he tweets at @AkaashMaharaj.