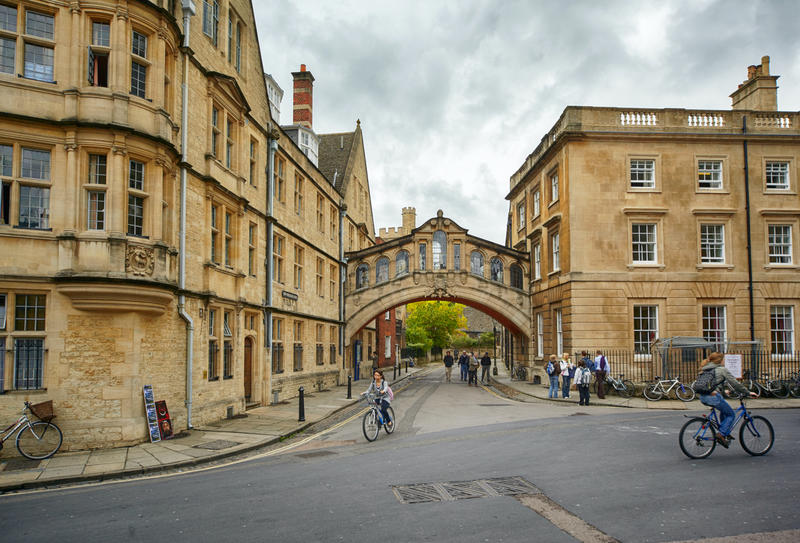 Tom Fletcher discusses Oxford, diplomacy and the importance of the digital sphere in the twenty-first century 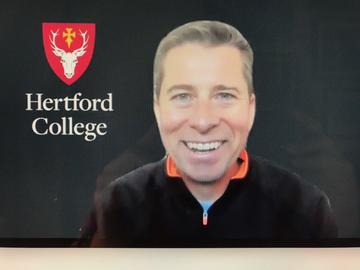 At 45 the youngest current head of an Oxford college and certainly the youngest ever at Hertford College, Tom Fletcher (Hertford, 1994) jokes that he’s gradually running out of such opportunities having previously been the youngest ever British ambassador, to Lebanon in 2011, aged a gingerly 36.

‘I’ve still got leeway on becoming the youngest Pope but this is unlikely,’ he jokes.

As for being so young, ‘It’s possibly part of a wider experiment with the model for heads of house,’ he says, reflecting on Hertford College’s decision to appoint him in 2019.

‘Traditionally it [a college head] is an august, eminent figure towards the end of their career and they will be a great name in their field. But for me this is not the end of my career and it is not my last job.’

Tom took up his role in September 2020, right in the middle of the COVID-19 pandemic.

‘I’ve had to adjust to realities’, he says, ‘the situation is more about keeping the ship steady in the harbour while the storm passes, rather than sailing off in search for new continents.’ 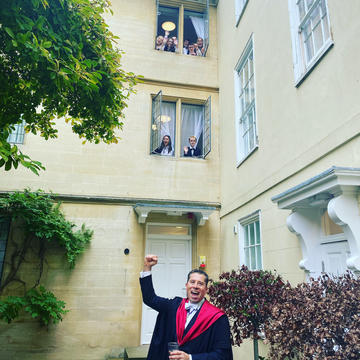 One photo (right) shows him celebrating a ‘virtual matriculation’ as new freshers at Hertford College took up their formal place at Oxford last October while quarantining, in no one’s imagination the ideal time to be a young and carefree student at the dawn of their adult life.

In another, he hands out trays of hot chocolate to parents dropping off their students at the start of the 2020-21 academic year.

His apparent ease with Hertford is no act – not only was he an undergraduate at the same college (Modern History), but JCR President, a one-time night porter, a junior steward, barman and even a summer school coordinator. Before his current appointment he was an honorary fellow.

COVID notwithstanding, Fletcher exudes a radiant energy and has a strong vision for his leadership of the college, which he likens to a continuance of his previous role as a diplomat by other means. ‘Education is upstream diplomacy.’ But he notes that his Hertford interview panels were unsure his experience negotiating with terrorists would be as difficult as handling an Oxford Governing Body.

In his popular book Naked Diplomacy: Power and Statecraft in the Digital Age (2016), Fletcher makes a very strong case for the importance of digital technology in communicating power and vision in the 21st century, extending to actual diplomacy between nation states.

As British Ambassador to Lebanon he became famous for penning ‘open letters’ in a blog format to Lebanon and all its citizens. They were both creative and candid and achieved wide traction in the press and were quite unlike anything you might expect from a traditional diplomat.

He notes just how clued-up youngsters are with digital tech – his eldest son Charlie is 14. Not to want to lead this edgy, difficult ‘communications space’ is to abnegate it.

He sees Hertford as a hub of extraordinary research and learning; as a pioneer of better access and inclusivity and new digital learning methods; as a thriving and friendly, inclusive community and as ‘the frontline for a better society’, which includes a strong climate change platform. None of this can forget ‘the business model’, but this isn’t separate from the climate emergency.

‘An Oxford college represents at any given time the exciting prospect of a new generation of young adults. What I want them to do is to take on the deep structural aspects of climate change and inequality, not to tinker with it at the edges.’

Fletcher follows in the strong footsteps of academic and journalist Will Hutton, a former editor-in-chief of the Observer who while at Hertford published How Good We Can Be: Ending the Mercenary Society and Building a Great Country (2015).

Tom is working right now on a book about the new survival skills, from finding a tribe to staying curious, a manifesto for ‘genuinely taking back control of the 21st century’.

He also says he has just written a murder novel, which beneath an enjoyable plot is all about the need for ‘zealous moderation.’ He explains:

‘The French diplomat Talleyrand famously spoke about the difficulties arising from having too much zeal – he said 'N'ayez pas de zèle’ or, roughly, ‘don’t be too zealous.’

‘…But his advice shouldn’t be confused with taking a back seat – if we don’t actively cultivate the middle ground other zealots and extremists will take it. My first boss said I might make something once I lost my zeal. I’m still trying. ’ 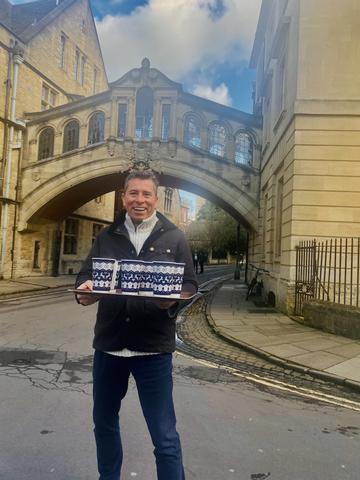 In Naked Diplomacy Tom fully acknowledges the need sometimes for compromise almost to the point of fudge, again doffing a cap to Talleyrand. But the heft of the book is a broadside at diplomacy stuck in the archaic language and customs of the 19th century. Increasingly, he argues, government and diplomacy are at odds with Twitter where anyone can instantly tear the veil aside and scream out the truth as they see it, or, increasingly, as they assert it.

Published in 2016 ahead of the BREXIT referendum in the UK and the election of a populist US President, Naked Diplomacy was prescient.

Demanding ‘a change of mindset by those in authority’, Fletcher argued powerfully that by vacating the digital sphere or filling it with bland rhetoric was desperately dangerous.

‘Leave that vacuum and it is filled with demagogues and extremists.’

Having worked directly with three Prime Ministers at Number 10 Downing Street as foreign policy advisor (2007-11 – Tony Blair, Gordon Brown and David Cameron) before heading out to a very innovative and celebrated stint as British ambassador to Lebanon, the book already reads like an ancient relic of better times. The mood is one of infectious energy, the London 2012 Olympic games and David Beckham fans in Beirut.

Roll forwards just five short years and he admits that his optimism has dipped, describing Britain’s handling of BREXIT as a ‘shambolic virtual firing squad that exposed us [Great Britain] as incompetent and divided.’ The broad, global, soft power of ‘assumed competence of Brits’ has taken a proper mauling, with real risks for areas of advantage, including higher education.

These less than auspicious circumstances reinforce the case, he argues, for taking a more muscular stance on the big issues, in whatever role one finds oneself – foreign policy adviser to Prime Ministers, Ambassador or head of an Oxford college.

To facilitate communication with students Tom has a ‘Virtual Principal’ channel on the messaging platform Slack, as well as all the favourites (Twitter, Instagram). He says his Instagram identity ‘tomfletcher1874’ was randomly handed to him by the picture hosting platform – yet the numbers are also the date that the modern Hertford was founded, a bizarrely pleasing coincidence.

In the world of Google search he faces a less convenient coincidence, from a purely pragmatic point of view – the lead singer of the English pop band McFly is also a chap called Tom Fletcher, and they get confused too much, he says. ‘For me, he is a nemesis, but one - to make it worse - who probably hasn’t heard of me.’

These are arbitrary and seemingly trivial digital details, a bit like the endlessly cascading twittersphere itself. Yet Tom’s point is that we have to take it very seriously indeed.

Before Trump was even widely known about, Fletcher was citing Mark Twain, ‘A lie can travel halfway around the world while the truth is putting on its shoes.’ 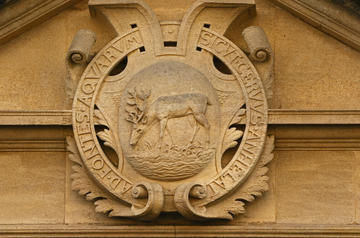 In a very different yet memorable example of unexpected cultural diplomacy, he cites in his book the extraordinary effect of a transvestite winning the Eurovision song contest in 2014 – Conchita Wurst of Austria, who ‘did more for [Austria’s] reputation as an open and liberal country than years of government speeches and press releases.’

Whereas the UK has since 1945 been fighting to decide what its tactical core message is as a nation (while carrying an diminishingly small stick with which to impose its will), he has no such doubts about Oxford, whose stature has grown in the same time and never as much as in the pandemic year with a certain vaccine.

So it will be interesting to see where Hertford goes next under his watch. It might be safe to expect some zeal.

Tom Fletcher CMG is a former Ambassador and No 10 Foreign Policy Adviser to three Prime Ministers; a former Visiting Professor at New York University; and chaired the International Board of the UK Creative Industries Federation. His Foundation for Opportunity quietly supports good people doing good things in public life. He Tweets under @TFletcher and can be found also at www.tomfletcher.global