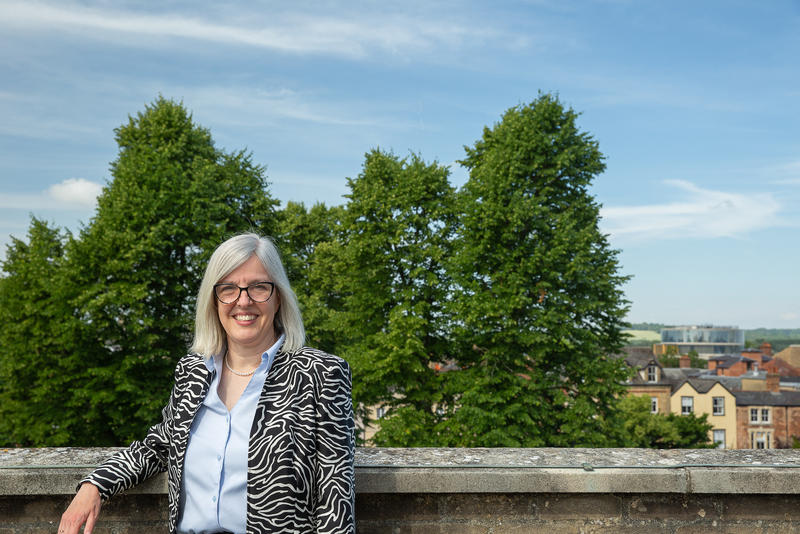 We are all epidemiologists now – except we are not

Until relatively recently, Professor Christl Donnelly laughs, most people were not even able to pronounce her line of work. More than two years on from the appearance of COVID-19, is there anyone who has not used the word ‘epidemiology’ in a pseudo-knowledgeable way – or even made their own attempt at estimating the spread/rate/infectiousness of the virus?

Aside from keeping in touch with friends and family, the self-deprecating Professor Donnelly does not do social media for very good reasons.

‘There’s a lot of unpleasantness out there. It can be very upsetting,’ she says. And she does not seek out media opportunities either – avoiding becoming a household name, despite being a key researcher in the statistical analysis and modelling of the pandemic.

Had this new virus been as serious as the original SARS virus, on which Professor Donnelly also worked, some 14% of people who contracted it would have died.

‘It’s often best left to other people [who like appearing on the television]...I only do them, if I feel it would really help people understand something.’

But Oxford University’s new Academic Champion for Policy Engagement is actually totally engaging and clearly cares a very great deal about the humans behind the statistics. She is also more than happy to talk about her work, the analysis, the modelling and what everyone thinks they know about it. She is well aware there are many critics of early COVID-19 transmission models (some of which she contributed to), predicting hundreds of thousands of deaths in the UK in an uncontrolled COVID-19 epidemic.

But, says Professor Donnelly, many of these critics do not take account of the public health interventions that prevented hospitalisations and deaths, and carefully consider what could have been the case - had nothing been done to reduce transmission. And, she points out, at the time the models were created, SARS-CoV-2 was still a new pathogen. We all understood much more about it two years on.

Had this new virus been as serious as the original SARS virus, on which she also worked, some 14% of people who contracted it would have died. As it is, the mortality rate from COVID – which led to many tragic deaths - has been about 1% internationally.

'We are lucky it was SARS, rather than COVID-19, that arose 20 years ago,’ she says with feeling. ‘SARS was only transmitted by people with symptoms – whereas, with COVID-19, transmission often happens before people showed symptoms.'

‘They were both completely new pathogens,’ she says. ‘In each case, we made the best of the data we had, but there were inevitable uncertainties. As you extrapolate, there are more uncertainties....’

She adds, ‘And who could have predicted there would have been a vaccine less than a year after SARS-CoV-2 was identified? It was astounding. We are extremely fortunate to live in a country which is able to offer the vaccine to everyone who wants it. Not everyone has that option.’

In both cases what they found was cases clearly went up when there was more mixing. There were super-spreading events of COVID-19, as there had been with SARS, indicating that choices people make could result in more or fewer illnesses.  Professor Donnelly and family have very much been on the cautious side – reflecting her understanding of the epidemiology: getting vaccinated, wearing masks, taking tests, meeting very few people face to face.

‘I would like to visit my family in the US,’ she says, still on the cautious side. ‘Hopefully, that will happen later this year.’

It was not supposed to be like this. Professor Donnelly attended a well-respected liberal arts college in Ohio – the next state to her home in Indiana – and she originally intended to become a vet, until ‘terrible’ animal allergies put paid to that plan.

‘After I was taken to the hospital with allergies, the cat went back to its previous owner,’ she says, recalling her disappointment in having to give up a new pet.

But, loving Biology (she would like to call-out Mr Manuszak, an inspirational teacher who had her running experiments at home) and being rather keen on Maths, she decided to take Population Biology and Genetics – which did not involve the memorising all the parts of animals [which she could not stand]. And it allowed her love of puzzles and problem-solving to come to the fore.

Professor Donnelly says with amusement, ‘I was the sort of child who did logic puzzles for fun. I did lots of them, books and books...I gave my own children those same books...nothing, they were not interested.’

She looks slightly perplexed, but not that much. She realises it was a slightly unusual hobby and accepts that not everyone shares her fascination with problems and statistics.

She grew up in the conservative US communities of Mishawaka and South Bend, although the Donnelly family were not the typical folks next door. Her parents organised trips to the ballet and museums in Chicago - and she and her brothers were encouraged to follow their dreams.

‘My mother told us we could do anything. She made things happen,’ says Professor Donnelly, who still describes her mother as unstoppable.

It worked out quite well – very well, actually. Both Professor Donnelly and one of her brothers are university academics. Her other brother became an IT specialist.

She had not really thought about being an academic, she says. In fact, when she was an undergraduate, she spent summers working for an insurance company, where her father was a lawyer. And she took actuarial exams, with the idea of working in the industry. She was good with numbers after all.

‘I decided, though, that I didn’t want all the numbers I worked with to have a dollar sign in front of them,’ she laughs. ‘And I didn’t want to go into clinical trials, which was the other obvious path.’

So, after graduating, she went to Harvard to do a Masters and then a doctorate in biostatistics– allowing her to follow her love for Maths and Biology.

‘It was challenging but super-interesting,’ she says earnestly. But isn’t Maths very male dominated?

‘There’s a very clear gender gradient – in pure Maths, there are more men. More women use Maths to do something applied. I wanted to make a difference… to do something useful.’

In her next ‘it wasn’t supposed to be like this moment’, the new Dr Donnelly decided to go abroad for a year after completing her Harvard studies. That was 1992. She has been in the UK ever since.

Initially, she was appointed a statistics lecturer at University of Edinburgh, where she taught final year ‘inference’ – [working out how you gain insights from data using statistics].

‘It was hugely helpful,’ she says. ‘Going through inference in such detail made sure I really knew it.’

Edinburgh had been an education in other ways as well – putting the young academic on a path to focussing on infectious diseases.  In the 1980s, the Scottish capital had become the European hotspot for HIV/AIDS, and the transmission rates had been very high.  Totally derailing her plan to return to the US, three years later, she came to Oxford to work in the then Wellcome Trust Centre for Infectious Disease Epidemiology.

‘It sounded fantastic,’ she says enthusiastically. ‘You could get as involved as you wanted’ in so many interesting projects underway in the Centre led by Professor (now Sir) Roy Anderson.

Even at the time, she did wonder at her bold decision, ‘I arrived with my suitcases by bus. I remember thinking “I’ve done it again” - arriving in a new city knowing no one for the second time in three years.’

But her move to Oxford was ‘transformative’, ‘life changing’. She says, ‘I found what I really wanted to do....there was problem solving, getting an answer, and it is worthwhile. It had impact – often immediately so.’

While Professor Anderson was her epidemiological mentor, Sir David Cox became her statistical mentor. She was definitely not in Indiana any more.

Infectious diseases were a particular interest, she says, because unlike chronic conditions, the risks do not tend to result from genes, but ‘from the choices you have made’. And she has spent her career working on statistics around infectious diseases from Ebola to bovine TB from Lassa fever to MERS. Initially she was at Oxford, but from 2000 at Imperial College, London, where a department for infectious disease epidemiology had been established.

She was to return though. And, in 2018, she became Professor of Applied Statistics at Oxford. From September 2022 she will be the Head of Department. But she has remained a part of the Imperial team and has students at both institutions.

‘It was the opportunity of a lifetime,’ she says, to come back to Oxford.

Professor Donnelly is full of admiration for how some of the media has carefully followed the pandemic – becoming well-informed right across the science. But, right now, she says, rather despairingly, people are saying that viruses (almost deliberately) become more infectious over time. ‘That trend is simply because we only see the ones that are more infectious.’

Less infectious strains spread less, and so we rarely see them. But, speaking in Spring 2022, she is concerned about rising infection rates, especially among the over 55s.

‘There is a slight increase. It could be a result of waning vaccine effectiveness. [That age group had their booster vaccines in autumn 2021].’

Back in early 2020, she says, there were few signs COVID-19 was going to lead to the pandemic that has swept the world. ‘Initially, we didn’t know how quickly it would spread.’

But, she adds, ‘One thing that makes a disease more easily controllable is symptoms appearing before spread. COVID-19 did not transmit in the same way. [Transmission often happened before symptoms]. It was an extremely difficult, new pathogen.’

Creating statistical models for infectious diseases is challenging, to say the least.

Professor Donnelly says she is quoting someone else, but she says with emphasis, ‘All models are wrong.’

Does that mean they are a waste of time? Not at all, she adds, ‘Some are useful. Just because it’s “wrong” – in the sense of simplifying reality – doesn’t mean it cannot give useful insight.’

She explains, ‘You can always come up with scenarios where there are fewer cases and fewer deaths and there are trade-offs to be made.’

Imagine if the death rate had been that of SARS...Professor Donnelly blanches at the thought, ‘It’s extremely difficult to control transmission if the transmitter doesn’t yet have symptoms.’

You get the sense it really is personal for Professor Donnelly, who definitely takes her work home with her, coding and writing reports late into the night to come up with answers. On one occasion, she recalls, it was so late, when she had worked out a model, that she could not wake anyone to tell them what she had found.  She had to wait until morning to warn colleagues.

‘It was startling,’ she says. ‘Sometimes deadlines have been a bit too demanding. But it’s very motivating and rewarding – and stressful.’

What about COVID? Has it been beaten?

Ever the slightly scary statistician, she says, ‘It’s hard to believe there won’t be a few surprises out there. You can’t know what future variants will look like.’

As a way of reassuring, but not, she adds, ‘I would love to return to the way things were, and see my family in the US.’

She concludes cautiously but not entirely confidently, ‘I’ve got tickets for Elton John for 2023 in the O2 Arena.’