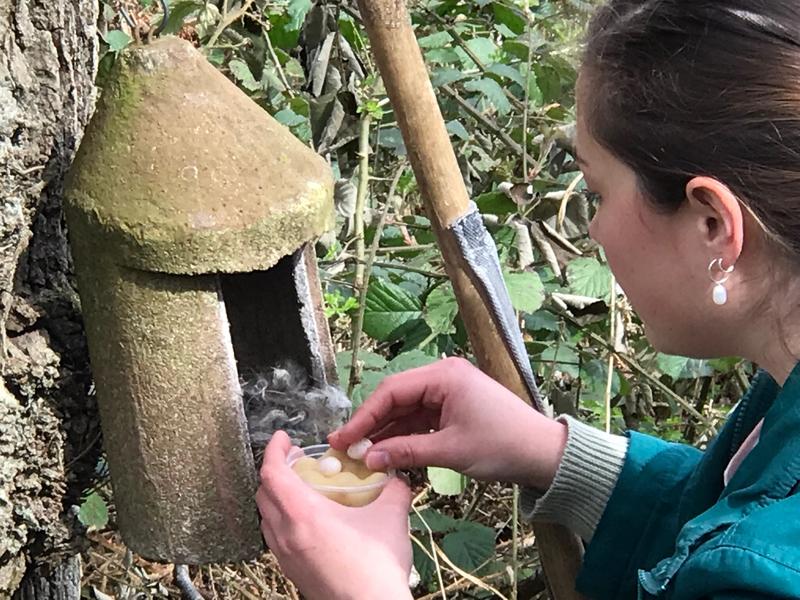 For 75 continuous years, researchers have studied the great tit population in the University’s Wytham Woods. We explore the findings.

27 April, 2022 marks the 75th anniversary of the start of a remarkable population study of great tits in Oxford University’s Wytham Woods.

The study has run continuously since that spring day 75 years ago, on 27 April 1947, the day that the first eggs were laid in a population of great tits that was just beginning to be studied.

Professor Ben Sheldon, Luc Hoffmann Chair in Field Ornithology and Director of the Edward Grey Institute of Field Ornithology in the University of Oxford's Department of Zoology, notes that in 2022 the first eggs to be observed were laid on 28 March, just one day short of a month earlier than in 1947 – an observed effect of climate change leading to earlier springs, he says.

But the research is vastly richer and broader than this initial insight suggests, important though it is. Not only is this study one of the most famous in population ecology in the world, but a celebration of what Oxford is very good at, careful scientific research and the fruit of numerous inputs from numerous gifted individuals working to a broader purpose with public benefits. 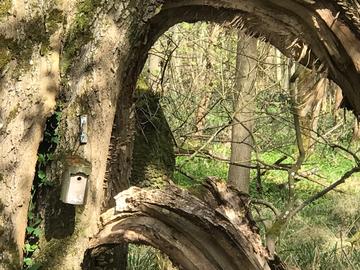 The sun filters beautifully through the tall skeletons of ash trees, none of which have yet unfurled their leaves – usefully allowing lots of sightings of great tits flitting around in the canopy.

The obvious question is how the study came to be, and why great tits rather than, say, roe deer or rabbits?

One answer is partly staring us in the face from a bramble: a robin.

Professor Perrins explains, ‘The original founder David Lack made his name studying robins. There was a lot of interest in the 1940s and 50s in population ecology and population studies. But to study robins at scale is very difficult because they nest secretly in bramble banks and ditches – very hard to consistently track, whereas tits will take up residence in bird boxes, allowing them to be monitored, ringed and tracked.’

The bird boxes Wytham uses are made from woodcrete – a combination of cement and sawdust- to prevent vandalism by squirrels and woodpeckers, and a familiar sight to anyone walking within the woods.

Lack began the research programme with the steadfast help of a mature law student, ex-WW2 forces, John Gibb. Professor Perrins then headed it from 1957 to 2002, but is still actively involved in the work today, an outstanding track record.

Professor Perrins says that the other factor in deciding the shape and nature of the research was needing a resident bird. ‘If we had chosen chiffchaffs, they migrate – no good for this sort of study.’

He adds that if we rewind the clock to the 1940s, ‘we just didn’t know much about any bird or animal populations. Births and deaths, longevity; whether they move around; the extent of their habitat. We’re talking about the fundamentals of how a population works.’ 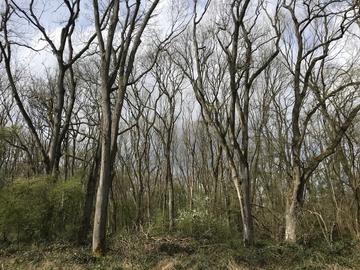 One enduring insight of the study is how the birds have evolved sensitive environmental awareness, laying eggs timed so that they hatch to coincide with the hatching of the eggs of several caterpillar species, the main food source for great tit chicks. The caterpillars themselves feed on newly-emerged deciduous leaves, particularly on oaks.

This is another reason why the semi-ancient, mixed woodlands that predominantly make up the 1000 acres of Wytham are so important.

Ash go into leaf late and are suffering from die-back – a real concern. The moths, and hence the great tits, will most probably rely on beech trees and oak trees going forwards.

Dr Cole says that the tit winter survival rate is very high after an autumn  when beech trees produce bounteous nuts ( a mast year), but the trees do this only in certain years and we have no ability to predict it, or exactly how they are all synchronised to mast together.

There is perhaps also a degree of relief that the original researchers didn’t set out to observe redstarts, nightingales or willow tits, bird species that have declined dramatically across large swathes of the UK.

‘There are no nightingales in Wytham any more,’ says Ben – but offers that there will likely be a couple of pairs of cuckoos back this year, down by the edge of the wood bordering the River Thames.

Over a thousand nest boxes demand constant checks from numerous field workers, one of them Hungarian DPhil student Anett Kiss. She is responsible for 220 boxes in a part of the wood that leans towards Botley, including some of the first boxes to be put up when the study began in 1947.

The day we visited, April 8, led to the following verbal note by Anett:

‘A lot of the [nesting] boxes are now occupied; some have eggs; but no chicks yet. Temperature is the major arbiter and the cold snap of the previous week may have led some nesting pairs to delay.'

If all has gone well, there will be chicks by now.

Ben also noted that being able to track parents and offspring of the birds across the generations offers many other insights.  Almost every year there is a case of inbreeding, where close relatives breed together; the chicks survive less well and have even been seen to have deformed feather growth.

Inbreeding can be a particular concern when populations fall to a low level and there is no choice but to breed with a relative; for most species – such as the great tits of Wytham - this is why most chicks leave the nest site to make their own lives elsewhere.

Endearingly, the researchers have also observed mixed clutches where eggs are laid by blue tits but hatched by great tits or vice versa, the parents apparently happy – or perhaps unaware – that they nurture a mixed brood.

Once again it happens once or twice a year out of a population of hundreds, evidence for the serendipity of nature and the ways that species are sometimes flexible in their affairs.

Professor Sheldon says that the 40-odd generations of great tits that have been observed over 75 years (they live just less than 2 years on average) would take us back to before the Norman Conquest if realised as a human equivalent. 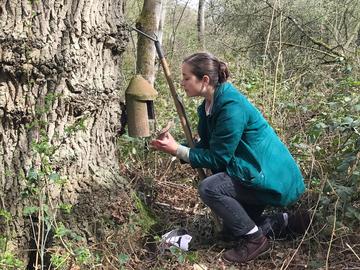 The illustration is suggestive of Oxford’s broader ability to conceive of longevity beyond the life span of any individual, whether feathered or human.

The Edward Grey Institute (EGI) was founded in 1938, having grown out of the Oxford Bird Census, itself founded in 1927.

It took its name from Viscount Grey (Balliol, 1880) at one time Chancellor of the University and UK Foreign Secretary, and a lifelong birdwatcher, perhaps best known as the man who remarked, on the eve of the First World War: ‘The lamps are going out all over Europe; we shall not see them lit again in our lifetime.’

Professor Perrins also adds with a chuckle that he was the only Chancellor of the University who was sent down for laziness, ‘you had to work very hard at that in the 1880s!’

Bird watching might have morphed into behavioural ecology and population ecology, but the inheritance of the Victorian era naturalists is enormous, as is the gift of Wytham Woods to Oxford University by the Colonel Raymond ffennel in 1942.

The sum of all these inputs is invaluable research that will be in great demand as climate change demands an intelligent response, rooted in science and not just knee jerk policy initiatives, and what we now know about great tits from 75 years of patient observation will be an important part of that, and of course going forwards into the next 75 years.

Wytham Woods form an iconic location that has been the subject of continuous ecological research programmes, many dating back to the 1940s. The estate has been owned and maintained by the University of Oxford since 1942. The wooded parts of the Wytham Estate comprise ancient semi-natural woodland (dating to the last Ice Age), secondary woodland (dating to the seventeenth century), and modern plantations (1950s and 60s). The fourth key habitat is the limestone grassland found at the top of the hill. Other smaller habitats include a valley-side mire and a series of ponds.

The site is exceptionally rich in flora and fauna, with over 500 species of plants, a wealth of woodland habitats, and 800 species of butterflies and moths. Wytham Woods are often quoted as being one of the most researched pieces of woodland in the world. Covering 1000 acres, they are designated as a Site of Special Scientific Interest.