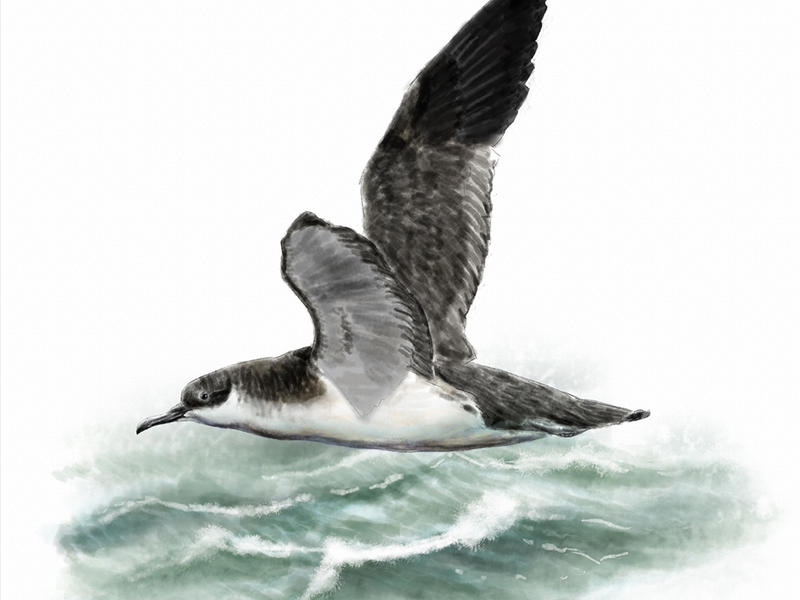 A new study shows how small seabirds, Manx shearwater, have mastered the art of working smarter not harder when soaring at sea

A new study published in Science Advances proves it is not just albatrosses that perform the aerial acrobatics needed for dynamic soaring on the windy open ocean. The research shows that sleek seabirds called Manx shearwater perform the same feat of flight in the seas around the UK.

Albatross glide in a corkscrew motion to harvest energy from the wind gradient over the ocean surface, where the wind gets faster with height. This method of harvesting wind energy to conserve effort is called dynamic soaring and explains how albatross can travel thousands of miles across the oceans whilst barely flapping their wings.

Using bird-borne video cameras and GPS loggers, researchers from the Department of Biology, University of Oxford have shown that Manx shearwater also use dynamic soaring. The key difference is that by flapping their wings for part of the cycle, shearwaters can perform the same feat of flight in weaker winds.

The weaving and undulating flight characteristic of dynamic soaring was first described scientifically in 1883 and was noticed nearly 400 years earlier by Leonardo da Vinci. It has, however, remained a remarkably difficult phenomenon to prove.

‘Demonstrating experimentally that a bird harvests energy from the wind shear gradient is very difficult, particularly in flap-gliding birds like the shearwater,’ said James Kempton, co-lead author of the study, ’so we developed a new way of calculating energy harvesting by modelling the shape of their flight trajectories in relation to the wind.’

The researchers analysed video footage recorded from the backs of shearwaters skimming at speed over the Irish sea. By using this to compute the birds’ weaving and undulating motion relative to the wind, the research team were able to establish when the shearwaters were using dynamic soaring to harvest energy from the wind rather than expending their own energy.

GPS loggers provided behavioural data from over 200 birds on their preferred direction of travel in different wind conditions. Analysis of these GPS data revealed that not only could shearwaters employ dynamic soaring to harvest energy from the wind like the albatross; they also actively chose conditions that provided an opportunity to work smarter not harder.

‘When the winds are stronger, shearwaters actively travel in a direction that uses those winds to the greatest energetic advantage,’ said Dr Joe Wynn, co-first author of the paper. ‘However, we only see this on the outbound flight to feed and not when the birds need to return to the colony regardless of the prevailing winds.’

Unlike earlier approaches to analysing dynamic soaring, the approach developed by the authors could be applied to a variety of species, even birds not traditionally associated with dynamic soaring such as gulls and falcons that may be using the same flight technique less conspicuously.

‘Our results show there are energetic savings to be made by weaving through even quite weak winds, as long as you’re willing to put in a bit of effort to get a big payback,’ said senior author Professor Graham Taylor. ‘The fact Manx shearwater do this suggests that small drones could pull the same trick to extend their flight range and duration when patrolling UK coastal waters.’

The full paper, ‘Optimization of dynamic soaring in a flap-gliding seabird affects its large-scale distribution at sea,’ is available here.