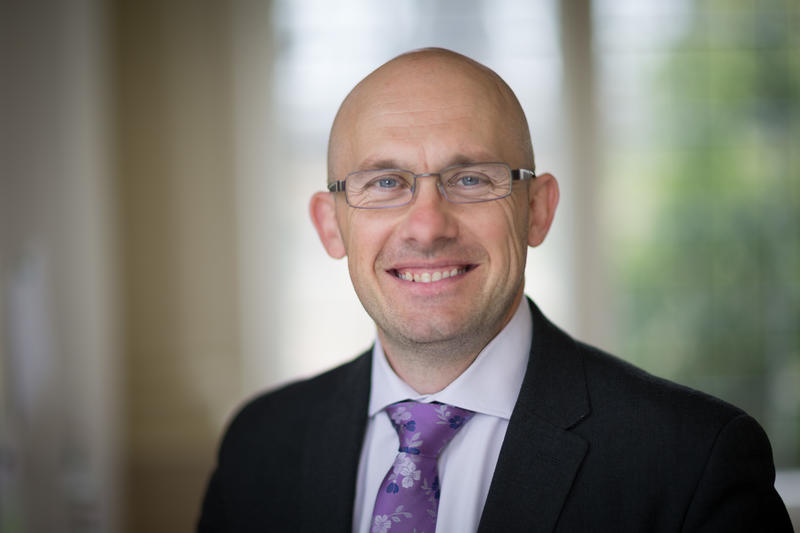 Professor Mike Bonsall is so evangelical about his subject and such an enthusiastic academic, with a particular passion for insects, it is hard to imagine him as anything other than an Oxford professor of Biology with mosquitos in the freezer. But he also tells a very good story, recalling how he nearly took a different path in life.

I had faced a choice, when I was leaving school. I could join the RAF or do Biology at university [pause]…They [a friend] asked which I had decided to do...I mean, I’m not wearing a uniform!

Professor Bonsall’s acute sense of humour is evident. It is a very hot day but, for more than an hour, he has been explaining his wide academic interests and research, with undimmed enthusiasm and energy.

‘I like playing in other people’s back yards,’ Professor Bonsall explains genially, talking about genetically modified insects, which could help battle malaria; Maths, which can help solve biological problems; his involvement in wine production (don’t ask); his projects on mental health treatments; calculations of the likelihood of human extinction; and, not for the faint hearted, the threat of bio-weapons, the need for bio-security and a policy to go with it.

Professor Bonsall is Associate Head (Education) for Oxford's MPLS Division and leads the Mathematical Ecology Group in the Department of Biology. He could easily appear in a recruitment video – for Biology.  With mathematical problem solving, Biology, he insists, is the subject of the future.

‘It’s always played second fiddle to Physics and Chemistry,’ says a buoyant Professor Bonsall. ‘But I’m a strong advocate for Biology. Chemistry and Physics have had their day. It’s Biology’s time now, without a doubt.

In the shadow of the COVID-19 pandemic, it is easy to imagine what some of those problems might be.

‘It is quite scary,’ admits Professor Bonsall.

‘Bio-security is something we need to be taking very seriously’, he maintains.

‘There needs to be a lot more resources placed into that. With emerging regimes and all of these molecular tools growing, we’re going to need strong bio-security in place, protecting national borders, it’s super important.’

That sounds quite scary?

‘It is quite scary,’ admits Professor Bonsall, who was working on bio-security proposals six months before the pandemic. ‘It’s not that hard to think how things could all go horribly wrong: what people are developing – thinking through what that might look like…. If I were going to push anything, that would be it.’

‘We need capability in place. It needs to be taken seriously, and become part of the national infrastructure,’ says Professor Bonsall, who is painfully aware some biological advances – which produce immense benefits, for health, agriculture and industry - also have destructive applications.

But what can we do? How could we respond to such threats?

‘It is important to have policies and measures for dual-use technology, and to think where hazards are coming from,’ he says.

At the same time, Professor Bonsall says, Biology needs to come up with answers, ‘If we see a novel pathogen, can we backtrack, can we understand where it’s got to, where it’s spread, where it’s come from? Has it emerged from a bat, a bird, was it engineered in some way?’

With science moving very quickly in this area, he is clear about the need for regulations to catch up and respond to innovation.

Professor Bonsall adds, ‘We need to think through the sort of things that we do. Gene editing, for example, can be used to solve some real-world agricultural problems. But you’ve got to think about the risks associated with that.’

He maintains, ‘We need to be much clearer about who is responsible for setting standards and what is acceptable. Should it sit with a government department or a new body?’

Professor Bonsall is anything but opposed to advances, perceiving the incredible benefits that could be forthcoming from the technology that was, even five years ago, considered very difficult. Currently, he is working on ‘gene editing’ malaria-bearing mosquitos, which could potentially help eradicate the illness, alongside vaccines.

‘Malaria within the right framework and with the will is a solvable problem,’ he says. ‘It really needs the political motivation to make it work. Science is opening up vistas we haven’t had before…the tools that molecular biology is providing us with – it is a unique set of ways, in which we can edit organisms.’

He laughs seriously, ‘It could all go wrong…but we understand the science of this, understand about limiting spread, there are lots of restrictions but…for lots of reasons, science communications [have been] poor.’

‘We’re doing a single gene edit on a mosquito to control malaria, and that is very strictly regulated, but there is nothing to stop a whole new genome being released into an environment [he gives the example of weevils introduced in the US to control thistles, which have now run amok].’

‘The regulatory frameworks are fantastically different,’ he says. ‘It’s super-highly-regulated in my space, but there are no bio-controls of a whole genome.’

‘The approach you take matters, making sure our regulatory framework is proportionate and not preventing innovation. There is lots of cool science coming out daily…that’s why I got interested in Biology. I’m in awe of the natural world.’

From bio-security to gene editing to the future of humanity, there are a lot of philosophical questions around Professor Bonsall’s work.  He insists, ‘Maths helps us frame those questions. But it’s important to have a group of people with diverse skills - with Maths, Biology, Philosophy.  It’s a melting pot. I love it. ‘

He adds, for the umpteenth time, ‘It’s really cool.’