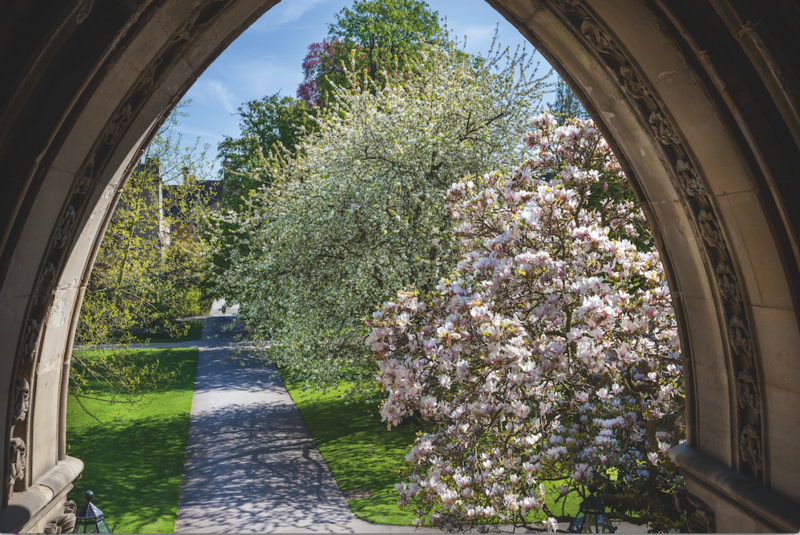 Tim Richardson (Pembroke, 1986) describes over 300 ‘academical halls’ in Oxford, at their height in the mid-1400s. They preceded the colleges and sometimes commanded fantastic names like Cabbage Hall and Caterpillar Hall. They were typically small and some were pubs disguised as academic enterprises. All were knocked down or absorbed by colleges, except for one: St Edmund Hall, the clue in the name.

When we speak by phone about his revised (for 2018) book Oxford College Gardens, Richardson mentions the hundreds of halls as an important but neglected episode of Oxford’s history, so I thought I’d note it immediately.

But my first question to Tim is whether in describing college gardens partly in terms of their architectural character there is anything collectively to be said about Oxford colleges versus Cambridge colleges. No harm, I thought, in starting off with a big question, and not out of a trivial desire to score points against Cambridge but to see whether there’s an answer.

There is, he insists without hesitation. 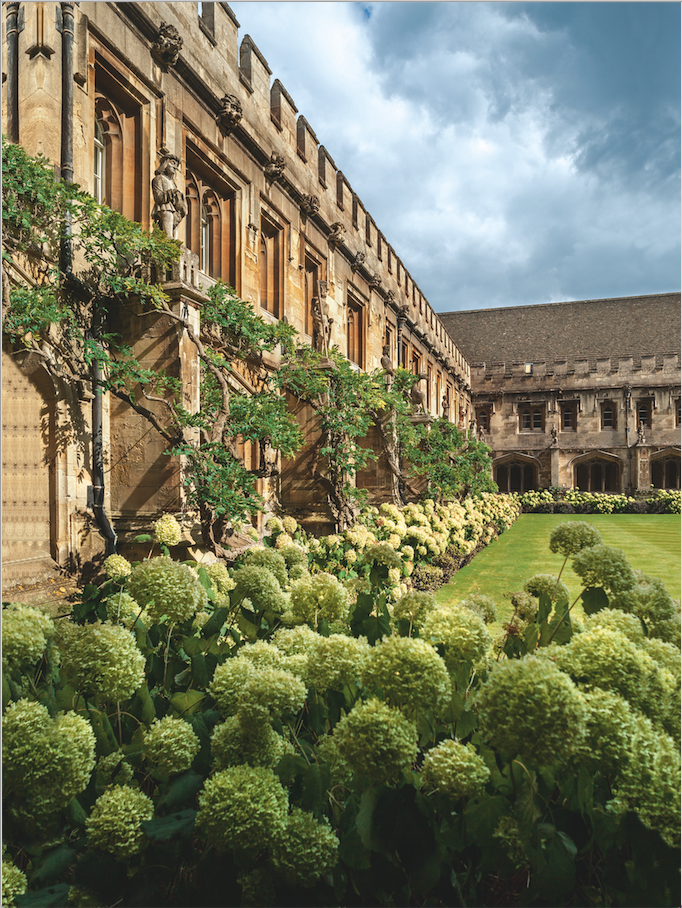 Magdalen: The cloister, with Hydrangea arborescens 'Annabelle' and wisteria.

Judging that the colleges in both universities are unique individually and collectively, Richardson says that Cambridge colleges tend to have far fewer, but larger, quads; and that of course they are called courts, not quadrangles. The reason is not equivocal nomenclature but because Dr Caius (of Gonville and Caius College fame) saw in the 16th century that foetid air might collect in enclosed spaces and good air circulation was crucial to the avoidance of this.

The resulting Cambridge style was modelled on such a ‘sanitary court,’ often with open corners, not the closed quadrangle of Oxford.

Cambridge tends to have more trees and more of a gardening feel, says Tim; ‘a greater sense of spaciousness.’

Oxford colleges, by comparison, may have 3 or 4 quads lending them a more intricate or even secretive air; a delight or a trap depending on how they have been arranged, plus the budget and imagination of the gardeners.

One example comes straight to mind. Lady Margaret Hall has just acquired a new quadrangle at the front of the college, permitting the formerly very formal ‘keep off the grass’ quad in front of Talbot Hall to be turned over to a wild flower meadow. Nice for butterflies and two fingers to tradition.

The whole history of Oxford’s college gardens is similarly replete with experimentation, ups and downs, vigorous bursars or the lack thereof (not always bad), college extensions and to a small degree fashionableness.

‘Kitchen gardens were the starting point in the 13th century,’ says Tim. ‘But they became more ornamental and decorative over time. A grape vine would be grown and then an arbor develop where people could sit in the shade. An element of leisure set in.’

He notes that the 17th century saw a high point in completely useless but intricately conceived ornamentation – consider Wadham, he suggests, in the life time of Sir Christopher Wren.

The 18th century was a time of expansion, when there was still plenty of room to manoeuvre. The Victorian years were years of a slightly more relaxed approach, where the Romantic tradition imparted a picturesque, ‘in search of the sublime’ quality with nooks, crannies and wild bits, later the inspiration for Charles Dodgson’s Alice in Wonderland and perhaps even the uncanny - the book ends with an intriguing afternote on page 312 about the Trianon Adventure, involving an Edwardian ghost story claimed as true by no less than Anne Moberly, who became first Principal of St Hugh’s, and her close friend Eleanor Jourdain.

‘So what’s your favourite college garden,’ I ask, rudely interjecting like a metropolitan journalist hungry for a story.

Instead of hedging his hedges, Tim answers without hesitation: Worcester. Why? Not only has the head gardener Simon Bagnall developed a strong vision (a staff of eight helps), but the college itself is vastly underestimated and therefore under-visited, in comparison with some other colleges.

The thing about Worcester is that it has everything and more. ‘Worcester has a lake,’ begins Tim’s chapter on the college. ‘It has an arboretum and sumptuous herbaceous borders. An Arts and Crafts rose garden. Velvety lawns, a ‘hanging garden’ and an orchard. It even has a cricket pitch.’ 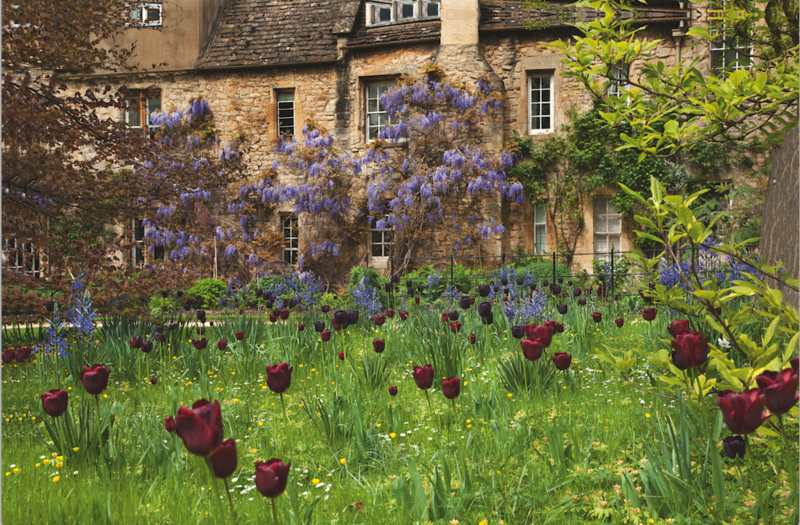 'Queen of Night' tulips and camassias growing in the Nuffield Lawn, with the rear of the wisteria-clad 'cottages' beyond.

Situated to the front on a very busy road, the set piece jaw drop moment with Worcester is stepping inside the lodge, to behold a sunken quad and mature trees in the distance. Tim describes this brilliantly. Owing to the Benedictine origins of what was until 1714 Gloucester Hall (another dissolving of an academical hall), the main quad is ‘lopsided’ with cottages down the southern edge. But it’s fantastic.

‘The key, perhaps, is the way the west side of the quad is bounded simply by a wall, with the trees in the Provost’s Garden and beyond providing a sylvan backdrop and also an exhilarating sense of release and escape, as if one is in a large room with a full-width window.’

I agree whole heartedly with this, but only Tim can put his finger on quite why – he says it’s the ‘least claustrophobic quad in Oxford.’

This is only the start of a bountiful narrative of the college, within a sensitive awareness of its architecture. From the famous ‘corner bed’ that is replanted every year differently, to the canal that borders the college and the magnificent horse chestnuts over the lake; the orchard that produces juice, the vegetable gardens that contribute to the common table, and even some patented mowing patterns that have acquired a cult following among certain groups of students. If that’s not enough go there in search of Worcester’s red Abyssinian banana plants. It’s a riot.

None of this is to throw the other 37 colleges into any sort of shade. Richardson is as consciously delighted and surprised by relative unknowns such as Wolfson as he is sustained by perennial favourites.The only possible shadow lies in future decisions by colleges to contract garden maintenance to commercial providers where there is no sense of belonging.

For now, there are a dozen colleges with no gardener, and most, we might agree with some relief, employ staff from the University Parks who certainly know their succulents from their sycamores. The main reason for this is simply size, with central colleges like Hertford having smaller gardens. But it would be a great mistake to forget that gardens and architecture complement each other and form the major part of what makes the University remarkable, aside of course from its members.

Andrew Lawson (Pembroke, 1963) is the photographer for the entire book and an artist based in Charlbury.

Tim Richardson (Pembroke, 1986) is a garden historian and critic of contemporary landscape architecture whose published work includes English Gardens in the Twentieth Century and Great Gardens of America. He writes regularly for newspapers and magazines having previously been gardens editor of Country Life and lanscape editor at Wallpaper* magazine. He created Oxford University's adult education course on lanscape history and serves on the gardens advisory panel of the National Trust.