CYCLING ACROSS AFRICA AFTER A DEGREE IN DEVELOPMENT, PART 1

CYCLING ACROSS AFRICA AFTER A DEGREE IN DEVELOPMENT, PART 1

It was in the fairy-tale-like bubble of little Oxford in the land of the North, that an idea to journey home through Africa – and to what I had learnt to be known as part of the “Global South” – was sparked. Queen Elizabeth House, where I did my MSc in Economics for Development, is a hub of wonderful people doing interesting work for development in Africa. As wide-eyed students, passionate about development we heard data backed stories of poor people’s lives being dramatically improved - or sometimes not - by a myriad of development initiatives. I’d seen poverty and hardship in South Africa and other parts of Africa too. But I’d also come to know many “poor” African people as strong, full of wisdom and hope. Many lead lives that are beautiful in some aspects that ours in the “Global North” are not. I wanted to meet more people living in low income communities and hear their side of the story. And so my brother and I, accompanied by other South African friends, decided to spend a year cycling from Cairo back home to South Africa.

Why ride a bicycle? Robbie, my brother, and I and grew up with cycling being a natural way to experience a new area. It’s slow enough to properly get the feel of a place. Slow enough to hear different perspectives from people in the same area. Doing it on a small budget means shopping for food, finding water and making cooking fires in the same places as the locals. This allows for a very special connection with people along the way. With the decision made, the planning started. It was when we had a list of the countries we would pass through, that the breadth of the Oxford network fully sank in. I could write at least one person’s name next to each country on the list. This network has been a great blessing throughout the trip: granting us connections with people doing development work on our way, warm hugs from friends far away from home, and very kind hospitality. 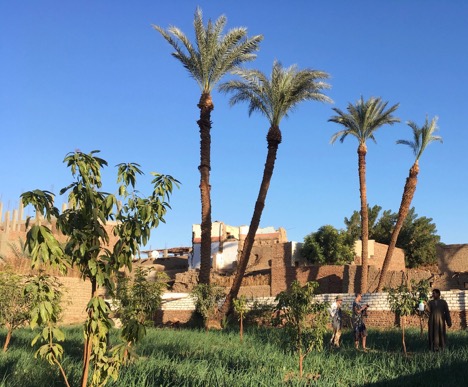 We followed Ashraf around the farm he was working on, asking him questions about life

Most of the planning completed, in January this year, we found ourselves in Cairo – a music student and three fresh graduates of engineering, landscape architecture and development economics respectively – about to embark on a journey home. We assembled our bicycles in the airport lobby. Looked out the window to see which side the traffic was driving and then fixed our rear-view mirrors on the left-hand side of our handlebars. We pushed the first peddles of a journey that would be about so much more than the bicycles. People who don’t know Africa often ask, “But, is it safe? Aren’t you scared?”.  We were scared that first day. Navigating the broad roads in Egypt’s giant capital is nerve wracking. We felt small cycling on the system of massive highways with fast flowing traffic. There aren’t bicycle lanes, like in Oxford.  Unused to the weight, I nearly toppled a few times. Safe at last, we found ourselves at the entrance of a friend’s apartment. Crossing those highways in Cairo remain the least safe I’ve felt on the journey thus far.

Our first host – with her motherly warmth, genuine generosity and pride for her culture – gave us an early glimpse of the type of people we would be meeting all the way home. These people would make us feel safe and at home when home was very far away. They would share with us many of the simple joys of life. It wasn’t completely unexpected that Heba, our host, was so, so wonderful – if the only other Egyptian I knew was anything to go by. Selim grew up in Egypt and was a class mate at Oxford. When I told him about the plan to cycle through Egypt, he first told me I was mad (as did many other Egyptians we subsequently met), and then invited me for coffee to help with our route and tell me, with great excitement, about the wonderful history and culture of Egypt. Unfortunately, we were pretty much the only tourists visiting some of the ancient and deeply spiritual places he had suggested. Egypt has seen a dramatic decline in tourism as the threat of terrorism has been seemingly exaggerated in the media. 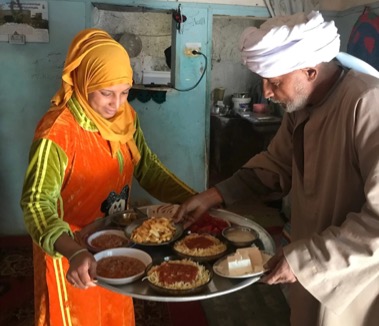 Consequently, as we soon became familiar, a special Tourism Police Unit exists to ensure the safety of foreigners. For cycle tourists, this means driving behind at snail’s pace as we go about our business. Having experienced how friendly the locals were before we bumped into the police – who were naturally reluctant for us to waste their time stopping to chat with locals on the road – it became a game to find the back roads to avoid the police. This took us on donkey cart tracks along the canals feeding off the Nile, the ancient life blood of the country.

We cycled passed families sitting on canal banks, eating delicious meals straight from their own farm. We were invited into homes where we saw the strong hands of loving mothers and grandmothers and sisters prepare the food. I vividly remember watching a grandfather on his veranda, looking lovingly at his grandchild on his knee. I remember marvelling at the wealth that these people have, these people who have been told that they are poor by one development agency after another, struck me. A wealth of time to be with loved ones. To really be there, their thoughts focused on nothing but that present moment.

We have come to know this wealth of time ourselves over the year. Not that we aren’t busy. Most often our hands are busy on the handlebars. Sometimes they prepare food. Sometimes they shake hands. Because that is where they need to be that moment, we don’t have to worry about what needs to happen next or what has happened before. We can enjoy the sounds of the birds around us. The breath-taking view over mountain tops in Ethiopia, the sparkling blue of lake Malawi, the glint in a clever child’s eye. When it is time to stop for lunch, we know there will be a village nearby. There will be wholesome food and an understanding restaurant owner who doesn’t mind us dirty cyclists exploding (ontploffing, as we’ve come to call it – the Dutch word for ‘explosion’) all over her clean tables. If she doesn’t have something we are looking for, she will ask the restaurant next door to bring it over. Of course, life is much easier for us than many people we have met along the way. We have cash to meet our basic needs and more in the bank if something goes horribly wrong. This simple way of living is an impermanent phase. Yet there is this beautiful middle ground we have found between meeting our needs and living away from fast-paced consumerism. I so wish that both rich and poor could find some of the joy we have in this in-between-space. 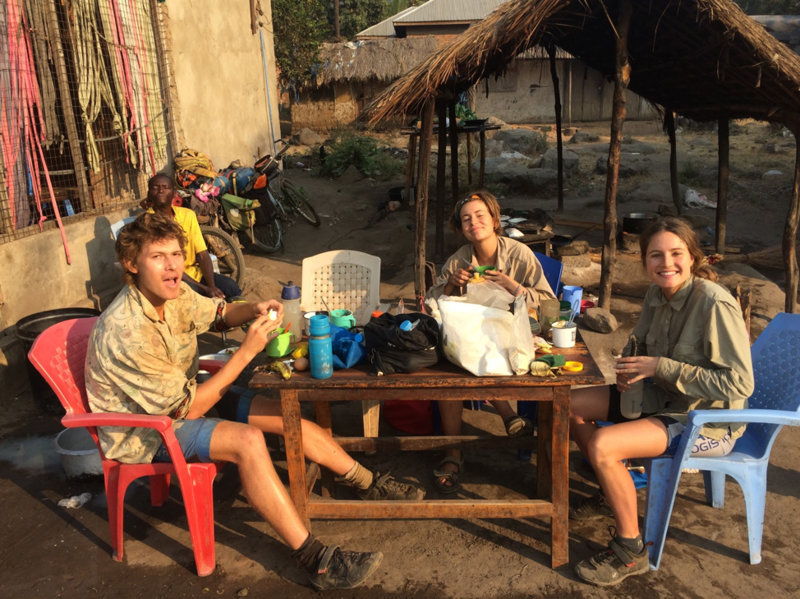 'Ontplofing', from the Dutch term for 'explosion'

One of the first meaningful conversations we had about development was with the farmer we stayed with in Luxor, Egypt. Ashraf offers his services as an agricultural consultant for free to those who cannot afford them. He taught us many, many things in the few days we spent with him. Two stuck out. First, farming brings him and those around him true joy. The loving interaction he has with his plants is something he thinks everyone in the world would benefit from – “even Barak Obama”, he told us. Second, development organisations need to listen before they do. Three years are enough to understand the complexity of a community before they can try and help, Ashraf reckons. Otherwise the consequences are quite often disastrous.

Us following Ashraf around the farm he was working in, asking him questions about life

With his refreshing insights and zest for life in our hearts, we cycled on to Aswan. Here, for the first time we meet Black Africans, descendants of ancient Nubia. Since 2000 BC the Nubian people have experienced periods of flourishment as an independent civilisation. They have also experienced complete devastation, most recently, as they were forcefully removed to make way for the building of Lake Nasser. The young men we met in Aswan exemplified the strength of character and cultural pride that comes from such a history. Ali, an entrepreneur and tour guide, along with two of his friends took us riding on their camels over the sand dunes. A gift, he told us, for fellow Africans. They explained to us how sick people heal themselves by spending days submerged beneath the pure red-brown sand. We lay in the dunes, listening to music and trying to soak the goodness in.

Dubbed ‘Team Pole Pole’, see the website of Michelle and her fellow cyclists.

Launched in 2017, the Oxford Black Alumni Network connects hundreds of black Oxford graduates with peers from across the generations. Through these connections and sharing their achievements, the platform allows them to be power players in the University’s legacy, future, and access to higher education in general. For current and aspiring Oxford students, their experiences are an encouraging appeal to dream bigger, achieve their goals and follow in their footsteps.

South African Michelle Rorich (St Antony’s, 2017) graduated in 2018 with an MSC in Economics for Development. She says, ‘I left Oxford eager to learn more about development from a grassroots perspective and so decided to spend the year travelling from Cairo to Cape Town (home) to better understand what development means to the people we would meet along the way.’ At the point of publication in November 2019, she was still cycling with four other South Africans, but in the New Year she will aim to write up the trip in a publication and pursue a career linked to sustainable agriculture in Africa.