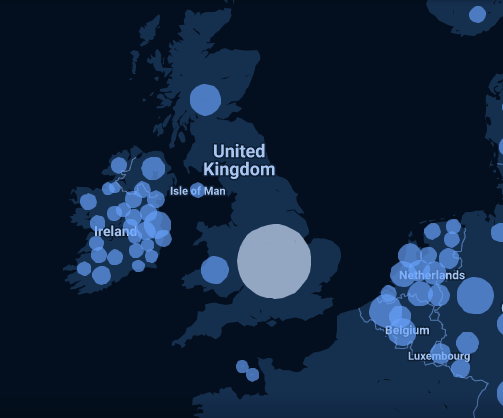 Potential COVID-19 hotspots can be identified using a new online tool from Oxford University’s Leverhulme Centre for Demographic Science. This can supplement test-and-trace technology by highlighting which regions and local areas are most likely to suffer disproportionate potential infections and hospital demand in case of future infection spikes.

Combining key data from multiple sources of known COVID-19 vulnerabilities, such as age, social deprivation, population density, ethnicity and hospital resources, the dashboard is accurate to a granular local level, enabling policymakers to target resources to the most at-risk areas. Given the changing nature of virus, it also allows users to adjust for changing infection rates and hospital resource levels. And, crucially, it can be an effective aide next to test-and-trace technology, to ensure health care preparedness and effective monitoring.

Professor Melinda Mills, author and Director of the Leverhulme Centre for Demographic Science says, ‘With additional outbreaks and second waves, thinking not only regionally, but at much smaller scale at the neighbourhood level will be the most effective approach to stifle and contain outbreaks, particularly when a lack of track and trace is in place.

As a case in point, the tool shows that Harrow in London would have been a local area with an exceptionally high age-related risk of hospitalisations due to COVID-19. The Northwick Park Hospital in Harrow was, in fact, also the first to call for a national emergency due to a lack of capacity early on in the pandemic.

Mark Verhagen, lead author of the study, says, ‘By using our online tool, policymakers would immediately have identified Harrow as a potential hotspot of hospital demand. Ensuring that local decision-makers have this type of fine-grained information available was a key goal of this study.’

According to the study published today in BMC Medicine, ‘As countries across the globe exit strict lockdown and enter the ‘new normal’ of co-existence with COVID-19, monitoring new infection hotspots will be crucial....We identify potential health care pressure points in England and Wales where expected hospitalization rates are disproportionately high and the per capita availability of hospital beds is relatively low.’

The article concludes, ‘As this pandemic continues to unfold across the world, we urgently need to consider how emerging sociodemographic risks such as social deprivation, ethnicity and population density structure spatial differences in COVID-19 severity and health care demand.’

Combining age, social deprivation, population density, and ethnic composition of multiple layers of data with hospital capacity, the researchers have produced online maps to identify the most at risk areas in England and Wales, which can be viewed at levels of the Administrative Region, Ceremonial County (CC), Clinical Commissioning Group (CCG) and Lower Layer Super Output Area (LSOA). Their research has shown areas such as the Isle of Wight and Lincolnshire to have some of the highest risk factors. These areas not only have older populations, but also higher levels of social deprivation.

According to the report, ‘We estimate specific pressure points where COVID-19 demand is likely to outstrip the baseline local supply. This again includes rural areas in Wales as well as the North-East and South-West of England where high expected hospitalization rates combine with relatively low bed capacity. Importantly, these areas are often more isolated and further away from alternative hospital services.’

Meanwhile, London and other inner city areas, from Birmingham to Manchester and Liverpool, are highlighted as areas of high population density and deprivation, which have potentially higher risk levels for additional outbreaks. But, although population-based hospitalisation risk tends to be lower in urban centres, some localities in cities may have higher levels of social deprivation and population density, which could counterbalance relatively low age-related risk levels. Furthermore, the online dashboard enables similar, fine-grained analysis for any region in England.

The Leverhulme Center for Demographic Science was launched in 2019 and brings together researchers from different disciplines to bring science into demography.