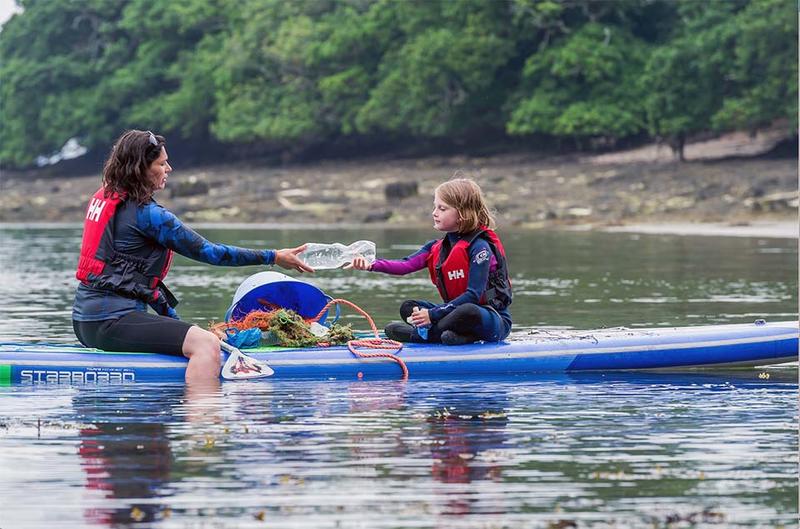 Environmental journalist and founder of the Plastic Clever Salcombe campaign Anna Turns (Hertford, 1998) and her six-year-old daughter Ella picked litter from their 14ft stand-up paddleboard throughout their 21.5-mile-long journey, up all the creeks of the Kingsbridge-Salcombe estuary. The tough paddle took two days and began on World Ocean’s Day, Friday 8th June at 8.00am, ending on South Sands beach the following day.

Engaging more than 150 people directly along the route via beach cleans and fellow paddleboarders on the water, and some local schools, Anna and Ella amassed 1,500 litres of rubbish over the two days including: 205 plastic bottles and lids, 20 plastic bags, 12 coffee cups, nine shoes, seven straws, six balls, five balloons, two crabbing buckets, one wooden ladder, one wheel, one My Little Pony, polystyrene and a lot of rope!

Anna noted, ‘Our two-day paddle and pick event connected so many people to the issue of plastic pollution on a local level and really shone a spotlight on where the hotspots for plastic pollution are within our beautiful estuary. Most often, litter accumulates out of sight away from the sandy beaches – under the tideline of trees in the bag for example, or amongst the layers of seaweed at West Charleton marsh.’

‘On a personal level it was challenging paddling with very windy conditions on both days but we did it and I am so proud of everyone who joined us and helped along the way.’ 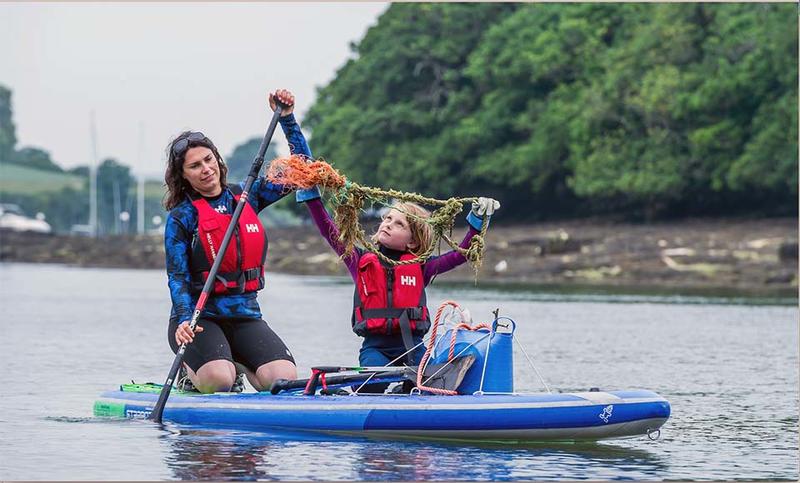 Looking back, she says, ‘I loved studying biological science at Oxford and first worked in wildlife TV production and then became a freelance journalist specialising in environmental issues. I love being able to draw on what I learnt about ecology at Oxford and communicate stories to a wider audience and I have seen first-hand how increased ocean literacy has such a positive knock-on effect in terms of conservation at a local, grassroots level. Plastic is just the tip of the iceberg and a tangible starting point - reconnecting more people to our environment will hopefully have so many more benefits in the future.’

‘We were so impressed by how enthusiastically the school children took part in the beach cleans and Kids Against Plastic is of course about so much more than just plastic pollution – it’s about engaging the younger generation with our environment and empowering them to make positive, lasting change in the community.’

Anna and Ella were joined by various changemakers along the way, including microplastics expert Imogen Napper from Plymouth University and Hannah Amor from the new plastics and sustainability team at Environment Agency SW. Also involved were the founders of Davy J swimwear and Riz Boardshorts, two companies working hard to create a more circular economy by reusing waste fishing nets and recycled plastic bottles to make clothing.

Plastic Clever Salcombe was set up by Anna and Ella Turns in August 2017 and currently has 22 businesses signed up to the scheme, all making huge efforts to eliminate ‘the big four’ polluters – plastic bags, drinks bottles, straws, coffee cups with lids.

The main sponsors of the paddle and pick challenge were The Plastic Company who produce outdoor furniture, decking and play equipment made from 100% recycled plastic bottles, and The Venus Company who avoid all unnecessary single-use plastic at their beach cafés.

Salcombe-Kingsbridge estuary is a Site of Special Scientific Interest, Area of Outstanding Natural Beauty, Local Nature Reserve and is also recognised as an eco-port by the European Sea Ports Organisation.