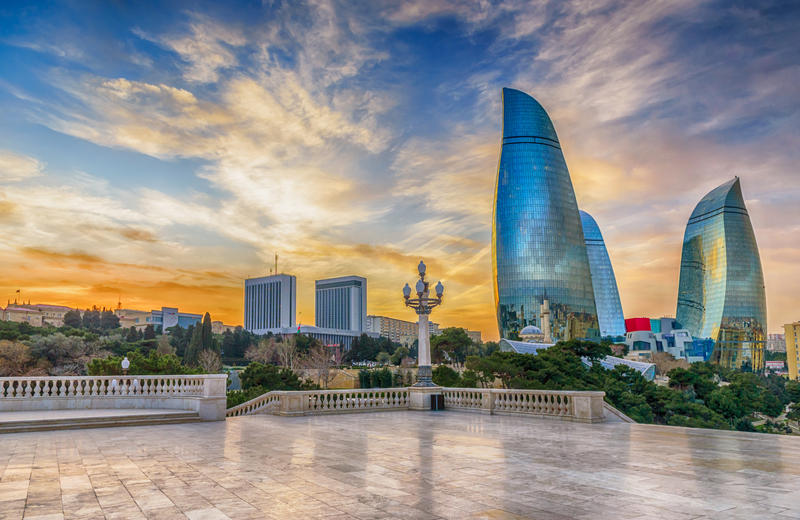 Security pass granted, Dr Shirvani (Univ, 2009) takes me right to the top floor of the European Bank of Reconstruction and Development, which is next to London’s Liverpool Street station at One Exchange Square, not a widely appreciated fact.

‘People assume that we must be in Washington DC – which makes sense because the World Bank is there, and that came out of the International Bank of Reconstruction and Development (IBRD) founded to rebuild Europe after World War Two.’ 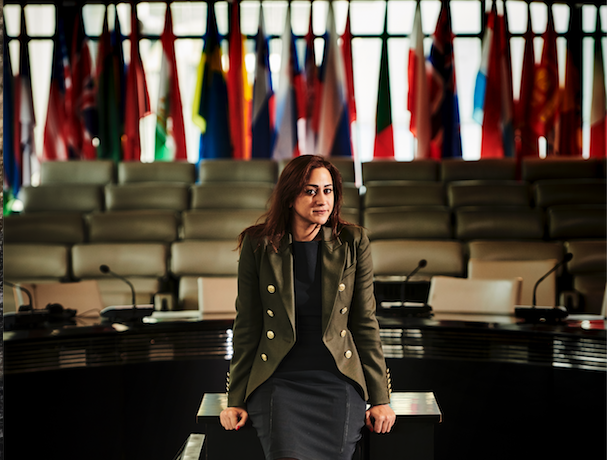 Tara is pictured in the boardroom of the European Bank of Reconstruction and Development, London, 2019

The European Bank of Reconstruction and Development (EBRD), where Tara has worked since 2018 after a five-year stint at the World Bank, arose instead on the crumbly ruins of the Berlin Wall and the USSR. If its forbear rebuilt Europe after the war, so the EBRD has rebuilt Eastern Europe and the former Soviet Union, from a London base.

Alighting from a very rapid lift, we enter a boardroom which exudes hushed power.

Resembling the UN Council with a huge oval of chairs, and desks equipped with translation headsets and microphones, the vast space is bounded by flags of 67-member states, creating a colourful pageantry.

Tara’s job title is ‘Principle Specialist, Sustainable Transport Infrastructure Policy and Project Preparation.’ ‘I’m a transport specialist with a climate change/digital technology brief’, she says, adding that in March she spoke at the TEDxCambridge main conference about the implications of block chain for the energy sector. She leads the ‘greening’ and ‘smarting’ of €1 billion a year in transport funds, a huge role at the age of 31.

Shirvani says that the bank recently adopted a ‘no coal, no caveats’ financing policy and has slashed lending to oil exploration and production projects. ‘This is a big step in the right direction and certainly brings into sharper relief the activities of Chinese and other development banks that finance huge numbers of coal and oil projects around the world.’

In her previous, not dissimilar role at the World Bank, Tara helped to deploy a rapid transit bus pilot in Dakar, Senegal, the first of its kind in Francophone West Africa. At the EBRD she’s spearheading a green cities initiative, which is also very attentive to the potential for new technology.

‘The EBRD is in pole-position to exploit the 4th industrial technology for its members. I view everything through a green lens but also through a smart innovation lens…’ 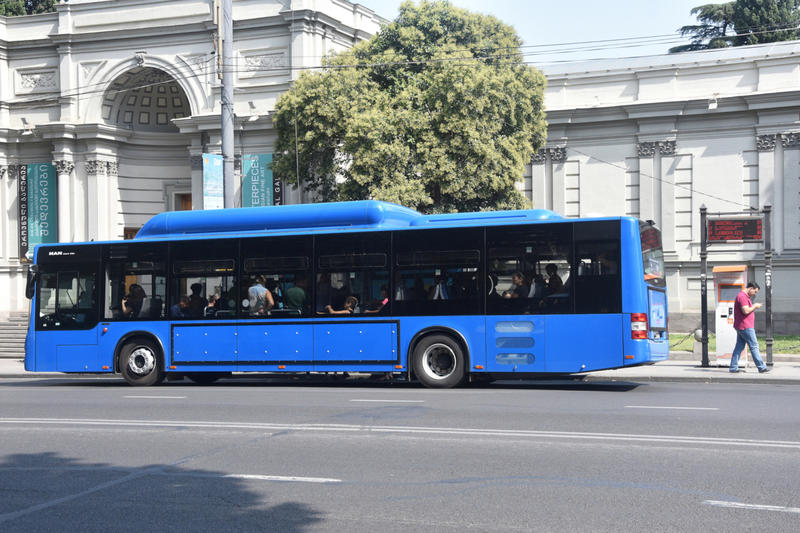 A bus converted to run on gas in Tbilisi, the fuel tank visible on the roof

In the bigger picture, Tara talks about greening the ‘Silk Road’, adding that she’s advising the Government of Azerbaijan on a digitalization strategy for the Middle Corridor, the key freight line of the New Silk Road project stretching from China all the way to the Black Sea and beyond. Alongside, ‘a major Green Ports project to integrate renewable energy into port operations in Baku… to achieve sustainable trade and transport between the Caspian Sea Ports of Azerbaijan, Kazakhstan and Turkmenistan and the wider region, including Europe.’

The daughter of Iranian parents, Tara lived in Vienna, Austria, until the age of 19, her father having moved there to pursue a PhD in forestry. This explains why Tara speaks not only Farsi and English, but German and French. Criss-cross that international background with a BSc in International Management including corporate finance, a Cambridge MPhil in Engineering and an Oxford DPhil in Inorganic Chemistry and Fuel Technology, and the resulting skillset is impressive. Tara also professes an abiding enthusiasm for politics, even though its harsh realities so often frustrate idealism and what she refers to as ‘the holistic view of things.’

In this, her Oxford mentor and supervisor, former Chief Science advisor to the British government and inaugural Director of Oxford’s Smith School of Enterprise and the Environment, Sir David King, was a perfect match and Tara describes him in 2019 as a dear friend and ‘incredible force of nature, still advising the government of Rwanda on COP climate strategy.’

The subject of her research at Oxford was whether algae could be grown in massive quantities to create biofuels to replace fossil fuels. The blunt answer is yes in theory, but not in practice unless oil were to rise steeply in price.

The context of her deep dive into algae was controversy around biofuels. ‘They had a very negative image in the media [in 2009]. If you take corn and maize to produce vehicle fuel, you get food price inflation. I remember protests in Mexico. We were looking at alternatives. Algae looked very promising because you don’t need as much land. We quantified it. Planting a land-space the size of Texas with algae ponds would replace the entire global transport demand for fossil fuels, vehicular, aviation, marine – everything.’ 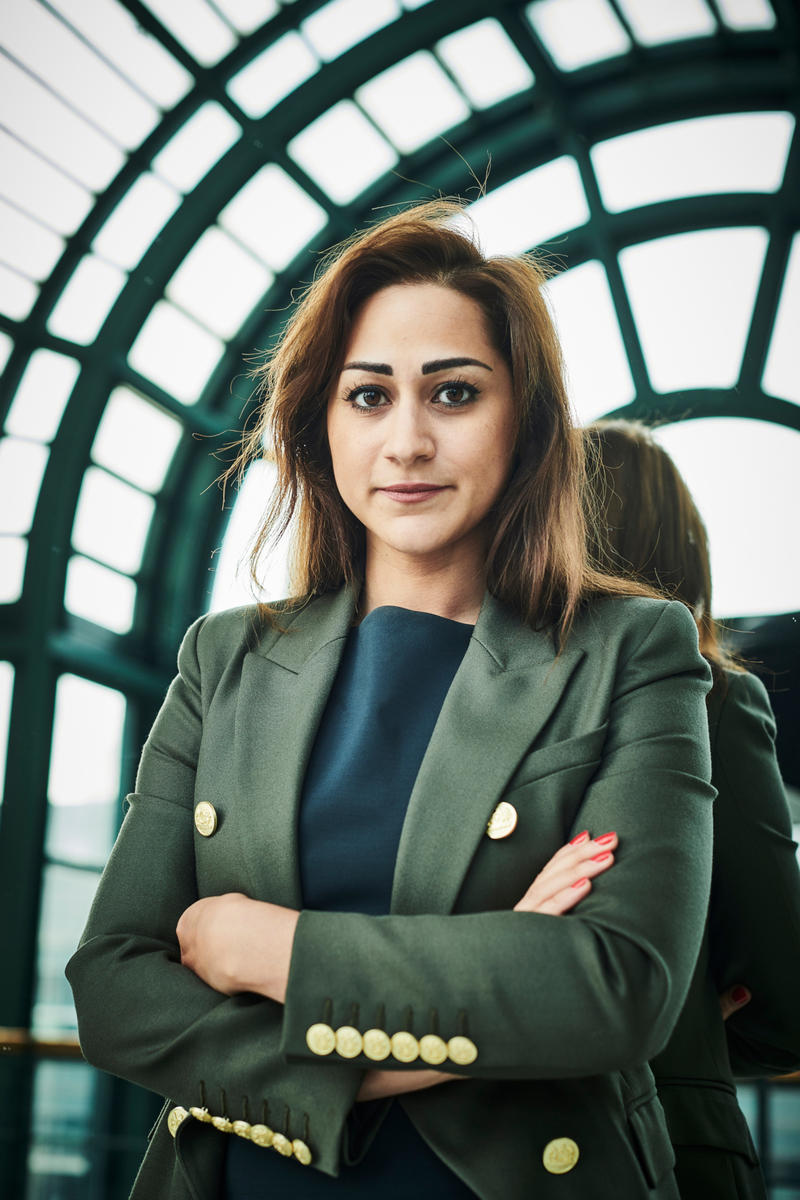 Tara at the European Bank of Reconstruction and Development

‘But,’ she continues, ‘it’s one thing to have a holistic view of things, say climate change. But the leap to policy implementation is something else. You have to understand the hard practicalities. Engineering; cost; application. That is critical, but also really valuable in the era of fake news and often blunt disregard for evidence.

In the case of algae, it hasn’t taken off because the transition from laboratory to commercial production hasn’t been straightforward or cost effective, quite apart from the abrupt change in US energy politics with the Trump Presidency.

Tara continues, ‘There’s no commercial production yet [of algae for fuel]. Only as part of a blend,’ she says, continuing, ‘…what I learned from my Oxford DPhil is that the devil is always in the detail.’

Having published several articles about Iranian gas production and the diplomacy of sanctions, she knows that energy is above all a political matter, not merely an environmental one.

Noting that she still has lots of family in Iran, and returns there frequently, one of her former inquiries (during the Obama Presidency) concerned whether Iranian gas supplies might have balanced Europe’s dependency on Russia. She’s also done policy work on how to reduce fuel subsidies within Iran, an urgent domestic matter given that Teheran, trapped between mountains, has some of the worst air quality in the world.

Sitting here as we are in the great empty boardroom while Joby sets up his lights for photos, I can sense Tara’s wide interest in policy, which at the end of the day is where any initiative for change has to find acceptance and execution. Is politics a possible future career path?

‘Well yes! A lot of my friends keep asking me about that. But the political climate in Austria is not compatible right now. The very right-wing government in place doesn’t fall within my values. It’s very difficult.’

What is her advice for women contemplating careers in the broad area of engineering and science? She says that she was raised to believe in gender equality and found it both at Oxford and internally at the World Bank. ‘However when you then start working in different countries with different cultural backgrounds, suddenly you realize that the concepts of ‘mansplaining’ and ‘maninterrupting’ are real…it is not easy, not comfortable, you have to learn to stand up for yourself, but to me this is the only path worth walking on.’

Tara remembers Oxford - and her Blue in waterpolo

Tara, what do you remember from your first day at Oxford?

‘I met Sir David at The Smith School. It was a bustling, bubbling world of academia but also a start-up atmosphere. I was shuffled in as a junior, to do research. He was very approachable and it was very natural, not a set event. We just had a coffee in the department. One of the best memories, on reflection, because itall began here!’

I still find it amusing, this Oxford-Cambridge rivalry. You’re brain-washed to think the other university is the inferior one, and there’s lots of bashing! I came to Oxford from Cambridge. When you convert to the other side you see the similarities and the spirit, and also some differences. Oxford is much bigger, and Cambridge felt like a Hogwart bubble.

Oxford felt like a proper city, with its own charm. Univ is on the High so close to the pulse, the student life. While the Oxford Tube was right there on my doorstep to whisk me away I never wanted to escape much, unlike at Cambridge. I was very happy to be in Oxford.

My time at Oxford was really my time to explore everything that could possibly cross my mind. The world was my oyster. Women’s boxing; water polo; college life. I never felt claustrophic. Everything was possible. It was brilliant.’

What was your typical day as a graduate student studying for a DPhil in inorganic chemistry?

7 until 8am was swim training, followed by porridge at Pret. Then I ran to the Department or the Smith School (I split my time between them). Lunch was typically back at Univ. Around 5pm, a talk or a lecture. Readers will relate. There was always something to do, someone to meet. The Smith School had an amazing speaker forum. Bill Clinton came. All the places were taken and it was over-subscribed, so I took a side staircase to stand in the gallery. Who was walking down it but Clinton himself! I caught him and we chatted for five minutes. That was one of the best coincidences I could ever have imagined.

What is the lasting value of a DPhil degree from Oxford, as you see it now, seven years later?

There was a direct application of knowledge to policy because of how the Smith School operated, so there was no question of being trapped in an ivory tower. But now I’m on the other side of that equation in my career, the real value of the degree was the academic rigour. I was able to co-author publications, cultivate a rigorous mindset and adopt research as a life habit rather than something you just do at college.

Something to change at Oxford?

I remain puzzled about the ‘Don’t walk on the grass’ business! There were occasions when this rule was broken! I also think that Oxford came late to the table for cultivating links with commerce and industry.

I understand that has changed, but perhaps it could still do more.

Are you still in touch with Oxford?

Yes, but I don’t go back there as much as I’d like to.

How did you become a blue in water polo?

Sport was very important to me at Oxford. Water polo is a contact sport and the typical injury is a broken nose from someone’s elbow. You’re in a pool and there is a net and a ball. You have to be a very good swimmer. It can get pretty physical. You get bathing suit pulling and nipple-twisting to make someone let go of the ball, not stuff that a casual watcher would observe on the surface! 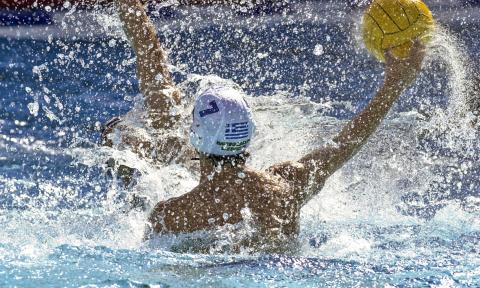 Waterpolo is much rougher than it appears

As for the Varsity match, I played defence and we played at home in the then-new Rosenblatt Swimming Pool on the Iffley Road. We completely lost! They had a crack squad of competitive players. Yet I was massively proud of my blue jacket. I wore it for a year and then lost it in the US – a cleaning lady at the World Bank threw it out. I could have replaced it but decided not to. I’ve seen alumni trying to squeeze into their blues jackets 40 years later. It doesn’t always work!