The Manchester group organises several events for members each year – typically these include an informal meal and a speaker from Oxford, a May Bank Holiday walk, a visit to a place of historic interest and a lecture in the autumn.

The following events are being planned for 2023:

Invitations to our events are sent out to our membership approximately 6 weeks before each event. To find out more about our events, please email the group's Secretary, giving your contact details, Alumni number, Oxford college, subject and year of matriculation, so that we can add you to our mailing list and keep you informed.

Autumn Lecture 2022: Achieving Net Zero – in the middle of an energy crisis 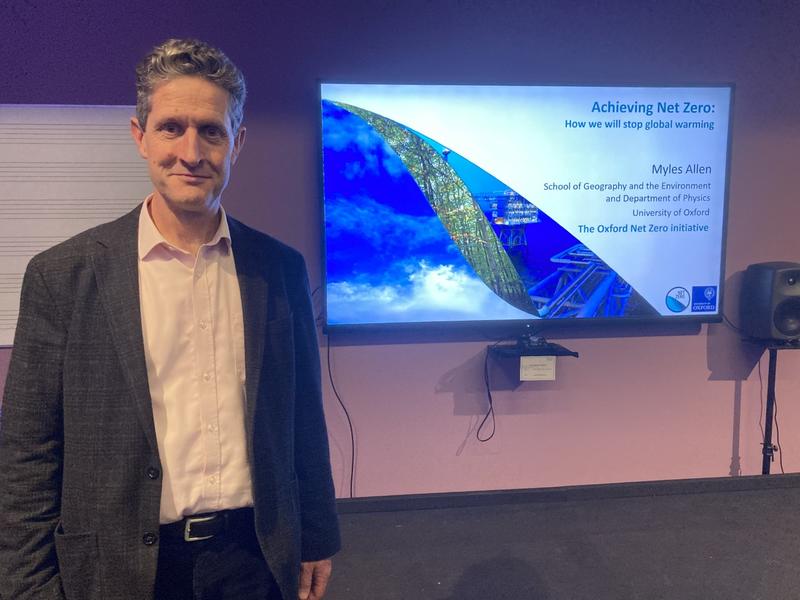 Our first face-to-face autumn lecture since 2019 was an eloquent plea by Professor Myles Allen for oil and gas companies to be forced to ensure that part of the carbon dioxide they produce will be captured and stored safely underground.

Prof Allen, Professor of Geosystem Science at Oxford and director of the Oxford Net Zero initiative, is one of the foremost authorities on climate change. He is credited with demonstrating, 15 years ago, the need for net zero carbon dioxide emissions to stop global warming. He argued, however, that present strategy based simply on trying to reduce emissions was failing. Carbon capture and storage could solve a quarter of the problem.

He urged groups of countries to introduce a ‘carbon takeback obligation’ whereby companies would be required to fund capture and storage of a proportion of the CO2 they produce, initially small but rising to 100% by 2050. In Britain’s case, storage is likely to be under the North Sea. Gas would be purified, compressed and reinjected deep under the rocks. An attempt to achieve this by amending an energy bill in 2015 failed after industry lobbying, but Prof Allen called for a new effort.

There would be a cost for the companies and consumers, but the increase was likely to be less than recent variations in energy prices. Prof Allen argued that regulation was likely to be more effective than campaigning for disinvestment in oil and gas companies.

For the first time since 2019 we were able to offer a face-to-face meeting for freshers about to go up to Oxford from Manchester schools and colleges. We were once again generously hosted by the law firm Eversheds Sutherland, and fifty freshers accepted the invitation. We provided a panel of six current undergraduates plus one very recent graduate, and they gave short presentations about different aspects of Oxford life, covering a range of academic, social and personal issues.

They were then available to answer questions in a plenary session and informally afterwards.

The meeting was ably chaired by Sarah Herdan. This is an important meeting for the students and is one of the largest Freshers’ Meetings held world-wide.

Many of the audience thanked us as they left and expressed a greater sense of confidence as they faced the new term.

Visit to Hawarden for Gladstone's Library and associated buildings - September 2022 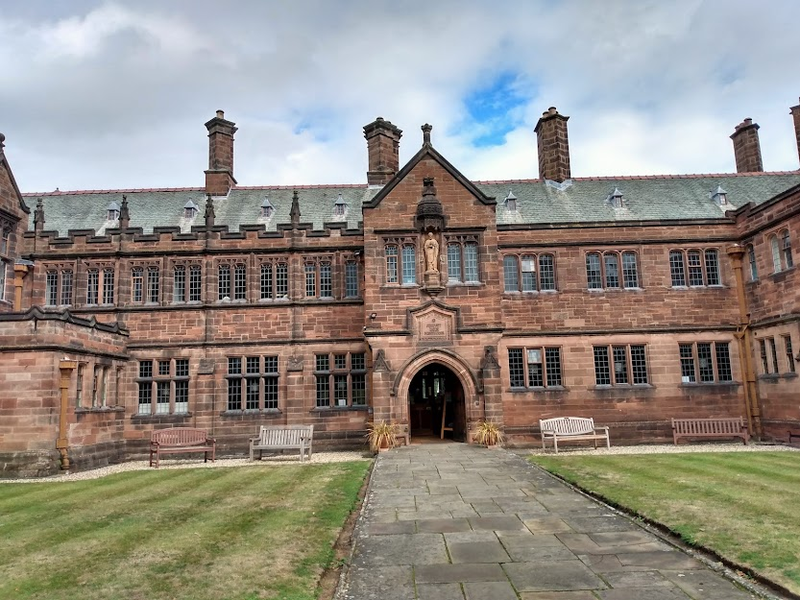 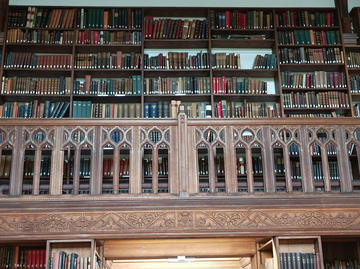 A morning spent in the company of William Ewart Gladstone and guided by the expertise and knowledge of OUS member Chris Wain. We examined documents including Gladstone and Catherine Glynne’s marriage certificate, Gladstone’s funeral order of service, a commemorative axe, and several books by the great man.

In St Deiniol’s Church we admired the enormous marble monument to William and Catherine, along with two windows by Burne Jones, and memorials to Gladstone’s daughter and niece. The Gladstone family plot was in a quiet corner of the churchyard.

The Gladstone Library was built in 1906, by John Douglas in red sandstone and replaced the original St Deiniol’s Library housed in a “tin tabernacle” which Gladstone had erected himself in the late 1880s to house 20,000 of his 32,000 books.

He left £50,000 in his will as a book fund to continue the work, and the library remains a residential one with 28 bedrooms and Gladstone’s own unique classification system.

A delicious lunch in the library café and a chance to chat rounded off an excellent outing.

Guided tour: Why does Manchester look like it does? July 2022

On a glorious summer day, a party of 34 enjoyed a fascinating tour by renowned guide Jonathan Schofield, focusing on the city centre’s architecture and planning and how it evolved.

We started on a bridge overlooking Manchester Cathedral and Chetham’s School Library; the bridge was once part of the approach to Exchange station, which had the world’s longest platform before closure in 1969. 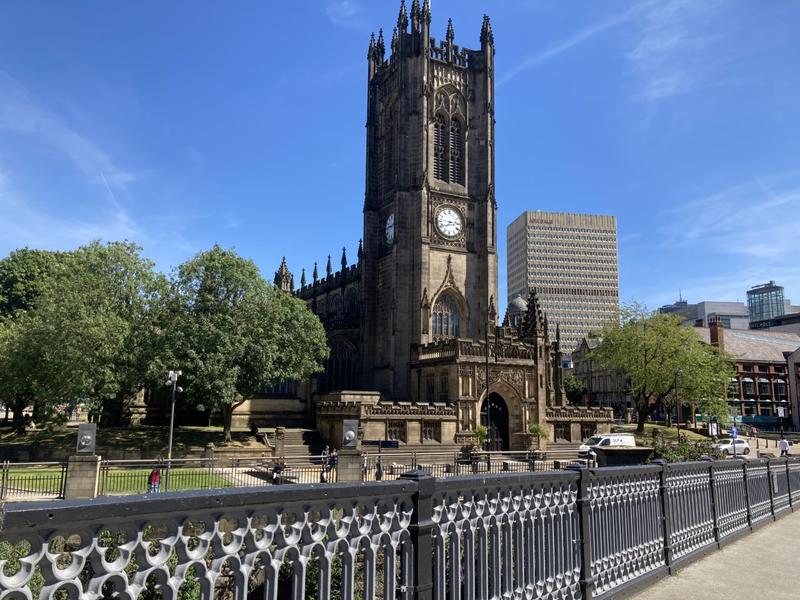 We looked across to the former Salford Cross, Salford’s historic centre, which lost its centrality when a viaduct was built across it, resulting from a property dispute.

Passing the Old Wellington, Sinclair’s Oyster Bar and Exchange Square, we entered the Royal Exchange, where Jonathan explained the role of cotton in shaping the look of Manchester. The need for so many warehouses meant that Manchester acquired a larger city centre area than, for example, Birmingham and Sheffield. 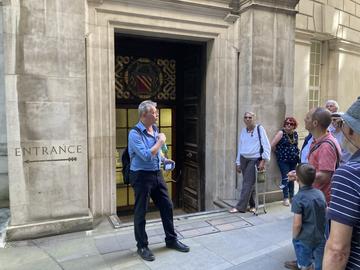 On to St Ann’s Square, where Jonathan explained the role of formidable Lady Ann Bland in creating the church and square, the city’s first bit of town planning.  Then we went via St Mary’s Catholic Church, a “hidden gem”, to the redesigned Lincoln Square, where the curious statue of Abraham Lincoln has been turned round.

Jonathan showed us what Albert Square will look like once Town Hall refurbishment has finished and ended beside Central Library, the UK’s busiest library up to the pandemic.

An explanation about Manchester Central Library

It was a tour packed with incidental detail, enjoyed by all.

We were able to return to our traditional May Bank Holiday walk this year with a fascinating six-and-a-half-mile trip involving industrial heritage in the High Peak of Derbyshire, led by treasurer Chris Hirst. The weather stayed fine.

A party of 16 started at Bugsworth Basin, the head of navigation of the Peak Forest Canal, which was the largest and busiest inland port on Britain’s narrow canal system and is the only one to have survived intact. The canal was built by Benjamin Outram to transport limestone and gritstone from quarries in Derbyshire. It has been restored by volunteers, starting in 1968 and culminating in reopening the canal and basins to navigation in 2005.

The first part was along the canal and the River Goyt to Whaley Bridge, whose population almost trebled during the Industrial Revolution, in which cotton mills become the dominant industry. After negotiating a collapsing stone stile, we climbed 550 ft to the summit of Eccles Pike, from where there was a fine 360-degree panoramic view over the Pennines. The name “pike” means pointed hill, though it is unknown where the “Eccles” comes from.

Then it was downhill for lunch at the Navigation Inn beside the basin. It became an inn more than 200 years ago and still retains its character. It was once owned by Pat Phoenix, who played Elsie Tanner in Coronation Street. Thanks to Chris for such a fascinating walk in a beautiful part of the world.

There was a good turn-out for our first indoor face-to-face event since the pandemic forced a move to digital meetings in March 2020. Our speaker was Brian Groom, author of the forthcoming book ‘Northerners, A History - From the Ice Age to the Present Day’. Brian’s wide experience in various editorial chairs of national newspapers proved an ideal background for this sweeping view of history. It dated back to a dinosaur (nicknamed Alan after its discoverer) from 176 million years ago, found in a Whitby cliff face. On a whistle-stop tour of northern history, we met outstanding figures from Cartimandua, Queen of the Brigantes to Emmeline Pankhurst, Manchester-born and now commemorated by a statue in St. Peter’s Square. The great importance of northern industrial developments in the 19th century was also discussed, and the impact of various political movements in recent times. A lively discussion followed.

The obvious question of ‘Who is a northerner?’ had a simple answer: ‘A northerner is someone who thinks they are a northerner’ and a show of hands proved that this was true of most of the audience.

When restrictions prevented our usual programme of events, we turned to on-line meetings to fill the gap in our activities until our members could meet face-to-face once more. Thanks to some very interesting offers from members of OUS Manchester, we were able to arrange a series of four meetings from March to June:

If you live in or near Greater Manchester and wish to be kept in touch with OUS Manchester group events, please email the group's Secretary and ask to be added to the contact list.