A RAY OF CLIMATE HOPE? 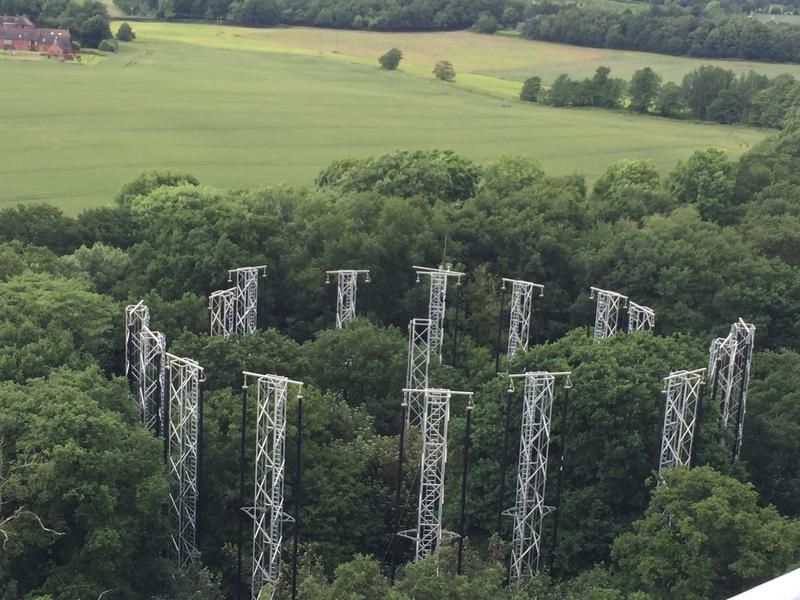 A RAY OF CLIMATE HOPE?

Trees are shaping up as the best ‘carbon capture and storage’ opportunity, suggest preliminary results from an immensely important ongoing arboreal experiment.

Professor Rob Mackenzie of the University of Birmingham updated a packed audience on a decade-long climate experiment being conducted on a mature oak forest, to see whether it can absorb more CO2 when subjected to much higher levels than are currently present in the world’s atmosphere.

Called BIFoR-FACE, which stands for Birmingham Institute of Forest Research Free-Air Carbon Enrichment, the idea is to blow a carbon dioxide rich mixture of air into the forest at set locations over ten years, and observe in enormous detail what happens compared to control areas where ordinary air is blown in the same manner.

Professor MacKenzie says that the experiment may lift the curtain on what we might expect by 2050 when even with vigorous carbon reduction efforts by the world’s governments, by no means certain, we may be facing a world with 100 parts per million more CO2 in the atmosphere than today’s c420 ppm, already 100 ppm higher than in 1958 when it stood at 320ppm.

BIFoR-FACE is an enormous undertaking, with a budget over £50 million, six remarkable ‘ring’ towers that have been built up into mature oak canopy in Staffordshire, and a combined staff of over 100 researchers.

Begun in 2017, Professor Mackenzie updated the audience on the halfway-mark data now that the experiment has been underway for five of the ten years.

The central finding is that photosynthesis rose 23% in the carbon-enriched forest, over the normal forest. Leaves were observed to get approximately 20% thicker while nitrogen levels rose 10%.

Dendrochronology, or the science of measuring tree growth, suggests 28.5% more tree growth for the carbon enriched trees relative to the control trees.

Just as interesting is that the researchers found enhanced fine root stock at one metre depth below the ground, and that the oak roots, which ‘leak’ food into the soil to secure microbe-borne nutrients in return, became more active.

Professor MacKenzie emphasised that these are provisional results, furthermore emphasising the cryptocurrency-like secrets of nutrient exchanges and other mechanisms, that are ‘unseen but are strongly felt.’

‘Some atmospheric CO2 ends up in soil organic matter through this nutrient exchange process, and puts it away for a very long time. But the process is not fully understood.’

The big picture, he reminded the audience, is that of all the CO2 produced in the world, approximately 26% is thought to be absorbed by the oceans and 30% by the land, while 44% goes into the atmosphere.

But even these big picture estimates miss the intricate biological mechanisms that are work behind the scenes, the interactions between nutrients, soil, water and air that are facilitated by tree growth and which ultimately anchor carbon in the wood or in the soil beneath.

Professor MacKenzie reminded his audience that while we are right to worry about the loss of tropical rainforest, temperate forest absorbs in the region of three billion tonnes of CO2 a year, or the combined emissions from the whole of the EU plus the UK.

Unfortunately, he noted, this total is also roughly the additional emissions produced by annual deforestation at current rates. It is a crisis for which there is no easy solution except perhaps extensive planting of new forest, whether as replacement or as addition.

He also added some caveats to the provisional results.

One caveat is that what is called Net Primary Productivity (NPP) is not the same as Net Ecosystem Productivity (NEP). The first measures all tree growth, but the second subtracts the losses from leaf litter that will rot and re-release its carbon, and other losses such as the consumption of parts of the tree by animal browsing or fungal inroad – broadly what is referred to simply as ‘eating.’

Another caveat is that inter-annual variability of climatic conditions has already turned out to be starkly differentiated, 2017-22, never mind the future.

The heatwave of 2022 was shown on a graph that showed successively weird and varying patterns of temperature, flood/drought and tree growth over the past five years.

Luckily mature oak trees have very deep roots and are well established —hundreds of years old already for many of the trees in the experiment— but an obvious concern might be how younger trees will react to extreme weather going forwards. They certainly don’t have the same resilience to drought, for example.

Then there is a much broader worry about biotic stressors such as mildew, disease and pests, already a huge problem expected to get worse.

Perhaps the ultimate caveat is how long the carbon is locked up for by a natural process. Peat bogs have provided a fantastic example of how nature can lock up carbon for millennia, but ultimately a tree matures and either dies and cedes its carbon back into the atmosphere, or is somehow ‘used’ (within the frame of a building it will be locked up for potentially hundreds of years – Oxford has good examples such as the Duke Humfrey's Library stalls).

Professor MacKenzie notes how carbon dioxide does have to be locked up for millennia to be seriously climate relevant, but also that anything right now would be gratefully accepted, even on a 50-100 year horizon.

He added that well managed forest is overwhelmingly more likely to be productive as a carbon sequestration mechanism than just letting nature run wild, but that this might form a ‘part two’ of the BIFoR-FACE experiment over a second decade, if the funding can be found.

Despite these concerns the results tentatively suggest that a carbon rich atmosphere will stimulate enhanced growth, all things being equal (the ultimate caveat!).

His study also sits well within the known range of several other Free-Air Carbon Enrichment studies, which have shown broadly similar results.

To draw a parallel with the well-known Oxford University wood at Wytham, for which the growth data already exists, Professor MacKenzie estimates that his carbon-enriched oaks produced 17 tonnes of biomass per hectare per year, versus 15 tonnes for Wytham, a 19% uplift.

‘Jimmy’ James, the man in whose name the lecture is given annually, was a popular Bursar for Corpus Christi College in 1950, and a legendary land agent for the Oxford University estate.

He also wrote a series of well-regarded books on forestry, notably A History of English Forestry (1981), and was President of the Royal Forestry Society (RFS) (1962-4).

To this day it is the Royal Forestry Society who host the lecture, typically in Oxford each year.