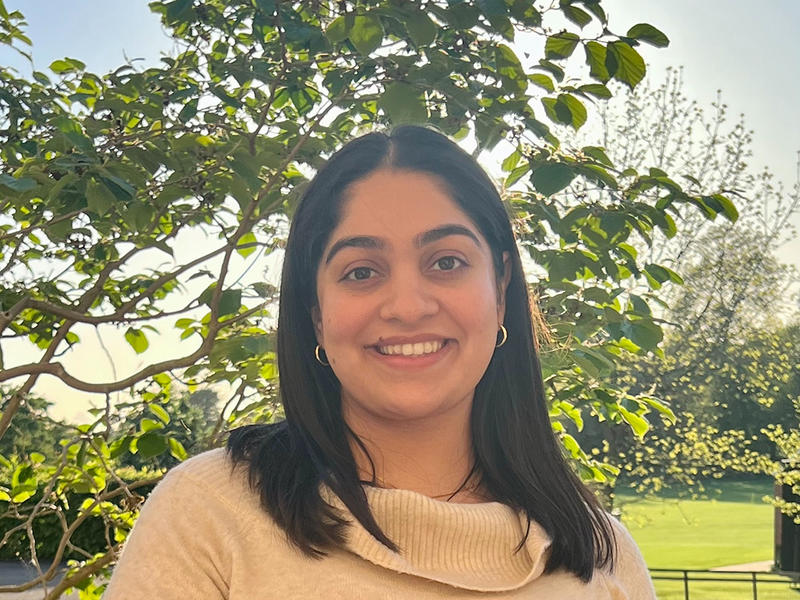 A native of Southend-on Sea, Essex, Zaynab Ahmed is a Crankstart Scholar, meaning that she qualifies for a bursary to assist with the cost of being an undergraduate. One of the silver linings is additional help with career starts, including a mentorship programme.

On the brink of taking her finals in law, Zaynab takes a precious block of time away from revision to reflect on her journey at Oxford and what she’s looking ahead to.

Matriculating in October 2019 was completely normal, she remembers. What wasn’t normal was how the second term ended in national lockdown and how subsequently a significant chunk of Zaynab’s time ‘at Oxford’ was actually time spent online.

‘We were the most impacted year group of all,’ she reminds me, noting how her Honour Moderations would have taken place in 9th Week of Hilary Term, 2020, and their postponement to the second week of Trinity had no precedent that anyone could recall.

Despite all this the Careers Centre rolled into great action, she notes, offering all sorts of ideas for career-related help. In the end she did two internships as well as a mentorship.

The internships were with Oxford Citizen Advice Bureau (CAB), albeit behind a screen but none the less ‘real’ because of it, and a brilliantly down to earth way of engaging with practical aspects of the law.

The second was with a tech start-up called Nation better, ‘a digi platform to help applicants for immigration into the UK, streamlining a very complex process.’

The mentorship was with a barrister, Elisabeth Grace, also an alumna from St Hilda’s and now at Outer Temple as part of a mixed commercial and public law chambers.

Again, it was online but Zaynab hopes now to have a further ‘in-person’ component to make up for what was previously lost.

Zaynab speaks very highly of Elisabeth, who completed a Mst course at St Hilda’s in Japanese Modern Literature having herself grown up in Wales.

‘I noticed that she was a first-rate linguist; the law is ultimately about words and language and how they get interpreted.’

Grace also offered much advice about ‘different strategies to prepare applications,’ which ‘gave me the confidence to apply for things, also how to prepare for Finals.’

Zaynab showed early interest in the Bar but notes the lack of true diversity there still (‘the statistics remain off-putting’.)

Instead what she did in 2021 was to apply for Legal Practitioner Courses, the next stage to becoming a practising solicitor in the UK.

She was offered a place in December on an LPC course within a training contract run by law firm Allen and Overy, and accepted it.

‘The thing about Elisabeth is that she was very confident, very outgoing, but we shared ‘non-standard’ backgrounds, she being Welsh, me a second generation immigrant from Pakistan, with a working class background from Southend. So it gave me a lot of confidence to talk to her.’

Zaynab’s legal interests are now forming around the intersection of commercial and family law, and her French and Spanish studies at school are complemented by a good reading knowledge of Arabic that she is set to expand through travel to the Middle East between now and taking up her LPC in January 2023.

If she has one line of advice to anyone looking at the law for a career, and based on getting to know a successful barrister, it’s the importance of having ‘lots of experience not necessarily legal.’

In other words, stay broad, be super interested in language, don’t misperceive the benefits of an apparently unrelated internship if it comes your way, and see your ‘a-typical background’ as an asset rather than a weakness – because it is.

Her finals will be ‘open book from home’ rather than in the Examination Schools, even in 2022, a specific regret ‘because I am a stickler for tradition.’ But despite this constraint, or perhaps because of it, she is raring to go on a career that will start with an accelerated training programme with Allen and Overy and no doubt go from there – it’s not too hard to imagine Zaynab in turn mentoring future students who will then have slightly less of a mountain to climb in respect of the English legal profession.

That’s what is so good about mentorship schemes that smash barriers and build confidence.

Unveiled in 2020, Oxford University’s Crankstart Scholarship programme (formerly Moritz-Heyman) is designed to help UK resident students, with a household income of less than £27,500, to study at the University.  A bursary of up to £5,000 is supplemented by other opportunities such as volunteering and summer internships.