COMPETING IDENTITIES OF THE PAST AND FUTURE IN RUSSIA AND UKRAINE 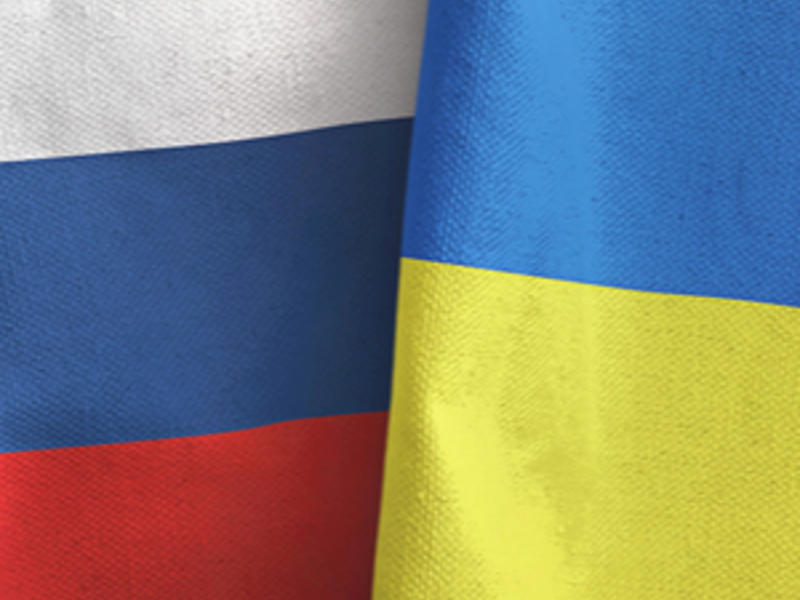 COMPETING IDENTITIES OF THE PAST AND FUTURE IN RUSSIA AND UKRAINE

Popular attitudes in Russia and Ukraine show significant differences towards national identities and relations with the outside world. Russia's invasion of Ukraine will deepen this divide

Professors Paul Chaisty and Stephen Whitefield have been analysing and researching political identity and public opinion in Russia and Ukraine over the last 25 years. They write:

Wars are often critical junctures in the politics and political cultures of countries.  We write as Kyiv is under siege with no clarity as to how the Russian invasion and Ukrainian resistance will develop.  It is clear, however, that the conflict is strongly shaped in the minds of protagonists and participants by competing concepts of identity as well as of interests.

Understanding how citizens of Russia and Ukraine view themselves and their country’s connections to one another and the rest of the world is, therefore, of importance for our own perspective on events.  And, while the views of citizens matter more in democracies  such as Ukraine’s than in authoritarian systems such as Russia’s, it is notable that even Vladimir Putin frames his defence of Russian aggression in identity terms.

In what ways, then, does the research we have been conducting into public opinion in Russia and Ukraine over the post-Soviet period help us in understanding the politics of identity in both states? The answers are relatively clear, as well as dynamic, but they also point to the complexities of identity politics in these countries.

It is useful to try to capture these politics by considering one very common explanation for Putin’s actions: it is motivated by a desire to re-establish the Soviet Union. We have asked Russian and Ukrainian citizens to consider their Soviet identity since the early 1990s.

In Russia, the results in Figure 1 show a steady decline in Soviet identification, although in our latest survey in September 2021 a near majority of Russian citizens still express that identity.  Might this uptick be a cause or result – it is hard to establish which – of Putin’s revanchism?  We strongly suspect not, since our analysis of those who express Soviet identities are no more likely to be Putin supporters than his opponents. 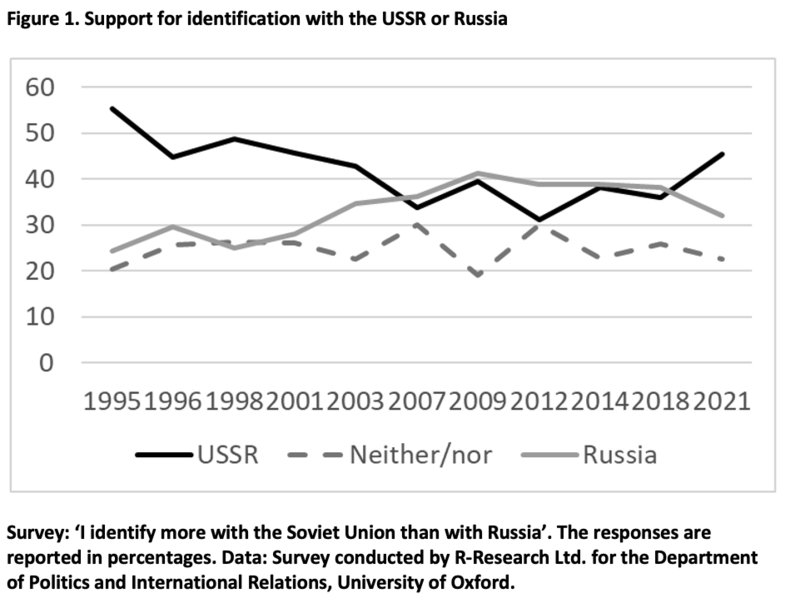 Clear differences are also evident on the question of Ukraine’s relations with the West. This question is divisive and deep seated in Ukrainian politics - provoking the Maidan Revolution of 2014. And Volodymyr Zelensky’s success in 2019 was achieved, in part, by taking a centrist stance on this question. Nonetheless, our evidence points to a clear majority of Ukrainians who have consistently supported integration with the EU and the West over time, as Figure 2 shows.  Even in the East and South of the country, the clear plurality of the respondents taking a view on this question in our most recent survey in 2019 favoured EU integration. 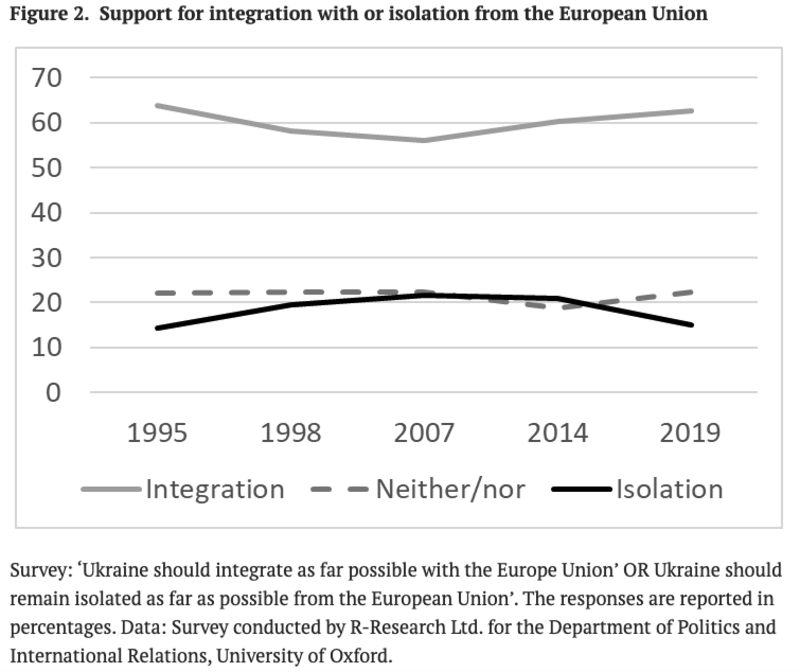 The pattern for Russia is markedly different when the same question is asked, as Figure 3 shows. Support for Western integration has declined overall since 1995 and opposition has grown somewhat. However, it is notable that in 2021, Russians were more or less evenly divided on the question among those who took a view.  The largest group of Russians are now not sure on what side of this divide they stand. 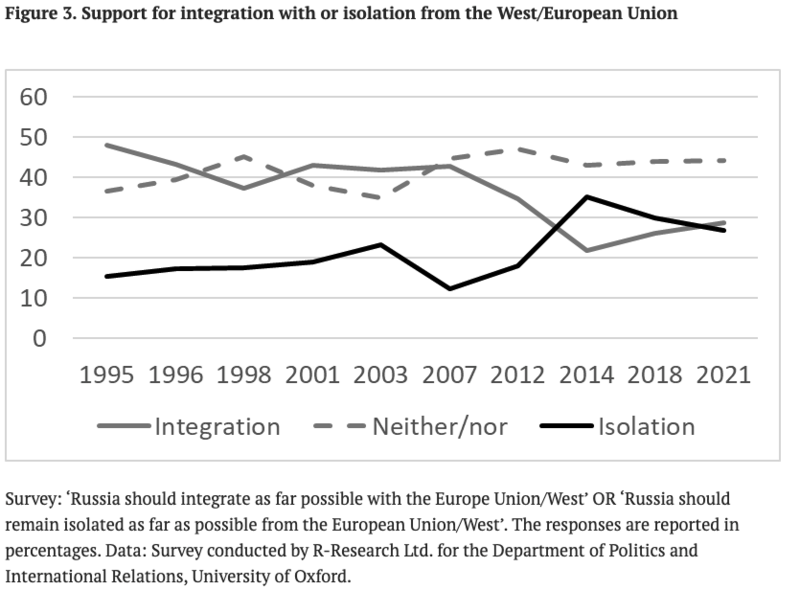 What might be the implications of these findings for our understanding of the current conflict?

First, for Ukraine.  Any occupation of the country, under the auspices of a revanchist Soviet or Russian imperial order, will fail to win substantial public support, even in those parts of the country that are most sympathetic.  Following the experience of 2014, opposition to Russia will grow.  Ukraine’s democratic path and Russian occupation or suzerainty are fundamentally incompatible.

Second, for Russia, the findings are more complex. Russia is an electoral authoritarian regime, not a democracy. However, our research for a forthcoming book gives us reason to argue that the Putin regime has been successful in consolidating itself in public opinion.  A large number of Russians approve of its electoral authoritarianism.

Interestingly, the divide in Russian public opinion is at its widest on the question of Russia versus the Soviet Union.  However, the political implications of that are at best ambiguous. There is little reason to believe that, whichever side one takes in Russia on that question will lead to opposition to the invasion. More important might be stances on integration with the West. But, we find it unlikely that the plurality of Russians currently on the fence on this matter will be swung towards the West in the immediate future.  And, as we have noted in other research, the opposition to Putin may come from even harder nationalists than from Westernising liberals.

Paul Chaisty is Professor of Russian and East European politics, Department of Politics and International Relations and School of Global and Area Studies.

Stephen Whitefield is Rhodes Pelczynski Fellow in Politics and Professor of Comparative, Russian and East European politics, Department of Politics and International Relations