COPPARD A LOAD OF THIS 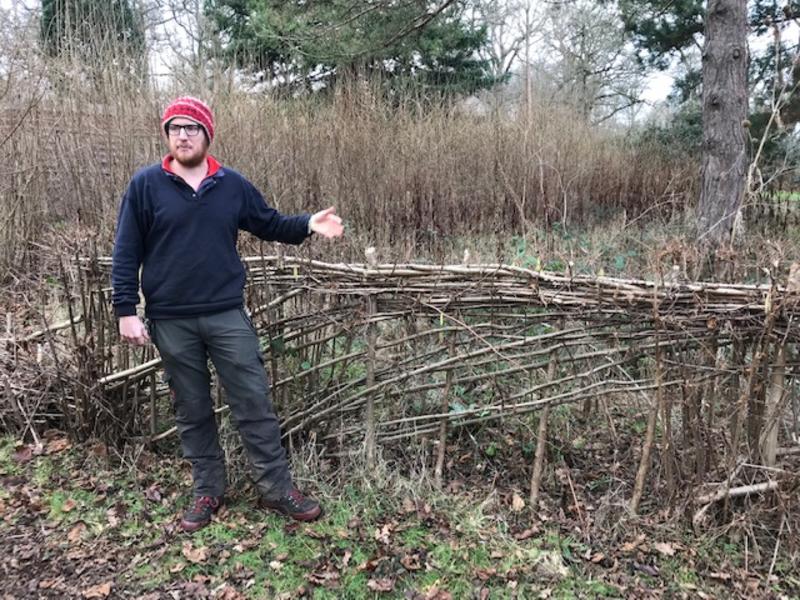 COPPARD A LOAD OF THIS

Harcourt Arboretum hosted a coppicing course in late January, part of a program of alumni and public-facing outdoor adventures

Coppicing is a winter activity because it involves cutting back coppice ‘stools’ to their base when the tree is dormant, to stimulate new growth in the spring that lies ahead.

Favoured species include hazel, sweet chestnut and silver birch, but there are other species that coppice well and willow is the key species in other parts of the UK such as the Somerset Levels, where it is harvested for basket weaving.

Head Arborist Guy Horwood (pictured, above) explained to a dozen participants that coppicing was the enduring historic practice of the British countryside and the way the early industrial revolution was fuelled, on account of the very high temperatures attained in a charcoal burner, allowing pure charcoal to be made and thence to melt metal in a forge.

Historically, a coppice worker would only cut a given portion or ‘coup’ each year, allowing the others to grow up until it was their turn in a completely sustainable, infinite rotation typically of 7-10 years.

There remain surviving remnants of older coppice dotted across the UK, but many have been neglected and allowed to grow out. The heartland remains Surrey, Sussex and Hampshire, where there are still some worked coppice woods with magnificent root systems under the earth surface, ready to throw up multi-stemmed growth at the next cut. 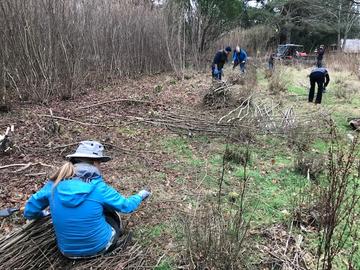 Guy explained that the coppice at Harcourt is very young by these standards, having been planted only in the early 2000s, so not all of it has attained the straight and tall growth that is the hall mark of a really ancient coppice.

He also says that deer and squirrel damage is a significant problem, giving new meaning to the phrase ‘nipped in the bud.’

One solution has been to revive a hybrid practice called ‘copparding’, a conjugate of ‘coppice’ and ‘pollard’. This is where you coppice at head height so that all the regrowth is out of the reach of deer, a compromise that now defines the sweet chestnuts on the estate.

The effect of cutting a stool back almost to ground level, still the preferred practice particularly for hazel, stimulates multi-stem growth and slender, straight shoots ideal for either stakes or binders, the two core materials for hedge laying, another lost art that has been restored at Harcourt Arboretum.

Guy explained that the role of the University’s Arboretum has changed over time. Originally designed to show off the status of the owner Archbishop Vernon Harcourt in the early 19th Century, Harcourt is renowned for its rhododendrons and Indian peacocks which continue to strut around, delighting visitors.

The University acquired the site in 1947, and it became part of the Botanic Garden in 1963, more recently adding land to a total of 130 acres. 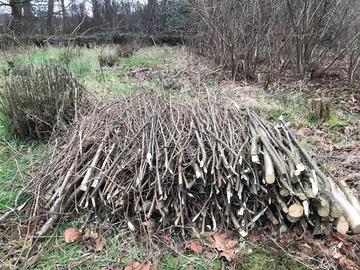 This expansion has allowed the core function of the arboretum to continue but with a conservation and biodiversity recovery remit, growing tree species that may be threatened in their native habitats and reviving arboricultural practices in danger of being forgotten.

The Arboretum today features an expansive wildflower meadow, a large replanting of native British woodland and then several acres of coppice that return materials both to the immediate site, the Botanic Garden and several colleges including Worcester and Trinity, both of whose gardeners were due to visit and coppice in February.

These wider practices are pursued by weekly volunteers and have helped in a wider revival of traditional countryside skills such as hedgelaying.

Another practice re-introduced to the woods is deliberate foraging by various livestock, with Oxford Sandy and Black piglets rootling around silver birch coppice within a protective enclosure, on the day of the course (pictured).

Such activity disrupts invasive species and sets various seeds in the soil, helping the coppice stools to thrive. 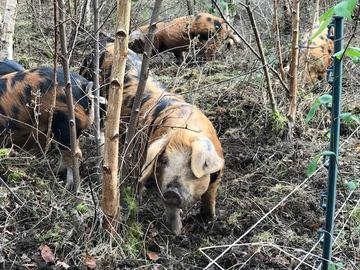 Addressing the question of whether it is right to cut trees down when climate change demands more, Guy explained that the whole point of coppicing is not to remove the tree but to stimulate more vigorous growth.

There is also a biodiversity case for coppice.

When you cut a small section, a coup, the light floods back in and long dormant seeds germinate again.

There are also many insect, mammal and bird species that particularly thrive in a coppice, including most fritillaries and skippers, dormice, voles and shrews, warblers, robin, wren, tree pipit and the now rare nightingale and woodcock.

In her book Coppicing and Coppice Crafts Rebecca Oaks says, ‘The biodiversity of a coppice woodland in rotation can be awe-inspiring. It is unlikely that there will be many rarities, but what coppices lack in rare species, they often make up for in sheer weight of biomass.’

In other words the idea that complete non-intervention is best for nature is not necessarily true, particularly if the valuable products of a managed woodland substitute plastics drawn from fossil fuel.

The Oxford Botanic Garden and Arboretum is part of Oxford University’s Gardens, Libraries and Museums.  Alumni benefit from a special admission fee of £5 with a My Oxford Card.

Discover more practical courses run by The Botanic Garden and Arboretum, open to all.

For more information about coppicing there is a National Coppicing Federation: www.ncfed.org.uk