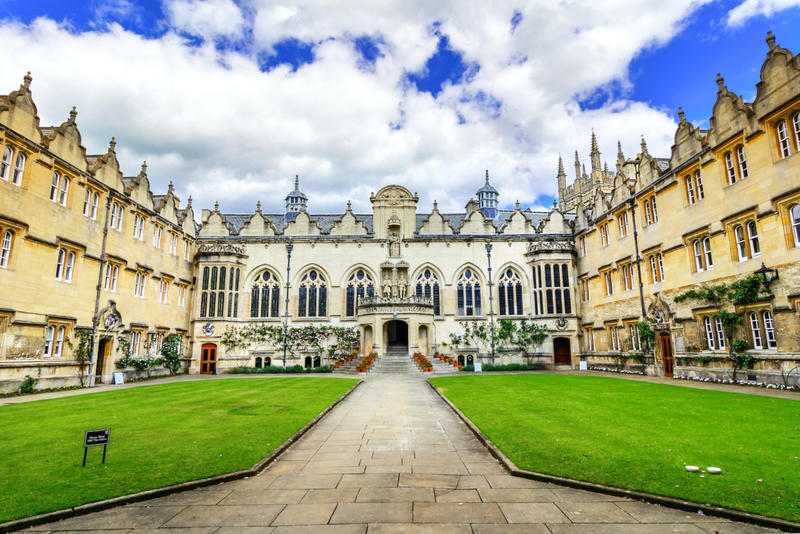 John Heilbron has published a remarkable new book, The Ghost of Galileo. It is rich with Oxford actors and incident amidst the tumult of the English Civil War. 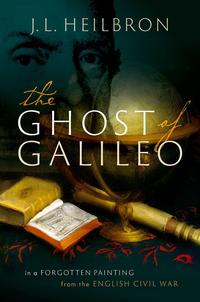 John Heilbron has published a remarkable new book, The Ghost of Galileo. Years in the making, it is rich with Oxford settings and incident amidst the tumult of the English Civil War.

The book focuses on a painting from c.1643 that John stumbled across at Kingston Lacy around ten years ago.

By the artist Francis Cleyn, it depicts the student John Bankes (Oriel, 1643), and his tutor, Dr Maurice Williams (St John's, 1616). Since Williams was a fellow of Oriel College in 1643 (pictured, above), Cleyn may have made his portrait in the college, in which both his sitters then resided.

Relatively little is known about the painter and his two sitters, but astronomy was already popular in England.

Cleyn had studied art in Italy, Williams had studied medicine in Padua, and evidently the young Bankes had an interest in astronomy symbolised by the telescope placed in front of him. They would have known about Galileo.

In a coded appeal to the cognoscenti, Cleyn includes an impressionistic rendering of an illustrated title page without the title. Prepared viewers would have recognized it as Galileo's.

Galileo’s Dialogue on the two chief world systems (1632) was, as John puts it, his ‘famous defence of Copernican cosmology that earned its author the attention of the Inquisition, perpetual detention in his small villa outside Florence, and the reputation of a martyr to freedom of expression.’

The presence of the book, argues Professor Heilbron, is no accident, and connects Oxford to the scientific revolution in unanticipated ways.

QUAD asked John about the project:

How did this project begin?

As I walked by the melancholy painting, my eye was caught by a white splotch that I recognised as the frontipiece to Galileo's Dialogue. I recognized it because I had just published a biography of Galileo (OUP, 2010). This raised two puzzles: who in England in 1643 would have recognised the Dialogue in Cleyn's impressionistic rendering of its frontispiece; and what did its presence signify in a portrait? 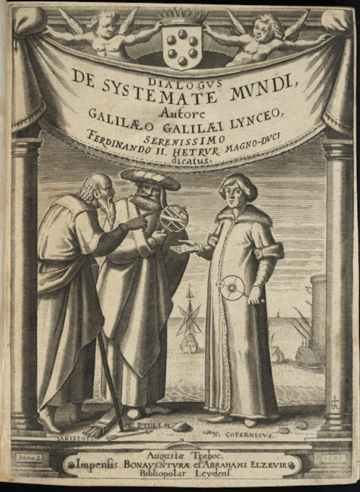 Give us the simple coordinates about sympathies…
The father of the depicted student, Sir John Bankes, was the Chief Justice of Common Pleas. He had advised the King not to pursue war but had not prevailed. Around the time of the painting, the King was demanding that colleges hand up their silver plate to fund a ruinous conflict. There is an air of resignation but also of sorrow – at the baleful consequence of religious intolerance but perhaps also hope, via Galileo, who could symbolize progress in understanding the physical world and, through his associations with the Republic of Venice, in the mutual toleration of Christian sects.

Of course, there is the great matter of Galileo’s support for Copernicus’ heliocentrist world system, in which the earth moves around the sun and not vice versa, defying the church prohibition against teaching it. Because he was dragged in front of the Inquisition as a result, there is also a sense of martyrdom on behalf of freedom of expression. The exemplar of a "good" Catholic is also here -- civilized, cultured, and anti-Roman…To identify any of these aspects you would have had to recognize that the splotch was a reference to Galileo. That led me to a very pleasant romp through the literature of the time: plays, poems, masques, sermons...in fact there were many ways to hear about Galileo during this period in England.

…and relate to the English Civil War?

Many actors were Oxford men: the two subjects of the immediate portrait, Bankes’ father Sir John Bankes, Archbishop Laud, physicians expert in melancholy such as the famous Robert Burton, astronomers and mathematicians, among them the Savilian professors, who popularized Galileo’s cosmology in England; ministers, playwrights and almanac makers...

The broader historical fact is that the King’s court had billeted in Oxford in early 1643. The city was overflowing with soldiers who may have caused a typhus outbreak that summer.

Why is the young student apparently so gloomy?

Melancholy was the fashionable disease of the time, especially among the studious, and among them especially those with a mathematical bent, like astronomers; to which can be added (for young John Bankes) civil war, worry about the plight of his family caught between king and parliament, the siege of the family castle, Corfe, and adolescence...

Both exciting and depressing: filled with interesting people not usually there, like courtiers, government officials, cavaliers, hangers-on; and inconveniences, like filth, plague, overcrowding, the changing fortunes of war and demands on the colleges to help finance it... Some people did "self-isolate," as we now say; but many of the dwindling student body trained with the militia and found some excitement from contact with the soldiers, cavaliers, and prostitutes. Although the professors and college fellows no doubt disliked having their routine interrupted, some took advantage of the influx of courtiers and learned professionals (lawyers, doctors) to enlarge their circles.

What do we learn from this book that is new?

It is novel in its reach, argument, and conclusion.

There is no single “takeaway” except, perhaps, in method. The rich story crosses disciplinary, national, and linguistic boundaries: it uses material from the history of art, literature, and science, and from political, legal, and religious history, mostly from Britain but also from Italy (for Galileo and his revolutionary friends) and Denmark (for the painter, Francis Cleyn).

The book ends with some modern applications of Galileo's image, ranging from advertisements for foodstuffs such as salami and chocolates, to endorsements of political positions from freedom to fascism.

The picture that inspired The Ghost may be the first visual image exploiting Galileo in the service of one or another cause. But the full answer to that demands a read of the book!

Professor Heilbron is an Honorary Fellow of Worcester College, Oxford.

The Ghost of Galileo was published in late 2020 by Oxford University Press and is out now.