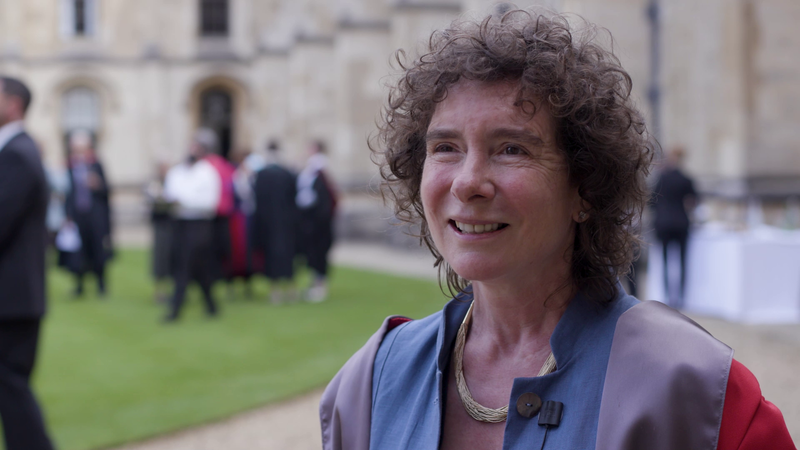 Recently in Oxford to receive an honorary degree at Encaenia, the novelist Jeanette Winterson (St Catherine’s, 1978) talks to QUAD about her memories of Oxford and current affairs

Jeanette Winterson says that the profound in-roads made by women at Oxford since 1978, when she went up to Catz to read English Literature, struck her when recently in Oxford to collect her honorary degree. ‘I met many remarkable women at Oxford [at and around Encaenia, 2021] and that is a profound change. It’s very positive. It cheered me up!’

Back then Oxford was a different beast, and if you were a woman you were in a minority.

‘The gender imbalance was remarkable but not much remarked on. For young women there was always this sense of being outnumbered, that we had to try that bit harder. My generation really wanted that to change, in public affairs and in work generally. It’s a cliché but ‘what you can’t see you can’t be’ still applies.’

She is partly referring to ‘all these portraits of old blokes’ that have traditionally lined Senior Common Rooms across Oxford – but notes the recent effort to change this, with new portraits and much greater diversity.

She is measured about Oxford in 1978. It was and remains a ‘provocative institution’, forcing students to consider their position on just about everything, or at least encouraging them to challenge prevailing wisdom.

She noted at Encaenia, held in September this year due to COVID delay, that ‘This institution for me supported the life of the mind, regardless of who you were or where you came from. There was still that real respect for expanding the mind and letting you go forward and be your best self, and that’s what Oxford gave to me, it allowed me to be my best self…’

But there was a dearth of female role models and this problem infected the curriculum as well.

‘Back then in the 70s, there was the second wave of feminism and I woke up to the fact that society is not a law of gravity but propositional – you make it up as you go; it can be shaped. There was far less awareness of class and gender then. The equal pay law had only recently been passed and it was still a big deal to have your own bank account as a woman.’

Of her three tutors, ‘Two were good and one wasn’t. All three are dead now. It came alive for me in my third year when Jonathan Wordsworth came across from Exeter and taught the Romantics. He had lots of time for his students and enjoyed the process. He wasn’t rushing us out of the door to make room for his research.’

‘Oxford’s literature curriculum was woefully inadequate in representing women. There were the two Brontës, Jane Austen and George Eliot, with a tiny bit of mention of Elizabeth Barrett Browning and Christina Rosetti, but that was truly it. Virginia Woolf was despised and this is forgotten. She was very despised for a long time, dismissed as a high brow, ivory tower writer. But she was a very political writer and challenged patriarchy; they didn’t like it, especially the Leavis’ over in Cambridge who had a lot of power.’

She didn’t know many men as a student and considers that this saved her from some of the class issues of Oxford in 1978 (‘Eton has a lot to answer for…’). As a working class girl from Accrington, near Manchester, she applied to St Catherine’s College believing that as a younger college it would be less stuffy – and she was right, adding that she did know several women at single sex colleges like St Hilda’s and Somerville (both still womens’ colleges then), adding, ‘but these were not working class girls…’

Words came to Jeanette. She once said that she understood them the same way some boys intuitively understand an engine. Oxford was a perfect accomplice in this pursuit. She says, ‘Its seriousness of purpose and the unquestioned belief that the life of the mind was at the heart of civilised life…It was like living in a library and that was where I had always been happiest.’

She offers no pivotal moments or penny-dropping anecdotes, offering that her undergraduate years were over four decades ago. ‘…I’ve lived a big life since then,’ she says.

Her breakthrough novel Oranges Are Not The Only Fruit (1985) was in part an autobiographical account of growing up in a northern town, an adoptee with dysfunctional, hyper-religious parents.

She says of her sexual identity, ‘I didn’t ‘come out’ as gay, that was not how it was mentally constructed then. That has been articulated since then.’

Regarding Accrington, near Manchester, and whether she’d ever go back, she says no, yet is still imbued with the recollection of northern pride:

‘Accrington was a handsome, dignified northern town, with busy shops and jobs, and people had money to spend. When we say ‘northern pride’ it was based on being the workshop of the world. There was a reason for it. It was Thatcher who smashed the north. Now that town and others all have the hollowed-out feel, it’s all betting shops, benefits and cheap supermarkets. That’s why I find this ‘Levelling up agenda’ talk so distasteful. Waffling Boris and his idiots. It was the same Tory party who smashed the north down in the first place, and not that long ago. The north was fine. Then it was smashed to pieces. I hate this inability to recall history even at the remove of just one or two generations. There’s no joy in ignorance.’

She admits to changing her position on the broader subject of education in Britain.

Her success in the Eleven Plus exam and entry to a single-sex grammar school doesn’t make her wish to bring grammar schools back; and paying for two goddaughters to attend top London private schools has led them to abhor private education (‘they’re very political…’).

‘My persuasion on education changes…somehow we need to build a society that values education. Teachers I know in the state sector spend their time firefighting and that is very demoralising. Some of the state schools are very poor. Children have talent, but they are not being taught properly.’

On the subject of campus politics and so-called ‘cancel culture’, she is pragmatic.

‘I think it is a phenomenon of the moment. I don’t believe in it but I also think it won’t endure. Students are transient and something else will come along. It serves nothing. Let people say what they want to, even if it’s repellent, but then have the strong people to push back and challenge it. Don’t turn someone like Steve Bannon into a martyr. Have him speak and then argue back. These people are fascists. They are very skilled on the Right. There’s a theatricality to it; Farage makes a hugely conscious effort to play the bully and the victim in one person. It’s extraordinary. There is a certain naivete to let them speak in the first place if there is no one skilled even to argue back, but not to let them speak at all is a mistake.’

Winterson speaks to me from a base in the Cotswolds, deliberately unspecified, ‘where I chop wood and grow vegetables.’

In London, however, she has a hide-out in the old East End above a shop that she gave up in 2017 owing to a sharp increase in business rates. She has kept the flat but now lets out what before had been a deli and food store to chocolate maker Montezumas.

‘I was just a sleeping partner in the original enterprise. The trouble with little shops is that they make little money. Yet we like independent shops. In Europe and in European villages where we enjoy browsing on holiday, the reason these shops still exist is because of zoning laws that protect food shops. Maybe one day I will have a ‘me shop’ selling things I like such as champagne, cat food, candles and of course my books!’

Jeanette received an honorary degree at Oxford's Encaenia ceremony on 21 September 2021. In this film, along with Secretary Hillary Rodham Clinton, actress and playwrite Professor Anna Deavere Smith, Jeanette talks about receiving her honorary degree and reflects on her time at Oxford.

Jeanette Winterson CBE (St Catherine’s College, 1978) is a British writer. Her work includes novels, short stories, essays, and books for children. She is published in 23 countries and has won numerous awards.

Her first novel, Oranges Are Not The Only Fruit (1985), won The Whitbread Prize for best first novel, and later, a BAFTA for Best Drama for her BBC adaptation. Her memoir, Why Be Happy When You Could Be Normal? (2012) is an international bestseller, widely used in schools to promote tolerance and diversity. Her latest novel, Frankisstein: A Love Story, was longlisted for the 2019 Booker Prize. Her new collection of essays 12 Bytes at AI: How we got here and where we might be going next, was published in July 2021. She is currently working on an eight-part TV adaptation of Virginia Woolf’s Orlando.

Jeanette Winterson was born in Manchester and adopted by Pentecostal parents who prepared her to be a missionary. Instead, she left home at 16 and, after a number of odd jobs, read English at St Catherine’s College, Oxford. She is Professor of New Writing at the University of Manchester.

The Oxford Alumni Book Club have voted for Jeanette’s Why Be Happy When You Could be Normal (2011) as its autumn read, until mid-December.