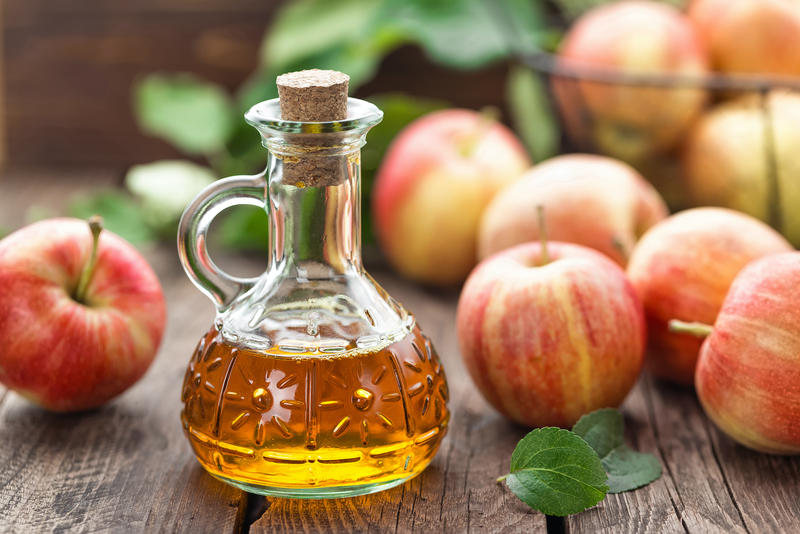 Cider was years ahead of champagne for its bubbles, argues James Crowden (Magdalen, 1977)

One wonders how many bottles of champagne have been drunk in Oxford colleges over the last 350 years. Probably millions, without the students or dons ever considering how the clever little bubbles got there. Yet it was Oxford men who pioneered the ingenious technique of bottling cider for a year or two often with a bit of extra sugar, thus containing a secondary fermentation without the bottle exploding. An important bit of world history worthy of a shared Nobel prize or simply a technique which put top notch sparkling cider on the high table? The technique is now known as méthode champenoise or méthode traditionnelle. But the timings suggest Oxford got there first. Think mid-17th century - 1632-1662 to be precise. Cider apples were fêted and the techniques appeared then. The French champagne industry took off later. 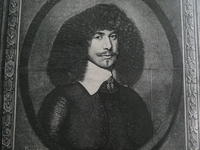 Oxford? How so? Wind the clock back to 1616: Lord Scudamore of Holme Lacy, Hereford (pictured left) enters Magdalen College. 1616 is an interesting year. James 1st is king; Sir Thomas Roe visits the Court of Jahanghir in India; Galileo meets the Pope and Pocahontas arrives in England. Significantly in 1615 Royal Proclamation No 42 prohibits the use of wood for glassmaking and iron smelting. Huguenot glass makers then use coal, thus paving the way for new-fangled dark bottle glass or verre anglais. Glass which can withstand the pressures of a secondary fermentation. Without strong bottles you can’t contain fizz.

For Lord Scudamore, Oxford was a stepping stone to the court of Charles 1st. He oiled the diplomatic wheels with five rondlettes of syder given to key members of the household and Parliament. Scudamore was rewarded with the post of ambassador in Paris 1635-39. Back in Herefordshire he experimented with these 'new fangled bottles'. Household accounts (1631/32) show him ordering bottles of varying sizes, 6 dozen corks, pack thread, a watering can and a new lock for ye syder house doore 1/-  He was onto something. By 1639 he sent 6 bottles of cider to London, down the Thames, past Oxford. 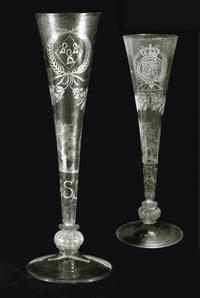 But the Civil war turned everything upside down. Scudamore was captured in Hereford, his lands sequestered and the contents of his London house sold off for a pittance. Amazingly one of his elegant sparkling cider glasses survived (pictured right). It is 14 inches high with the Royal Coat of Arms and his own, plus 'S' for Scudamore and apple trees. You are tempted to call it a 'champagne' flute but the French monk Dom Pérignon, who is often credited with inventing champagne, was only born in 1638. The French don't claim Champagne as theirs till 1698 and the first Champagne house, Ruinart, was only founded in 1729. Voilà!

But the Oxford connection gets better and better. Ralph Austen of Leek was a very different kettle of fish. Parliamentarian and Puritan, he settled in Oxford in 1646 after the siege. Austen worked closely with the military authorities and became registrar to the Parliamentary visitation of Oxford University. A bit like the Thought Police, he became unpopular with Royalists. He also started the world's first bottled cider works in a garden between Queen St and New Inn Hall St. He also wrote books where he commends bottling cider.

'Cider maybe kept perfect a good many years, if being settled it be drawn into bottles and well stopt with corkes and hard wax melted thereon, and bound down with pack thread, and then sunke down into a well or poole, or buried in the ground, or sand laid in a cellar.'

Crucially, an additional note was printed in the margin of the 1657 edition: ‘Put into each bottle a lump or two of hard sugar or sugar bruised.’

Definitely on the right track. Later quantified as a 'walnut of sugar' by John Beale in his 1662 Royal Society Aphorisms, later printed in John Evelyn's Sylva. Evelyn, a Balliol man, liked his Cider very much indeed.

So the technique of bottling cider to make it sparkle was de rigeur by 1656. They used the term 'mantle'. By 1662 London wine coopers seized upon this trick to make flat Champagne wine sparkle, and this was commented on in the Royal Society by Christopher Merret (Gloucester Hall). Other Oxford cider men included Sir Kenelm Digby, (also Gloucester Hall), who not only bottled cider but developed the wine bottle. He was credited with this in a legal judgement of 1662 which retrospectively acknowledged his involvement back in 1632. This sits well with Lord Scudamore's experiments. They knew each other. Then there was James Howell (Jesus College). His tutor's uncle, Admiral Robert Mansell ran a glassworks in London. He employed Howell as Manager, then sent him as a roving agent in Europe sourcing glass makers and barilla, i.e. saltwort needed for fine glass making.

The next Oxford man who left his mark on cider was Captain Silas Taylor (New Inn Hall) very close to Austen's cider works. Taylor, was a composer and a spy for Samuel Pepys, and wrote a wonderful letter to the Royal Society in 1663 where he extols the virtues of bottled cider.

'I have tasted of it, three years old, very pleasant, though dangerously strong. The colour of it, when fine, is of sparkling yellow, like Canary, of a good full body and oyly: the taste of it like the flavour or perfume of excellent peaches, very grateful to the palate and stomach.'

Wonderful stuff. But did it sparkle?

'This makes it drink, quick and lively; it comes into the glass not pale or troubled, but bright yellow, with a speedy vanishing nittiness which evaporates with a Sparkling and whizzing noise.'

No mere accident. Perfection itself. Sparkling cider, you can taste it, smell it and even see the bubbles. Silas Taylor was the Oz Clarke of his day. And Oz was also at Oxford (Pembroke College). Silas Taylor his alter ego?  By 1708 Oxford even had its own Cyder poet John Philips of Christchurch.

So when you knock back your next bottle of champagne raise a glass to the Cider boys of Oxford. Or better still drink sparkling cider! Cider has indigenous terroir, great depth and fantastic tannins… Lord Scudamore knew all about that.