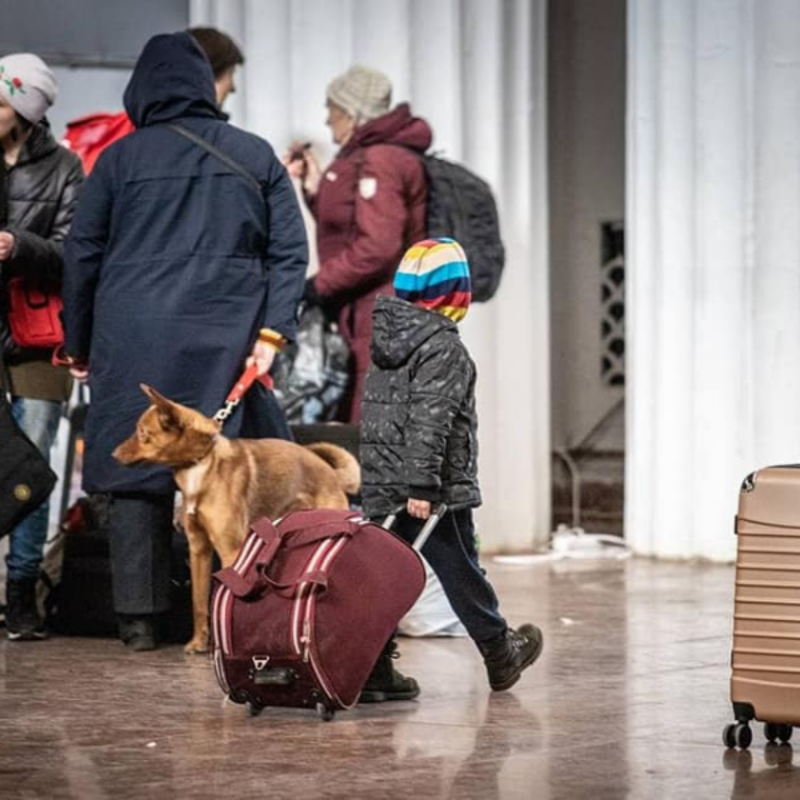 Andriy Tymoshenko (Kellogg, 2014), who works as Head of Management Consulting for KPMG and is the alumni leader of OUS Ukraine, shares his experience of the atrocities happening in Ukraine.

We wanted to share this piece, which speaks from one particular alumnus’ experience of the atrocities happening in Ukraine right now.

Andriy Tymoshenko (MBA, 2014) typically resides in Kyiv, but now finds shelter in a village 90 minutes’ drive from the capital city. Occasionally, he visits to the city, which has been at the heart of the fighting since in February of this year Russia radically escalated the war it started back in 2014 against Ukraine.

He currently works as Head of Management Consulting for KPMG, where he advises the Ukrainian Government and businesses on strategic and operational issues, as well as leading the Oxford University Society in Ukraine for alumni of the University. Prior to his position at KPMG, Andriy worked for UGV where he was responsible for managing international projects.

In 2014-2015, Andriy completed his MBA at Oxford. Fortunately, two weeks ago, Andriy was able to move his family to safety in Poland where his wife and parents along with his brother, sister-in-law and two nieces are currently residing, which he says is crucial for civilians living in areas with the potential to be occupied.

Andriy says: “people are trying to help at every level, obviously the number one is fighting on the front line. One of SBS’s EMBA alumni has taken up arm and joined Defence Forces for example. As soon as mobilisation started, men had to report for duty at the nearest military recruitment centre. I don’t have any military experience, so I was told that I could be drafted in the later stages of mobilisation as the war continues. You give them your details and explain your expertise and any military specialisations if you have any, then you get drafted based on the mobilisation plan”.

We are doing all kinds of volunteer work. Some of us help co-ordinate evacuating people, some of us do fundraising, then we do outreach to international businesses and international organisations.

Though Andriy is not trained to fight, he is able to help in other ways through support and fundraising as well as utilising his skills in consulting. He says: “we are doing all kinds of volunteer work. Some of us help co-ordinate evacuating people, some of us do fundraising, then we do outreach to international businesses and international organisations. I do interviews with foreign media and I also, in my current capacity, advise the government on assessment of the effect of the war on certain areas of the economy, and we are developing plans on restarting and rebuilding the economy ”.

Though the conflict has escalated this year, the war with Russia is nothing new to the Ukrainian people. Andriy says: “we have had this war with Russia happening for 8 years already, since 2014, so there’s an experience of decentralised assistance and volunteering. There are a lot of small initiatives for getting necessary military equipment and humanitarian help from outside of Ukraine and they help with logistics and sending it to those who need it.”

Andriy says that everyone is pulling together and trying to help in whatever way they can; from spreading the word, to trying to raise funds for vital equipment, to helping the refugees. He says: “There is also another initiative which me and my friends support which is cooking meals for people who are helping to evacuate refugees and working long hours; sometimes it is just difficult to get a proper meal. In Kyiv restaurants used to be closed until recently, some are open now, but they are still working in the kitchen and preparing meals for the military and volunteers. Everyone who are in Kyiv is very busy”.

The estimated total number of those who have fled Ukraine is well over 4 million, with the vast majority being women, children, and the elderly. This in turn, has meant that a lot of professionals, primarily female business professionals, have been forced to flee their homes and their country to refuge safely elsewhere. As a result, there are thousands of people with ranging skillsets looking for remote work, so they can continue to provide for their families.

“Men are not allowed to leave due to the martial law, only if you reach certain criteria like being above the age of 60 or you have more than three kids, amongst a few other exceptions. The men may be in the military or joining the defence forces, but if they’re volunteering without being paid in some cases the women will have to provide for those who are left”.

Andriy also explained that though the economy was developing at quite a good pace in recent years, there is now a gap in varying industries, for those who have fled but also for those who are still in Ukraine relocated to Western part of the country where the situation is not quite as dangerous.

Andriy even speaks for some acquaintances who have been able to start new businesses outside of Ukraine, but they are going to need support. He says: “people need to work, they are willing to work and not be on a welfare, there are people who are starting businesses and employing those who left the country.”

“In terms of the platforms for filling positions and jobs boards, there are several that were designed for that. I would like to use this opportunity to reach out to the alumni community and ask them to publish open positions, especially remote ones on these platforms.

There’re also a lot of organisations that provide all kinds of support to Ukraine, so I would like to ask everyone to get involved in any possible way from public support to direct support of these organisations. It’s clear now that Ukraine is fighting for its existence as a sovereign country and as a nation, so every bit of support is important.”

For more information on the situation in Ukraine and to show your support we actively encourage you to support the Disasters Emergency Committee (DEC) which is the Ukrainian Humanitarian Appeal: https://www.dec.org.uk/

In 2014-2015 Andriy Tymoshenko completed his MBA at Saïd Business School, and now leads the Oxford Alumni Group for Ukraine. There are currently more than 350,000 alumni around the world and in excess of 150 regional alumni groups in over 90 countries.

This piece is republished with permission from the Oxford Business Alumni website.

Ukraine Conflict Appeal
In line with Oxford’s long-standing tradition of support for refugee scholars, the University and its colleges have launched the Ukraine Conflict Appeal Fund. The fund will help to support up to 20 undergraduates and 20 postgraduates though a Studentship scheme for the 2022-23 academic year.