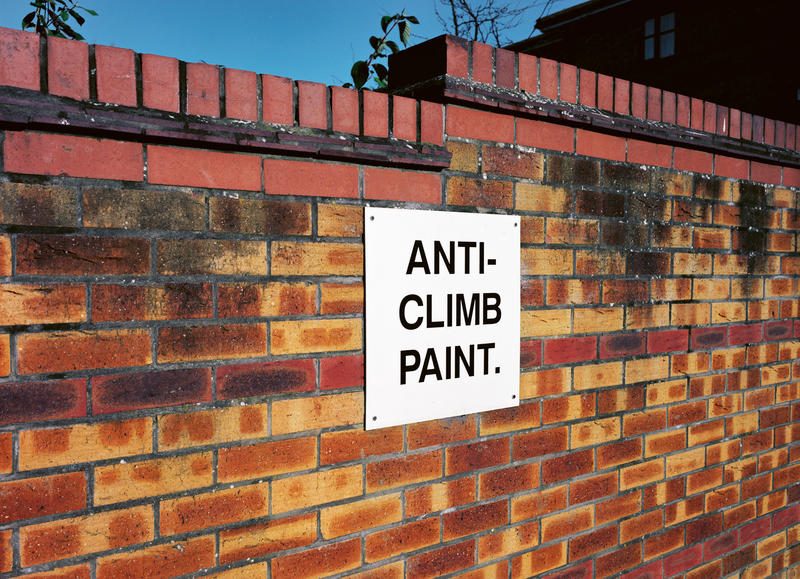 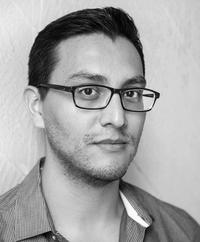 His book, which is the direct product of his DPhil, is beautifully produced by Dutch Publisher The Eriskay Connection.

That’s important here because the fine art photographs of Oxford presented throughout are an immaculate but direct challenge to the hackneyed images of the Dreaming Spires. 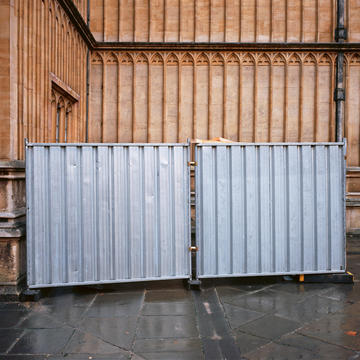 The closest we get to spires is a shot of the Divinity School marred by a huge steel panel. It seems obvious that the panel is the point.

In another shot, somewhere way out in the deracinated wastelands of ‘not Dreaming Spires’, a brick wall and a large, emphatic, permanent sign: ‘ANTI-CLIMB PAINT.’

A double-page spread is given up to an underpass that is not identifiable as Oxford at all. It’s just concrete and road. The floating city, impermanent. Anywhere.

Yet on each and every page we get a sweet and scrupulous narrative of Soto’s time at Oxford.

For the times we have been living through, it is also, already, historically freighted:

I am reading at the Café Nero inside Blackwell’s when I suddenly recognize a voice behind me.
She tells her companion she feels jet-lagged but also disappointed to have missed the election results as they came through. Trump was already president by the time she arrived at Heathrow. Like the rest of us, she is still grappling with how this outcome will change the world. I had missed out on tickets to hear Margaret Atwood present a new edition of The Handmaid’s Tale, so I take these few minutes of ordinary conversation as a great gift.

Next to these disparate recollections Soto places a scrupulously taken image of a shopping trolley filled with rusty old cans of paint.

Elsewhere, and memorably so, we hear how on the day of the Brexit referendum Soto argues via text message with a British-Brazilian friend, who takes the side of Leave. They never speak again.

We agree that I won’t be able to write about the book or our video interview via Teams without interpolating my own meaning, or the reader theirs.

He offers that ‘Language changes and expands a photograph, but it doesn’t necessarily explain it.’ 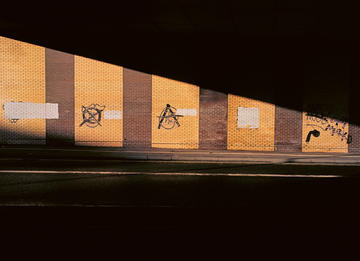 The very first words in the book refer to ‘affinities’ between words and pictures. ‘They run in parallel and inform each other but they are not trying to explain one another.’

This book offers no such guide, and images remain caption-less, forcing the reader to construct their own meaning.

Arturo offers a point of departure in the form of a tourist guidebook of Oxford. It will take you round the ‘highlights’, setting up a hierarchy that sups on an inheritance, a canon if you like. There is an implied truth, an authority.

Or does it immediately eat itself up in cliché and poorly rehearsed history, like the undergraduate telling the tourists whatever they like from the roofless double-decker bus that picks you up outside Blackwells?

‘Psycho-geography subverts how you wander around a city.’ 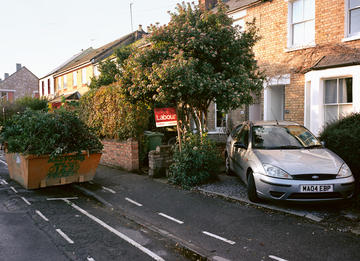 Arturo talks about perceiving the world in ‘non-productive, non-Capitalist terms’.

At the centre of this comment is partly Arturo’s own identity as a Mexican. I suggest that there is a communitarian empathy for the poor, because so many of the photos are, frankly, Oxford as favela.

But he counters that there are no people in any of the photos.

‘I always went off on my walking during the day,’ he says, ‘and there was never anyone around but it is also the case that as soon as there is, they dominate the image.’

He says at one point in the book that he has no interest in the countryside and elsewhere that Oxford’s carefully controlled rural element (rewilded corners of college gardens, Port Meadow yet again) is a bit daft.

This is a book of graffiti and slum and broken brick and creeping damp and rotting concrete.

There’s a wonderfully funny bit where he discovers Mexican food in Oxford,

The only ‘Mexican’ restaurant in Oxford is Mission Burrito, whose slogan is “Authentic Burritos passed on from Mexico via San Francisco to the UK.” That should serve as enough warning, but the place does surprisingly well. To add insult to injury, it is mostly staffed by Spaniards, and the music selection alternates between Colombian cumbias, Cuban son, and Puerto Rican reggaeton.

If it wasn’t also the work and research that was obviously ongoing in the background, this being a DPhil in the making, you might think the many cultural references an overload, yet they are worn very lightly (but scrupulously).

It’s a diary of sorts date-stamped, ‘BREXIT-Trump-Pandemic’ although the reader should not misinterpret the NHS rainbow on page 102-3.

‘It’s a deflated metallic balloon in someone’s window. It predated the Pandemic and the book has no reference to the Pandemic as such.’

That’s highly informing here. Anyone looking at this image will see (a) a rainbow and (b) assume it’s a pro-NHS gesture during COVID. 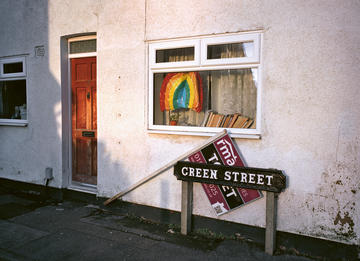 But they will be totally wrong, not that it necessarily matters. Meaning is a shifting sand, surely a deeper point here.

It’s noteworthy, the degree to which the written ends in missteps or regrets, things that were meant to happen but didn’t. He says he tried to get free pizza when the pizza joint Franco Manca opened, but they had long run out. The petty disappointments of student life.

He mentions James Attlee’s Isolarion which is now in a second edition, originally published in 2007 and struck a huge chord with the readers of Oxford Today - a psycho-geography of the Cowley Road.

We agree that I won’t cite it as a source for Arturo’s project as such, but he later references the broader point that meaning is personal and political at the same time.

I suggest that Arturo’s book book could be baldly read as a not-too-subtle break-up note to Oxford penned in photos.

But he rejects that reading, laughing, then cites writer Will Self exhorting the ‘expanding of our sense of aesthetics for places,’ and Depression-era photographer Walker Evans’ praise of ‘vernacular architecture’ which might certainly include bodge jobs in brick somewhere out in Barton rather than the perfectly wrought proportions of the Radcliffe Camera.

Around all this I suggest that the book feels claustrophobic and indeed depressing, especially if you sit down to read it carefully, page by page. The imagery is unrelieving if you find the unlevelled up bits of British cities depressing.

Soto says that it was hard for him too, ‘hard to resist the normal approach, the set piece views,’ or in the language of the book blurb, the ‘visual imperatives of [Oxford’s] ancient University.’

But he insists that the decision to (principally) walk around Barton and Blackbird Leas and Cowley and Botley rather than Summertown and Broad Street were partly his own reality.

First of all, the Ruskin School of Art is situated right on the Cowley Road, so don’t expect to locate the artists there and only have them take pictures of the Bodleian.

But it’s rather more than that. He says he dated a woman who lived in Botley, not connected to the the University, and he suddenly realised one day that she never went ‘into the city’ and saw no need to. She lived entirely in Botley, a situation he likens to his memory of the neighbourhood of Queens relative to Manhattan. Both are ‘New York City’ but they offer very different lived realities for different individuals.

The publisher blurb starts, ‘A Certain Logic of Expectations proposes a counter-narrative of the British city of Oxford…’

It’s very hard to resist feeling the impact of BREXIT, perhaps partly because of the wider debate about truth and reality it engendered.

In Arturo’s very first paragraph he states the importance of ‘distinguishing reality from reality,’ as a friend once told him.

That enigmatic statement hovers over the entire book.

Describing himself as a ‘Leftist’ and a ‘remainer’, Arturo accepts that the book might be interpreted politically, but only insofar as all artistic statements can be so construed.

There are depictions of the Conservatives, Liberal and Labour in the book. There are no obvious biases or conclusions to be drawn.

Arturo accepts that broadly speaking his book might seem to pull in a certain direction, but there is almost no depiction of the University at all.

He says that he hopes to return as an artist-in-residence at one of the colleges, which leaves the reader thinking of the book like a Rachael Whitehead sculpture, when the imprint of what is missing is what you get.

There’s almost no visual reference to the University in this book but one feels that the author rather liked the place.

Arturo Soto was born in 1981 in Ciudad Juárez, Mexico. His work has been exhibited internationally and has published the photobooks In the Heat (2018) and A Certain Logic of Expectations (2021). Soto holds a DPhil in Fine Art from the University of Oxford, an MFA in Photography from the School of Visual Arts, and an MA in Art History from University College London. He curated the exhibition Foreign Correspondence at the Architectural Association and took part in Forecast Platform at the Haus der Kulturen der Welt. He resides in Mexico City.

Link to the exhibition