THE LEGENDARY COUNCILLOR OF SHEPSHED 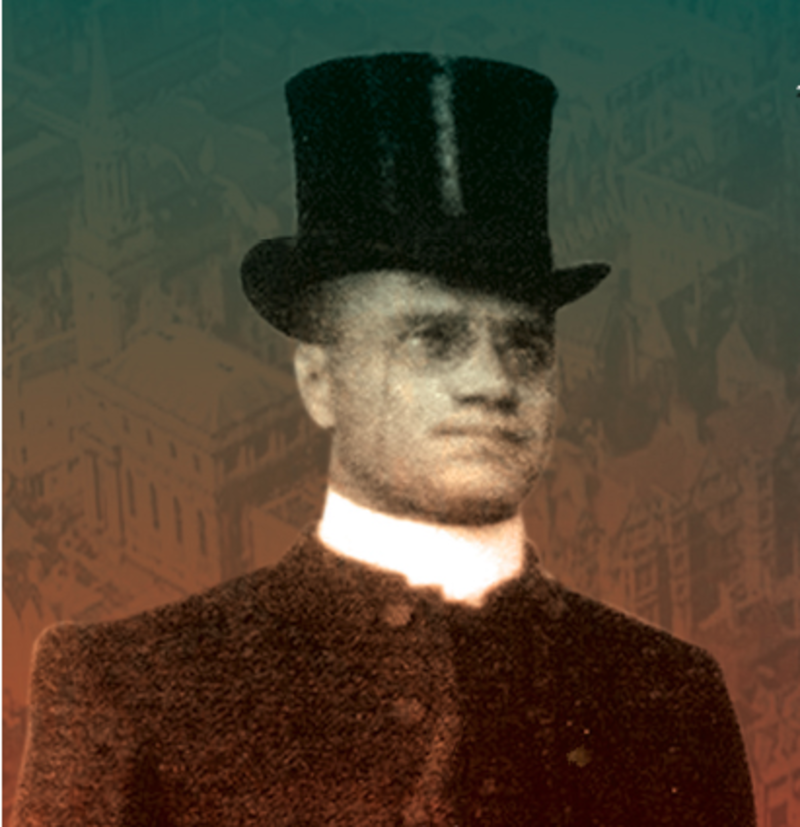 THE LEGENDARY COUNCILLOR OF SHEPSHED

The thing about James Arthur Harley (1873-1943, Harris Manchester, Jesus 1907) is that he was blazingly bright, academically and in every other sense.

Born in Antigua, it was drilled into him from a young age that earthly salvation could be achieved by education. That was his only option out of the country.

So off he went, and how! A passage to New York City at the turn of the century, at a time when America had horrific racial prejudice.  A cluster of religious seminaries, Yale University Class of 1906, a degree in Semitic languages from Harvard University and a gold medal for his debating skills, then to Oxford.

At Oxford he was unusually registered at two colleges simultaneously, today’s Harris Manchester College and Jesus College, where he achieved a degree in theology. He also acquired a Diploma in Anthropology at the Pitt Rivers in 1909.

It is hard to imagine any individual acquiring a more glittering array of academic trophies, and becoming a history maker as one of the first cohort of students to take the Anthropology Diploma.

As the author and historian Pamela Roberts says, one of her aims in The Adventures of a Black Edwardian Intellectual, The Story of James Arthur Harley, which is published by Oxford-based publisher Signal Books in October 2022, is to showcase the multi-dimensional lives of black people and success as much as setback.

Although the politics and prejudice of race engulfed Harley for each and every year of his 70-year span, including his time at Oxford, Roberts says,

It isn’t a narrative of enslavement about a black man being beaten, brutalised or emasculated. It’s about an uncompromising black man standing, proud and strong and looking any white man in the eye, a dangerous undertaking at the turn of the 20th century.

Oxford University has reason to express its profoundest gratitude to Pamela Roberts, for it was she who in 2013 published the first volume devoted to the achievements and legacies of black scholars at Oxford, titled Black Oxford: The Untold Stories of Oxford University's Black Scholars.

In Black Oxford, Roberts acknowledges the first known black student at Oxford, Classics student Christian Frederick Cole (Univ, 1873), and Britain’s first black barrister, in whose memory a plaque, (Roberts was the catalyst for this), is situated in Aristotle Lane, off the High Street. 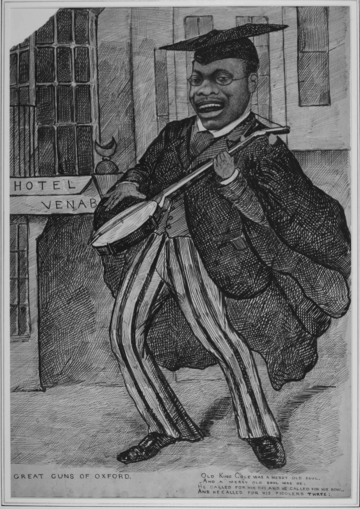 The only known image of Oxford’s first student (shown right) is a rather cruel caricature depicting him as a minstrel. This was a deliberate portrayal that de-emphasised his intellect. It was a portrait of a black man seen through a white, upper-class lens of elitist privilege, soaked in prejudice.

What we also learn in Pamela’s latest book, The Adventures of a Black Edwardian Intellectual, is that systemic and suffocating prejudice was everywhere. There was a black elite in Washington who looked down at Harley for being West Indian, further complicated by his ‘British’ status, Britain having colonized Antigua in 1632.

Yet in the eyes of white America he remained black, albeit ‘mulatto’, his father being white and his mother black. His friendship with Alain LeRoy Locke (Hertford, 1907), the first black Rhodes Scholar in Oxford, was nurtured at Harvard and rested on a strong view that other blacks were inferior.

Roberts ‘discovered’ Harley after tracking  down a suitcase of documents belonging to a local historian in Shepshed in Leicestershire, where Harley was a curate after leaving Oxford with his theology degree, returning there later as a Councillor in the late-1920s.

These documents ignited the real work that led Pamela all over the world tracking Harley’s movements, starting in his native Antigua and then moving to the US, Barbuda and back to the UK.

Balancing his many academic prizes was Harley’s oratory and his common touch. Here was a man who intuitively understood hardship. When he was unfairly dismissed from his position as a curate in Shepshed, the parishioners unsuccessfully petitioned for his return. Thwarted, they presented him with £30 of gold coins and a framed testimonial, an extraordinary gesture of heartfelt loyalty from mostly cobblers and other down-to-earth folk, none of whom would have been wealthy.

In short, Harley was loved. By all accounts he galvanised the Parish of Shepshed, a small Midlands town near Loughborough, to such a degree that he threatened the incumbent vicar.

Then he was off to another ecclesiastical post at Marshside in Kent where again he was held back by Church of England bureaucracy and foot dragging and what appears to have been racial prejudice, and perhaps to a degree also his proud and hot temper.

The trouble was that Harley had the measure of most people and knowledge that outstripped them. Knowing that he was subjected to a multi-dimensional prejudice as well brought his frustrations to the boil.

Roberts points out the complex amalgam of prejudice in Edwardian Oxford, and England at large. There was anti-Americanism as well as racial prejudice. Some Oxford colleges didn’t want to take Rhodes Scholars. Where Alain LeRoy Locke was concerned, the awarding committee only found out belatedly that he was black. There was a secondary wave of racial prejudice leading to a secretive attempt to thwart him. Luckily this didn’t succeed, but it remains hard to know if the five Oxford colleges who refused to take him did so on anti-American or anti-black grounds or quite possibly both.

Harley’s wife, Josephine Lawson, a qualified teacher was from a black elite family in Washington. She eventually joined Harley at his church position in Marshside. Marshside is in deepest, rural Kent and a whole world away from the bustling, elite existence that Josephine would have enjoyed in Washington DC. Her arrival in Marshside must have been a profound shock.

The union didn’t endure and she eventually returned to the US and her teaching career.

Roberts is an award-winning creative producer, historian, and narrative ‘disruptor’ around her scholarly work. She wrote a play, A Scholar and A Statesman, in 2017 that was performed just days after the fire at Grenfell Tower, drawing on imagined scenes from Harley’s life, and also trying to draw down a greater sense of Josephine.

‘It was very hot that evening and one of the Councillors in Leicester admitted that his intention had been to sit at the back of the theatre and have a surreptitious nap…but he instead found the scenes electrifying.’

In one such scene, drawn from a true incident from the later portion of Harley’s life when he was a Councillor back in Shepshed, he took joiners along with him to fix a variety of housing problems that residents had complained about.

Other members of the council complained that he wasn’t following protocol, but what they actually meant was that they owned building companies that would have received the contracts had the matter passed through cumbersome processes.

It was corrupt, or semi-corrupt. Instead, Harley was able to note that he headed the Housing Committee himself and proceeded to effect immediate repairs. That is how you earn the respect of ordinary citizens.

Rather joyously in this mature phase of his career, Harley printed his own news sheet berating the Council across a broadside of issues. He was a classic insider-outsider.

Having by then had a completely distinct career as a munitions worker during the First World War working twelve hour shifts in a factory, and having put the Church of England behind him too, there is a sense in which his return to Shepshed put him into his element.

He used his skills of oratory to dismantle lesser opponents, his rhetorical skills to write and print his newsletters, and his personable touch to help numerous people improve their lot, including offering tutoring to help families get their children up the educational ladder.

When World War Two came Harley’s health was failing him, no doubt partly from overwork. He made a comeback but then relapsed and died in May 1943 aged 70.

Not wanting this feature to be preoccupied overly with the Oxford part of Harley’s life, nonetheless there is a wealth of Oxford detail, particularly in Chapter 11. Roberts rightly interrogates Harley’s decision to pursue Oxford’s then brand new Diploma in Anthropology at the Pitt Rivers Museum. 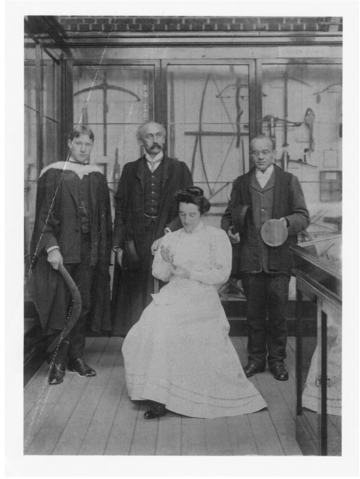 It gave him a very full workload because it was on top of his main theology degree. There is also a wonderful picture of him at the end of the process with his two classmates (pictured, left, caption in suffix).

Roberts says that some elements of the Diploma contained dubious material about craniology, leading to unproven but then modish ideas about scientific justification for racism.

But Harley appears to have been fired up by an innate thirst for knowledge. He would have become aware of the limitations both of Oxford’s theology and Anthropology curricula.

Put differently, the world of 1909 was crackling with possibility and Harley was determined not to miss out.

Despite the difficult life that he lived, James Arthur Harley’s biography is enthralling while Roberts’ careful research has brought the whole period to life most wonderfully.

The Adventures of a Black Edwardian Intellectual, The Story of James Arthur Harley

This feature forms the second of a QUAD-specific, three-part series of author profiles to mark Black History Month.