AMERICA COMES TO THE ASHMOLEAN 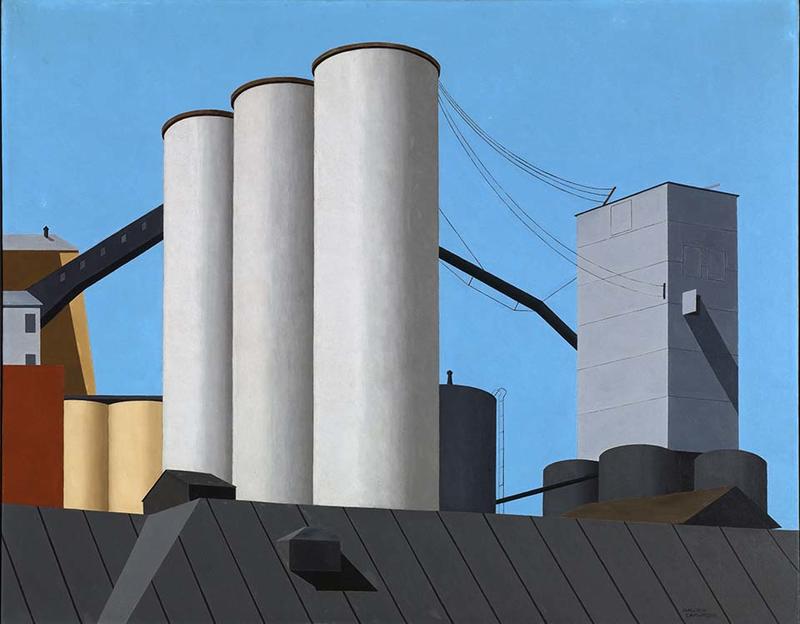 AMERICA COMES TO THE ASHMOLEAN

Not ‘cool’ as in ‘groovy’, says the curator of this exhibition Dr Katherine Bourguignon, but ‘cool and calm and collected,’ and ‘clean and precise and efficient.’

In some ways a home-grown American version of Germany’s Neue Sachlichkeit, this particular strand of early-mid 20th century modernism wrestles modernity to the ground and renders it motionless. Unlike the tempera and glaze methods of, say, the German Otto Dix, and his preoccupation with shocking human subject matter, what defines the American approach is a machine aesthetic that seeks to disguise its brushwork in an illusion of not-artness, hence the term ‘precisionists’ as a term to sometimes describe some of these artists (but not Hopper). 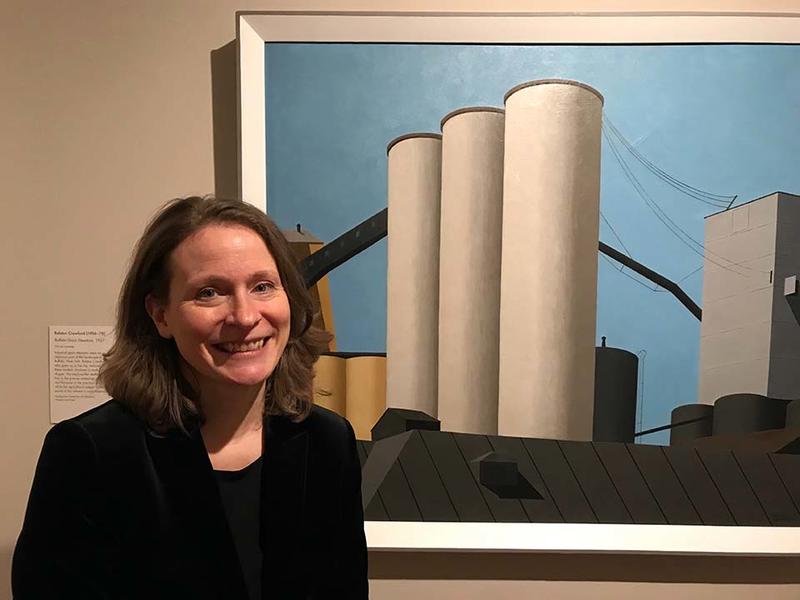 The curator of the show, Dr Katherine Bourguignon, of the Terra Foundation for American Art, stood in front of the painting Buffalo Grain Elevators by Ralston Crawford

Above all, and far away from the teaming, all-too-human filter of the ‘roaring twenties,’ these paintings are more often than not without any humans at all. If they are not colourfully abstract as in the manner of Edward Steichen’s Le Tournesol (The Sunflower), c. 1920, or gaudily energetic with the big city vibe as in Charles Demuth’s I Saw the Figure 5 in Gold (1928), then they are absolutely still and sober as in Charles Sheeler’s fantastic Americana (1931), an interior that links to Shaker art and thus offering up a lineage for minimal/utilitarian indistinguishable from the Protestant roots of America. 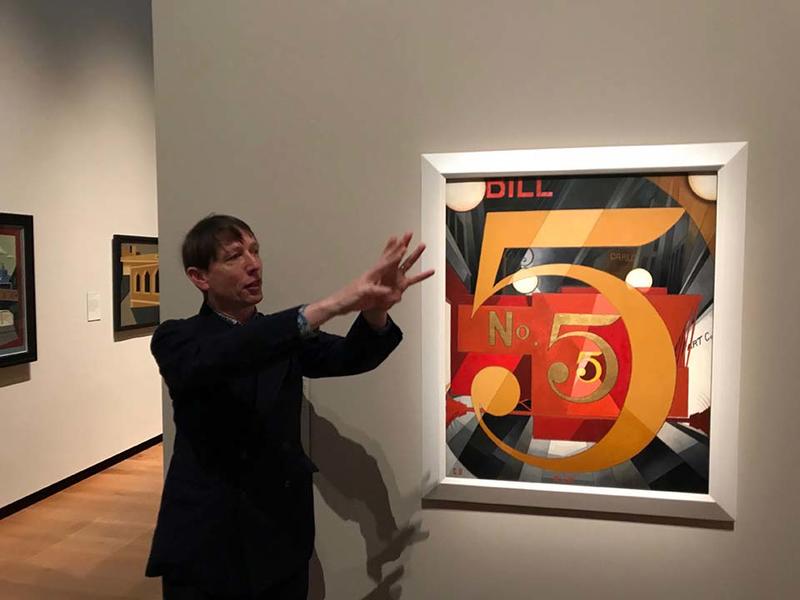 Speaking of Sheeler’s Americana, (shown below), this is the first time the painting has ever left the US. Sixteen other works are also abroad for the first time, underscoring just what a coup this exhibition represents for Ashmolean Director Dr Xa Sturgis. Sturgis explains that his primary debt is to the Chicago-based Terra Foundation for American Art, who have provided 27 works of art, while the Metropolitan Museum of Art, New York, has supplied a further 18 key loans. There are 80 in total including an early experimental film, photographs that render the smoky reality of industrialised America calm and beautiful and then charismatically and centrally the paintings. 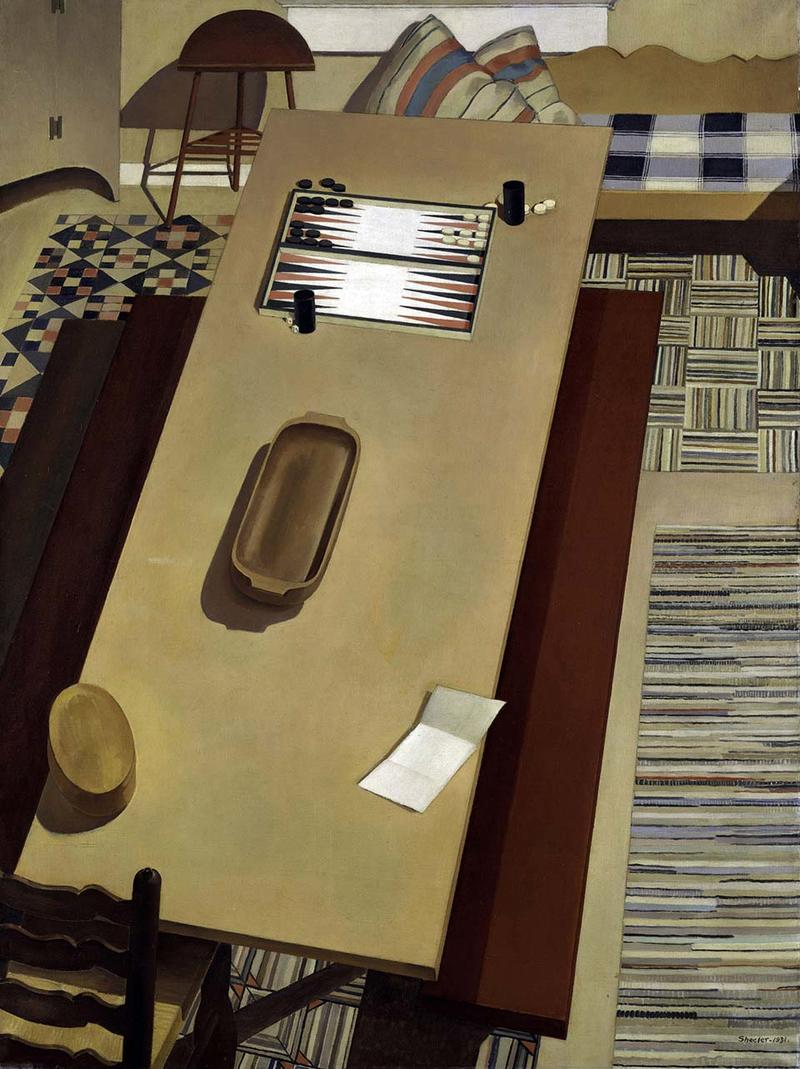 Sturgis notes that not a single piece in the exhibition belongs to the Ashmolean. ‘The point is sometimes to shed new light on something familiar, but in this case it is instead to tackle something completely new, at least to a primarily UK audience.’

In fact some of the paintings are set pieces in the US modernist pantheon. Demuth’s I Saw the Figure 5 in Gold took as its motif a gold number 5 seen on the side of a bright red fire truck hurtling through a grey city. Integral to it is a not so subtle dedication to poet William Carlos Williams. The Australian critic Robert Hughes said of it, ‘one picture so famous that practically every American who looks at it knows it.’

Yet by no means are the other artists here household names even in America. The culmination of the ‘cool’ trope, arguably, comes in (ironically) rural scenes where the emptiness of the American landscape serves only to intensify the human-lacking scale of industrialised farms. Ralston Crawford’s Smith Silo, Exton (1936-37) and Buffalo Grain Elevators (1937 - pictured in the title panel) are unquestionably high points in this approach, as interesting for their smoothed technique as for their stark subject matter.

O’Keeffe is there and Hopper is there, bookending the show for a sense of crowd pleasing big names, yet neither quite fits. O’Keeffe is off on her own in a muddy palate of black, while Hopper’s breathy, brushy cinematic atmosphere of implied narrative, while it is intensely modernist, has no particular relation to the ‘cool’ of this show, which if anything serves to emphasise just how mediocre he was (and is?). Of course that’s why we love him and it says something about 2018 that we do.

But if you focus on what you don’t recognise, contrary to the filter bubble-ness of our times, the exhibition is a cracker.