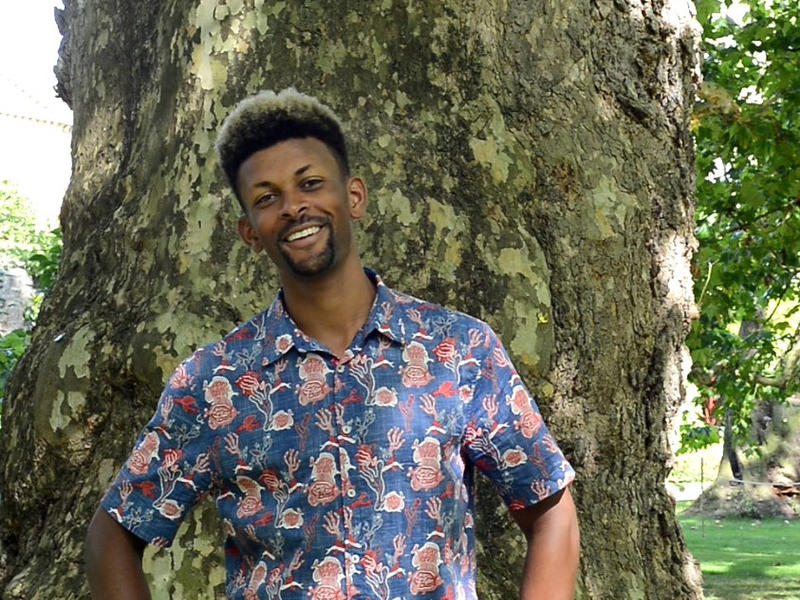 Abidine Sakande (St John's, 2014) looks back at his time at Oxford

How would you describe your Oxford experience?

Oxford was challenging. The jump from Freshers’ week to getting stuck into the work hits you like a train, but as you settle into Oxford it is a really great place and I grew a lot both academically and socially with my friendships and I played a lot of cricket – which I play professionally now.

I was part of the Blues side while I was at Oxford and part of the MCCU, which is the combined Oxford and Oxford Brookes team. The fact I was able to play cricket whilst studying was super important to me.

What is a typical day for you now?

As a professional cricketer, I get paid to go out on a field and play a game that I have loved since I was 12 years old. It is hard work, and you never know where you will be from one week to the next in the summer. But, I feel very lucky and privileged to play for a living, traveling to Australia and New Zealand, opportunities I would not have had otherwise. I am grateful to do so for as long as it lasts.

Were you aware of diversity as an issue when you were at Oxford?

I think definitely I was aware that diversity is an issue that Oxford faces and continues to face.

I was one of a very small group of ethnic minority students at my college. When I was here the African Caribbean Society was only in the very beginning stages of a movement to bring people together from across colleges, so I am sure it is very different now. At the same time I wouldn’t say it was a limiting factor, I never faced any direct discrimination. It was just something you couldn’t help but notice, your face stands out from those around you.

How did Oxford prepare you for your profession now?

I was based in Sussex, and had always maintained links with the team there, so my path may have been a bit more fluid than some others.

However, when I started at Oxford at 18 I wasn’t ready to play traditional cricket. When I graduated at 21 I was much more so, and playing for the Blues definitely helped.

Cricket careers only last so long, and having an Oxford degree means that whatever else I go on to do outside of cricket, it will definitely help. At the moment I think I would like to do more studies in the environmental sector or international development.

How did you get involved in the Black Alumni Network?

I met Naomi and heard about the great work she is doing with the access programme Target Oxbridge, and went to a couple of events about the network.

It makes a lot of sense to me that you would want to have a community of people who once you’ve left - outside of just being friends at different career stages (some further along who attended ten or maybe five years ago, others new graduates), who might be able to tell you about opportunities, or just to discuss how Oxford has changed for black students. I love the idea of it, and how it is also promoting the image of black excellence. Campaigns like Black men of Cambridge have been quite powerful in reshaping the narrative. People can see that these are Oxford graduates, and it takes away the mythology of Oxbridge being an elitist institution that’s not for ‘you.’

What does Black History Month mean to you?

There are two sides to BHM. It almost shouldn’t exist in a sense, because if black history was incorporated into the rest of the school history curriculum, there would be no need for a month.

On the flipside, I appreciate that there is a focus for a month. Funding and research goes in to understanding the experience of black people in Britain as part of a wider historical sense. Because of that focus it gets more attention in the media, so people are aware of it.

My experience of it was very limited. My school didn’t particularly focus on black history, it was something I picked up on myself when I left.

For schools it is a voluntary option and I think that should change. If a teacher is keen on it, pupils hear about it, but if they are not, you wouldn’t even know it existed.

Who represents black excellence to you?

Different characters for different reasons are representatives of black excellence. People like Idris Elba, who I really respect as an actor. Also, Barack Obama for obvious reasons, not just being a black President, but also the way he maintains his composure and dignity. And if you compare it to the way Trump is as a leader, he was always someone who seemed quite calm and aware of his responsibilities.

Personally, my Dad. He has always been someone I truly admire and respect for how he has gone about his career, raised me and my sister, and generally there for me, pushing me when I need to be pushed.

Thanks to a media fascination with the days of Oxbridge past, Oxford’s longstanding diversity problems are well documented. To a lesser degree, so are the University’s increasing efforts to encourage applications from students from under-represented backgrounds, and build a more inclusive environment in general.

But what of the black and minority ethnic students who do successfully gain a place at Oxford University? Beyond the click-bait headlines Oxford has forged a connection to something much more powerful, and worthy of celebration: black excellence.

In recent years, Oxford has made strides towards addressing the University’s student body imbalance, and is currently attracting more black and minority ethnic students than ever before (18.3%) as a result.

Launched in 2017, the Oxford Black Alumni Network connects hundreds of black Oxford graduates with peers from across the generations. Through these connections and sharing their achievements, the platform allows them to be power players in the University’s legacy, future, and access to higher education in general. For current and aspiring Oxford students, their experiences are an encouraging appeal to dream bigger, achieve their goals and follow in their footsteps.