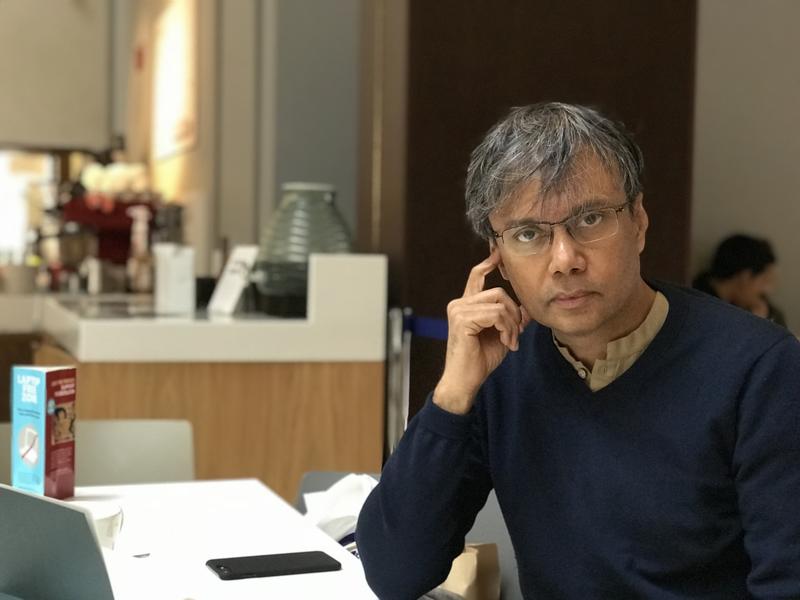 I didn’t realise that Amit had just travelled from Paris, rather than East Anglia where he is a Professor of Contemporary Literature. We meet in Broad Street, punctually at 2.30pm on the third day of Michaelmas term, 2018. He’s just eaten fish and chips at the King’s Arms with his wife, reporting that it was terrific – a tip.

A few minutes later, over a double shot black americano in the Weston Library, he explains that his current gig is a just-begun fellowship at the Columbia Institute of Ideas and Imagination, which is in Montparnasse in Paris. The Institute wants ‘individuals inclined to challenge prevailing intellectual habits.’

But, Chaudhuri adds, ‘arranging the visa was a headache.’ Born in Calcutta and then raised in Bombay until doing a first degree at UCL followed by a DPhil at Oxford (Balliol, 1987), Chaudhuri has stood by his Indian passport as a matter of principle rather than necessity, a luminous detail as it turns out.

A seven-times novelist garlanded with prizes, Chaudhuri is officially in Oxford to launch a book of essays published by Oxford University Press, called The Origins of Dislike.

Much later in our chat I refer to it as non-fiction but he intuitively rejects such simplistic categories. Critical writing is creative writing, it creates something and that something can be as powerful or even more so than the novel that follows – he cites the notorious JG Ballard novel Crash (1973), suggesting that Ballard’s introduction was more interesting than what followed.

Turning to the essay, he says he likes it as an artform because it might be a vehicle for questioning received notions, whether fiction and non-fiction, or art and life. He champions the idea of writing as a form of living. He likes essays because they can trample the demarcations, coming one from the heart, one from the head, another from both. Poet and ‘craft’ writer can hug here. He’s a great composer of music. The essays themselves break down sometimes into short paragraph aphorisms, literary espresso shots.

The Origins of Dislike is like an exploded mass of illuminating fragments, any one of which could be digested slowly and with due consideration.

I start by liking (tricky word!), the straightforward manner in which Chaudhuri says early on that dislike is not to be confused with distaste:

‘Dislike’ has to do with the difficult process of life and renewal; ‘distaste’ – or, in Bengali, ‘bishwad’ – is a withdrawal from living, an extreme waning of interest, when the flavours that once diverted us begin to mean nothing.’

In a lovely aside, Chaudhuri notes in juxtaposition that even on her last day on earth, aged 90, in July 2016, his mother asked for a few spoonfuls of vanilla ice cream, ‘which were given to her.’ Completing the thought, he adds, ‘Dislike, in my mother’s case, never denoted a loss of appetite.’

Another answer to the title of the book, which is of course not exactly expressed as a question, concerns temperament. Unlike sensibility, which can be learned, temperament, suggests Chaudhuri, is ungovernable and might lead a writer to write in the epic mode during a period of lyric ascendancy, a suicidal career move. ‘Yet what I’ve called ‘temperament’ dictates that one undertake a suicidal activity.’

Go with the flow and you’ll just end up in a vapid comfort-zone, he seems to be saying.

Why do writers past and present spend such an inordinate time fighting with each other? Ego aside, Chaudhuri recognises the value of it, because where liking something is typically spurious, disliking something is a specific point of interest. Dislike is real.

He notes, with apparent delight, writers who deliberately suppressed publication of their own work. Franz Kafka published very little, as did Fernando Pessoa. Jibanananda Das and Arun Kolatkar ‘withheld some of their most important work.’ He continues, ‘This is not a courtship of failure. It’s an attempt on the part of these writers to fashion the terms by which they are read.’

I ask Amit what he intends to say later at the Blackwells book launch. He replies that he’s going to read the writers checklist section, where he lists the markers of conventional writerly career success: being published on both sides of the Atlantic, perhaps by Jonathan Cape; being reviewed (and by the right reviewer in the right publication!); winning prizes (and the ‘right’ ones!), and even then it’s not enough. Even being Ian McEwan leaves Ian McEwan wondering if he’s still got what it takes.

Being ‘liked’ is a shallow matter, he is saying, and market success is not the same as being a great writer or writing a ‘classic.’ Producing novels and writing novels are not the same thing, he says. Professionalisation and legitimacy are not the same thing either, he says, owning an ambivalence about being a university professor, and citing Oxford alumna Dame Marina Warner’s well publicised resignation from an academic post in 2014.

This all comes to a head in a blistering attack on the frenzied run-around of the literary marketplace, where long ago capitalism usurped just about everything.

Chaudhuri recalls notes how pop group Smiths frontman Steven Morrissey’s autobiography was published in the first instance as Penguin Classic, in October 2013. After a blah of marketing hype it went straight to the top of the best seller lists. Chaudhuri writes with a wit drier than the Thar Desert in drought, ‘It would surely be the one Penguin ‘classic’ to have had such an entry.’

I recount this instance in our conversation. He takes a sip of coffee, considers the matter, and says ‘usually impact is belated, whether of trauma or of value. Only in Hollywood films is it love at first sight.’ History is the arbiter of what is classic, not the marketing department.

‘Liking’ is liable to be vapid, in this context.

I mention the bit where Chaudhuri recalls the great poet Seamus Heaney’s appreciation of the Cold War. Punitive regimes were conducive to very good poetry because they generated what Chaudhury here interprets, on behalf of Heaney, to have been ‘exemplary pressure.’

‘Those regimes seemed to become a kind of inverse pastoral for Heaney; enclosed, isolated, and capable, paradoxically, of producing the great artists that the West no longer did.’

What then does Chaudhuri honestly think about the era of our own lives, mostly post-1989?

Somewhat further into the book, in a brilliant chapter entitled ‘The piazza and the car park,’ he makes an en route remark about ‘the sort of ‘great’ poet who’d lost his tenancy in the emptiness of evangelical liberal democracy during globalization.’

This throwaway remark is a great clue to Chaudhari’s identity, as much so as his refusal to take a British passport.

It occurs not-coincidentally in a sizzling (also jovial) recollection of the extremely controversial 2009 election for the Oxford Professor of Poetry, in which Chaudhuri among others mounted a completely credible campaign for the election of Indian poet Arvind Krishna Mehrotra, who in fact won in the sense that no one else was left standing, yet wasn’t elected.

Amit’s point is that Mehrotra would have been a better Oxford Professor of Poetry than a ‘great’ name lost amid ‘the end of history.’ The comment is not meant as an attack on the eventual incumbent Geoffrey Hill, at least not as such. It is an attack on the world order produced by the ‘end of history’ and some of the literature that came out of it. 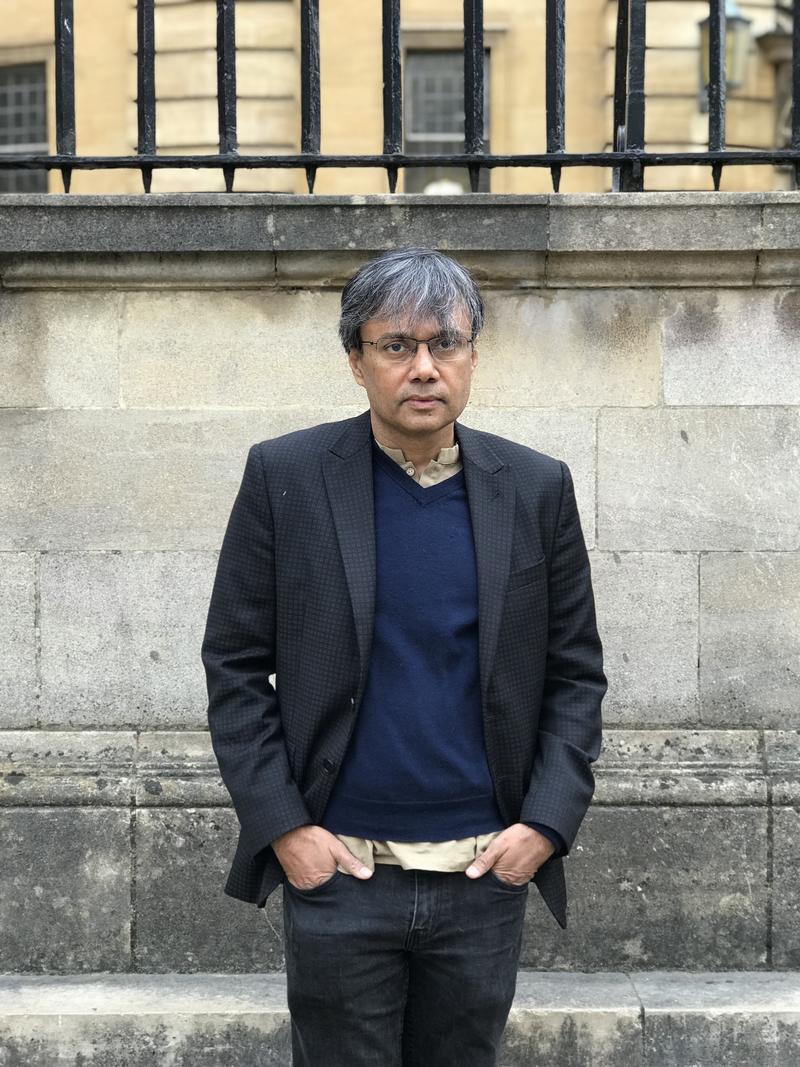 At this point I remember to ask Chaudhuri to recommend three writers outside the traditional Eng. Lit. canon (itself the product of colonialism, notes Chaudhuri in another essay).

Actually he doesn’t do this immediately, coming back to the matter later in our well-over-an-hour discussion.

His initial suggestion is that we all look again at whatever canon we have learned, and see the joy in it where before we might have been led to perceive the gloom. Even Camus wrote about sunshine, he says, although no one knew that while he was alive.

Concerning English literary modernism, he contrasts T.S. Eliot’s ‘these fragments I have shored against my ruins’ (The Wasteland) with D.H. Lawrence’s lack of regret, as Chaudhuri sees it, at the fragmenting of Western culture.

Chaudhuri’s Oxford DPhil at Balliol was on Lawrence, and he remembers the ‘huge impact’ of Sons and Lovers, which he read as an undergraduate reading for a first degree in English Literature at UCL. To this day he is an admirer, but his interest in the joyful, as he puts it, in fact occupies a ‘subterranean lineage’ through modernism, which is so often seen as wrist-slittingly gloomy or nihilistic.

I suggest that possibly Chaudhuri’s ‘dislike’ is proximate to Milan Kundera’s ‘heaviness’, the counterpoint to his novel The Unbearable Lightness of Being. Amit’s market capitalism is Kundera’s kitsch.

There’s a lot of Oxford in the essays, none less so than the piazza of his second essay of the book, The piazza and the car park, which to my general amazement refers to Bonn Square, the tatty bit of Oxford by the bus station. There’s even a photograph of it.

Amit explains that when he came up to Oxford it was a car park. A year later it was a square, or Chaudhuri’s preferred term piazza, which seems ironic. He perceives with great hilarity the incomprehensibly indeterminate nature of the space that still determines this bit of non-descript Oxford, part-taxi rank, occasional market; a sort of post-modern vacuum.

What’s going on here? He says he’s not trying to romanticise the car park. He’s interested mainly in discontinuity. He says, ‘it’s very difficult to remember that it was a car park.’ It becomes an academic exercise to even recall it. This is a metaphor for whole societies, individual lives. Change seeps over the past like an incoming tide. Not only do we forget; we barely perceive the change. In an additional sense this is how we deal with the deaths of loved ones, but the notion of the piazza is also of bazaar or market place. There’s almost nothing Capitalism can’t destroy, while literary prizes are partly the product of frenzied meaninglessness.

I decide to ask him what he means in a particular, to my mind difficult sentence. Anticipating, he self-deprecatingly alludes to ‘one of my various incomprehensible sentences’:

The one indefatigable, modest, self-renewing moral purpose of both creative and critical language is to dismantle, and refuse to confirm, what we already know to be true.

How do we know that ‘what we already know to be true’ really is true? He says, ‘Let me take a really crass example. ‘Africa is warm.’ If I tell you this I reconfirm what you want to hear. Actually, ‘Africa is cold.’ This is where we are as writers. There is no ready-made language to describe today. You have to re-make it, whether a poet, a critic or a creative writer. Everything you’ve heard is only true up to that point.’

On a footnote of pure levity, Chaudhuri reminds me that he missed his matriculation photo at Balliol, and if I look for it he won’t be in it. ‘My mother was with me. We stayed up late the night before watching Richard Burton bickering viciously with Elizabeth Taylor in the [1966] black comedy Who’s afraid of Virginia Woolf. I simply overslept and missed it!’ 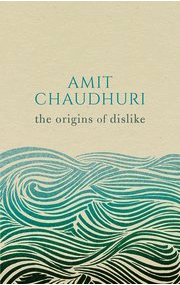