Priest of Nature: The Religious Worlds of Isaac Newton, by Rob Iliffe. (OUP, £22.99)

The Professor of Intellectual History and History of Science at the University of Sussex, Rob Iliffe, knows more about Newton than probably anyone else alive. Here, he's done for Newton what the better biographers of Charles Darwin have done for the pioneer of evolutionary thinking. In other words: if you take on a great scientist who worked in an era of established religion, it is inevitable that they grappled with theology, NOT inevitable that they were indifferent or bemused, in some blank, flat manner like so many scholars writing about them in the 1960s and 70s. The result is a much better understanding of the man and his time. Incidentally, a lot of handsome book with beautiful plates, for a low price by OUP. 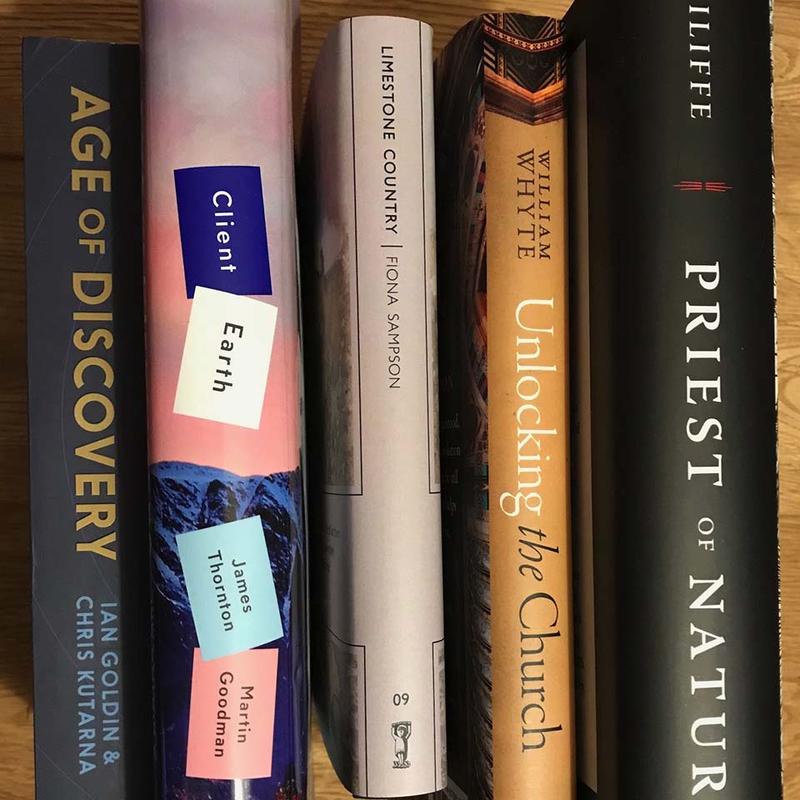 Age of Discovery: Navigating the Storms of Our Second Renaissance, by Ian Goldin and Chris Kutarna. (Bloomsbury, £10.99)

This is a revised paperback of the first edition published a year ago, although the revisions aren't identified. If I had to guess, they have to do with reams of gushing adulation reproduced at the front, even with Breitbart.com cited, 'a fantastic new book.' The authors, one ex-World Bank, the other ex-Boston Consulting Group, both with strong Oxford connections, consider us to be in a great global flourishing tipped with deadly threats, and seek to draw comparisons with Medici-era Florence. You'll have to read it very slowly and decide for yourself, while this reviewer slumps in front of the Director's cut of Waterworld. Actually, the gush is comedic. A chap called Larry Brilliant (the name!) writes, 'A remarkable feat of both history and prophecy.' I'm not sure how he was able to say that, yet.

Boasting an Oxonian-studded field of lawyers, Client Earth has blipped across our radar through this recently published book, to be a paperback early in 2018. The book is inspirational in a hard headed, let's go to work-and-get-real-results sort of way, but it also made me think hard about the most basic, inconvenient truth laid bare throughout, namely that any law is only as good as its enforcement. The EU is conspicuously bad at enforcement. The other inconvenient truth, less examined here but much observed of late in the UK, is that governments are expert at breaking the law. Of course, not exactly like that sounds, but amounting to that. They lose in the High Court and they appeal. Or they act as instructed but woefully. Or they deploy their own lawyers who can keep kicking the can down the road while their opponents run out of treasure and the will to live. Exhibit A: The British government and illegal levels of dirty air due to nitrogen dioxide emissions principally from diesel vehicles. No victory in sight here, despite Thornton and his team 'winning' in court more than once. But there are brilliant cases of victory here, especially in regard to Poland and coal fired power stations. There's a global vision. It's quietly amazing. One of the more significant books of the year.

The super-renowned poet and former Newdigate Prize winner (and MBE -) tackles the sedimentary rock made from the shells and bones of vanished oceans, in four very different places: France, Slovenia, England and Jerusalem. Described as a love letter to a rock, the book brings landscape to life, while binding life to geology. We're all shaped by the landscape, and shape it. Extremely on the pulse of our times, for squeezing the experiential from the immutable, but done with such care and linguistic panache that it may become a touchstone (pun intended!) for this sort of book. Would make a great Christmas read, not too early to consider!

St John's College Professor of Social and Architectural History, and acting President, somehow found time to assemble this gem. A country mile distant from the heavy prose of the Victorian churchmen, Whyte writes nimbly and wittily about the resacralisation of Britain through the vast church building of the 19th century. This activity was never quite distinct from the Tractarian moment of the early 1830s and, contends Whyte, was finally wrought in chapels no less than churches, all of which became alive again to the nuance of architectural forms as conveyors of the sacred, even as now we are all baffled or forgetful or tragically indifferent. One of the observed strengths of Whyte's book is that he doesn't whitewash the 18th century church building that preceded the dazzle of Keble College Chapel and its cousins. It's just that those churches were intended for sermons, whereas theological pluralism and endless rows about ritualism triggered a much broader aesthetic in the wake of John Henry Newman and Co. The author betrays a fascination with the gloomy crypt that goes beyond the normal. In 2017, year of the £1000 iPhone, we judge that to be pretty rock 'n roll.