Packed into the Norrington Room on June 14 were over a hundred people drawn by the celebrated philosopher and former Oxford politics professor John Gray (Exeter, 1968), visiting to discuss and publicise his latest book Seven Types of Atheism (Allen Lane, 2018)

One unexpected outcome, from a public discussion that followed a witty and dizzying tour of the book’s main ideas by the author, was Gray’s note that by far the most influential contemporary atheist is Russian-American writer Ayn Rand (1905-82), not least because she has influenced recent politics. In fact his analysis of Rand is contained in the book, from page 47, and is enthralling.

Rand’s massively popular novel Atlas Shrugged (1957) replaces Nietzsche’s Übermensch with heroic American capitalist John Galt, asserts Gray, adding that she in effect reinserts Christian apocalyptic myth into a Colorado mountain valley enclave. Her views are either extremely rational or completely nuts, depending on your point of view, and she expected her cultic followers to be heavy smokers, as was she. 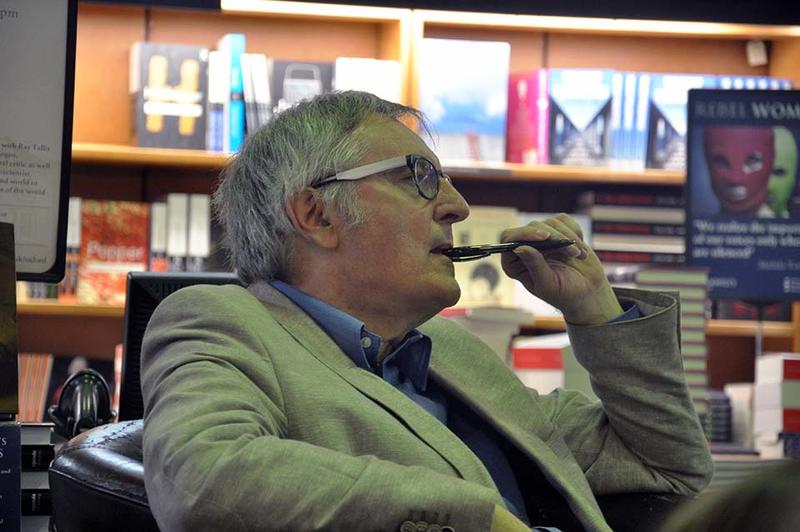 It sounds harmlessly amusing, like a dinner party vignette, but was it, and is it? To his audience, Gray told a funny anecdote about Rand’s cigarette holder, and how when she moved it at a mass get together of devotees, every other cigarette holder in the audience moved in sympathy.

Yet, ‘the maddest ideas are quite often the most influential,’ notes Gray in the book. Mixed up with Christian fundamentalism, Rand inspired the Republican Tea Party movement. We then learn that former Federal Reserve Bank chairman Alan Greenspan, was a Rand follower, and you begin to connect up some dots that appear to march straight into the world financial crisis of 2008, and inevitably on to other stuff.

President Trump, by the time he was mentioned inadvertently in the discussion, appeared to be evidence for the sort of world in which steady, liberal-humanist progress is pretty much a nonsense. Gray wishes it weren’t so but history proves otherwise, and that is his point and one of the implacable themes of this and previous books.

‘Contemporary atheism is a continuation of monotheism by other means,’ he says.

Of the seven different types of atheism that he identifies, the majority are God-surrogates whether entertaining an elevated notion of humanity, science or latterly technology, or even the direct hatred of God even if it isn’t quite worship of the Devil.

He wades rapidly and deeply into the widest imaginable gamut of thinkers, movements and ideologies – from Plato and Lucretius to Hitler and Mao – but only after first making a series of penetrating situational comments about Christianity and how by being global rather than local it seemed superior at the moment that the Roman Emperor turned to it, yet that by turning everything into a matter of belief in Jesus was actually rather parochial and placed violence at the centre of religion.

He defines atheism not as the rejection of religion but as the rejection of a single creator-God, reminding us that the word ‘pagan’ ‘is a Christian invention applied in the early fourth century to those who followed these practices,’ meaning Roman ceremonies and a jumble of other observances, rather than the banefully evangelical posture created by St Paul, the stage upon which world history was bound to create a ‘secular realm’ and from which ‘non-belief’ came to be equated with atheism. It’s not, says Gray. ‘Religion is universal,’ he says, ‘whereas monotheism is a local cult.’

By decentring Christianity so eloquently, he frees up the rest of the book to entertain many atheisms, devoting as little space as possible in the first chapter to the Richard Dawkins model, as Gray sees it, which is no more than a simplistic rejection of an almost Sunday School/kindergarten rendering of Christianity. 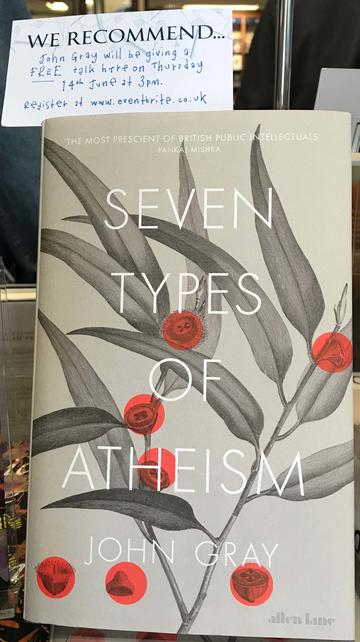 Atheism is much more interesting and ultimately liberating, argues Gray. Thus he allows the book to progress rapidly as a tour of atheisms, all of them essentially failed reversals of the flawed monotheism against which they rebelled. There’s the positivist Auguste Comte; there’s utilitarian John Stuart Mill, a huge subject of Gray’s earlier career as a scholar, here condensed to a few pages as a failure; there are the racist leaders of the Enlightenment and their misplaced faith in a self-styled reason – including Voltaire (not his real name) – and on to evangelical liberalism, modern forms of Gnosticism, Bolshevism and Maoism.

Chapter 5, Gray conceded at his talk in Blackwell’s, is tricky in that the three ‘God-haters’ sketched there, the Marquis de Sade, Dostoyevsky via his character Ivan Karamazov, and William Empson, in a weird way erect a God in order to tear she/he/it down. There is a generosity in the telling and with Empson, an academic cast into wilderness by Cambridge for merely prurient reasons that today seem ridiculous, a character for whom Gray expresses undisguised respect, perhaps echoing his own decision ultimately to leave an academic Chair at the LSE in 2008 for a life of greater independence.

It’s from Empson that the reader is finally vaulted into the last two chapters, where the author finds himself most sympathetic, but without trying to convince, or God forbid create a movement of his own.

Religion cannot be banished by science, concludes Gray, because it tends an innate need for meaning in humans. Secondly, science cannot be the basis for morality and indeed, as it advances rapidly through technology it is neither good nor bad in itself, but at the behest of human weaknesses that change little down the ages. If the title of the book led you to assume that what’s on offer is a repudiation of religion as you knew it, think again; if anything it ends in eastern mysticism, or at least in circles rather than straight or ascending straight lines. ‘If you want to understand atheism and religion, you must forget the popular notion that they are opposites.’

In some ways the distillation of a remarkable career as a thinker, Gray’s book, handsome in grey boards lined with red and at just 157 pages, remains inherently approachable and free of jargon, in effect an extended essay and perhaps controversially without an index. Yet there are almost no minds alive today who could so gracefully have covered so much terrain and so easily, to re-shape what most people assume to be the meaning of atheism and still more religion. It’s probably the most important book to read in 2018 and that message appears to have already communicated itself to a wide audience, the publishers having already run out four impressions in the first three weeks of publication.