PICKING UP A NOBEL 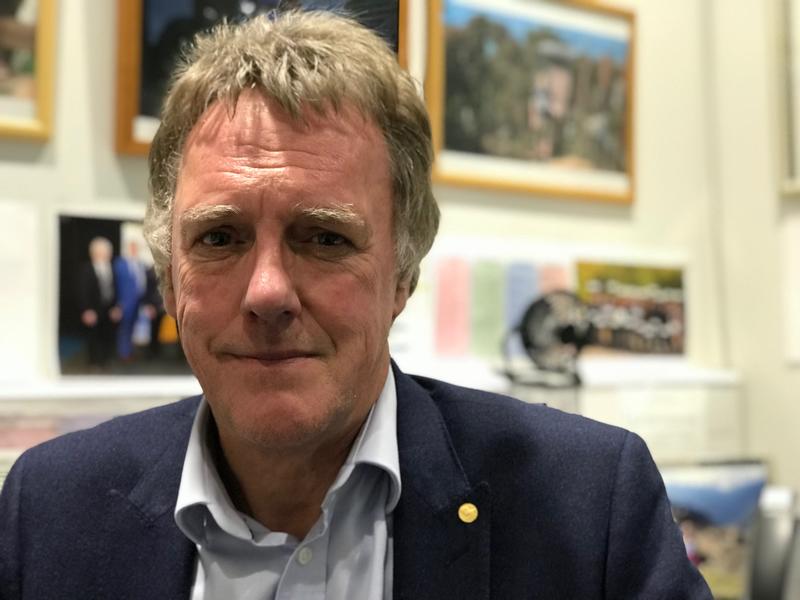 PICKING UP A NOBEL

He says that the whole experience was a very positive one, but the 200 speaker invitations that landed on his desk shortly after have required him to be ‘very selective.’ ‘I own my destiny,’ he says. ‘I have two roles not one and it requires me to be very well organised.’

Professor Ratcliffe is referring to the fact that he is both Director for the Target Discovery Institute within the Nuffield Department of Medicine at Oxford University, and Director of Clinical Research at the Francis Crick Institute, London.

He received the call from the Nobel Committee in October 2019. It came directly from Sweden and was ‘out of the blue.’

‘I was delighted, honoured and a little bit surprised, but I still wasn’t allowed to tell anyone else until the actual announcement had been made an hour later.’

The award was made to three individuals for research that in Professor Ratcliffe’s case led goes back to 1978 when he moved to Oxford and trained in renal medicine with a particular focus on renal oxygenation.

One of the outcomes of the Nobel prize is that Professor Ratcliffe has been able to shine a renewed spotlight on the pioneering work of Oxford researcher Mabel P. Fitzgerald (1872-1973).

Mabel stormed a path in the area of how human breathing and blood react to high altitude, travelling to Pikes Peak in Colorado in 1911 with the then Reader in Physiology at Oxford John Scott Haldane, in whose memory a special lecture is now given annually in Oxford.

Fitzgerald’s work in this area was largely forgotten during her own life until age 100 she was awarded an honorary MA from Oxford. 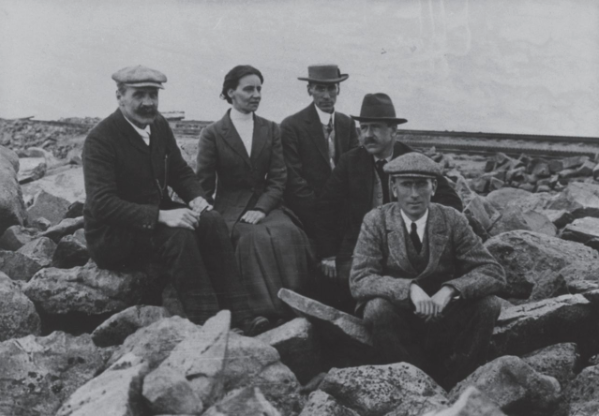 At that time and until her death the following year, she lived at 12 Crick Road in North Oxford, having moved back to Oxford in 1930. Her career began studying chemistry and biology at Oxford in 1896-99, when women were not allowed to take degrees even though they could study for them.

In a nice coda, Professor Ratcliffe says that of his graduate research students today, more than half are women, a clear sign of change.

The focal point of the sumptuous Nobel banquet thrown by the Swedish royal family, at least for recipients of the world-renowned prize, is the three-minute speech they make at the end of a five hour long sit-down.

Professor Ratcliffe honoured Mabel Fitzgerald in his Nobel Public lecture, as well as making it an important part of his Haldane Lecture, but what he remembers is how difficult it was to stick to three minutes.

‘You rehearse it and you rehearse it. But in the delivery you slow down, inevitably, owing to the immensity of the room and the size of the audience.’

He says that of the six speeches in 2019 – one more than normal because two literature prizes were given – most ran over by about 30 seconds to a minute, but perhaps it didn’t matter.

Because the speech comes at the end, you can’t give in and enjoy yourself too much, he recalls. ‘There was a lot of champagne but I didn’t drink much!’

Seated away from the two other recipients of the same award, opposite a member of the Swedish Royal family and next to the wife of the Speaker of the Swedish Parliament and the wife of another physiologist, with family members close around, he says that the table was so wide that you couldn’t talk across it, partly on account of 1,400 people. ‘They make an awful lot of noise.’

The banquet was interspersed with beautiful singing which ensured some interludes. Perhaps the biggest reason not to overindulge is that guests are told not to visit the bathroom if possible – the protocol is to not stand up unless the King of Sweden has stood up first. This apparently caused some disquiet among some recipients, not surprisingly. 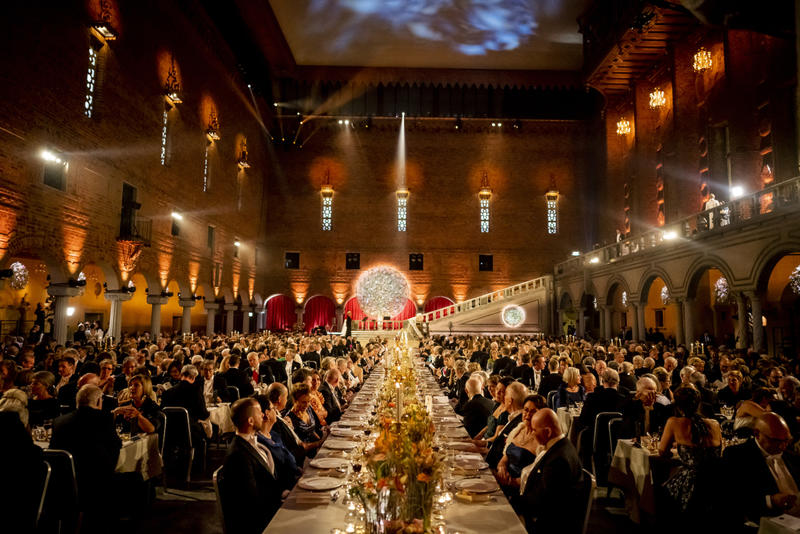 Professor Ratcliffe’s wife and four children were all welcomed, but he chuckles about also gaining access to the banquet for his new-born granddaughter Beth, aged just seven weeks at the time. ‘We had to negotiate that but my wife insisted and they relented,’ he says. ‘Perhaps this was the youngest person to ever grace the Nobel banquet?’

Turning the clock back, Professor Ratcliffe’s work at Oxford properly began when in 1989 he founded a new laboratory in Oxford at the Weatherall Institute of Molecular Medicine, obtaining a Senior Fellowship from the Wellcome Trust to work on cellular oxygen sensing pathways.

In particular, he explored the regulation of erythropoietin, a hormone responsible for stimulating the production of red blood cells, known to be turned on in kidney cells following oxygen deprivation.

It was this field of research that led to Professor Ratcliffe winning the prize alongside William G Kaelin Jr of Harvard University and Gregg L Semenza of Johns Hopkins University. Together, they discovered the key mechanisms that our cells use to detect and respond to low oxygen levels, known as ‘hypoxia.’

‘When our blood has too little oxygen, our kidneys send signals to boost red blood cell production to carry more oxygen.’

What Professor Ratcliffe is credited with doing is discovering that the mechanism underlying the kidneys’ response for detecting and responding to hypoxia, that has subsequently been found in all our cells, is universal.

‘What we didn’t realise at first was how ubiquitous the ability to sense oxygen was among cells,’ says Professor Ratcliffe.

Fitzgerald not only contributed to this with her research concerning how the human body reacts to high altitude through haematological and respiratory adaptation.

Professor Ratcliffe notes in particular that she established that these adaptations occur even at moderate altitudes. ‘She demonstrated the sensitivity of the body to oxygen sensing; that it wasn’t some gross compromise of metabolism but a physiologically exquisitely poised system.’

It turns out that all cells, not just a handful producing erythropoietin, have the ability to react to low oxygen. What Professor Ratcliffe THEN did was to uncover a detailed molecular chain of events that cells use to sense oxygen.

The end point is that most human diseases are complicated by low oxygen, including heart disease and anaemia. New treatments are emerging from these insights.

Turning back to the Nobel Prize, he says that there is a Nobel Museum in Stockholm, and for a year after the award each winner gets to showcase some items, a few of which might become permanent exhibits. He says that there are some items referencing Fitzgerald, and that the Nobel Committee were very receptive since the position of women in science is still a major concern, owing to the fact that they are unequally represented.

‘It was a fantastic family holiday and everyone was made very welcome,’ he says, in summary – but noting that he missed the famous chance to have Nobel ‘singers’ serenade him in bed owing to having to return to the UK before the quirky ceremony could take place.

Asked how he wants to ‘use’ the Nobel Prize at Oxford and beyond, he notes only that the concept of the ‘physician scientist’ is misunderstood and even denigrated in certain circles, but he hopes that being one and winning a Nobel might change that stance.

‘I did a lot of medicine – 30 years at the John Radcliffe on the acute take rota. That’s something I am proud of and it’s NOT unusual, to be qualified in medicine and doing research, but to practice and continue to practice while doing research. I do hope to inspire people in that regard. There can be an element of suspicion around the physician scientist. Typically, people cleave to practice or cleave to theory. In my experience it has worked to pursue both. I did so-called ‘front door medicine’ and still won a Nobel.’

From 1907 to 1913, Haldane was Reader in Physiology at Oxford. In 1911, along with C. G Douglas, with whom he worked in the Oxford Laboratory of Physiology, Haldane led an expedition to Pike’s Peak, Colorado, to examine the effects of low atmospheric pressure on respiration. They stayed at the summit house of Pike’s Peak (14,110 feet above sea level), in which they built a laboratory and investigated the process of acclimatisation of breathing to high altitude oxygen levels. Pioneering Scientist Mabel Fitzgerald was also a member of this expedition. Their discoveries revolutionised current ideas about respiration.

The Nobel Prize in Physiology or Medicine 2019

The Nobel Prize in Physiology or Medicine 2019

Prize motivation: "for their discoveries of how cells sense and adapt to oxygen availability."