James Bakewell talks to Oxford scientists at the forefront of NQIT, the UK’s Quantum Computing Technology Hub, who aim to harness the power of this extraordinary new technology to solve otherwise intractable problems with real-world benefits. 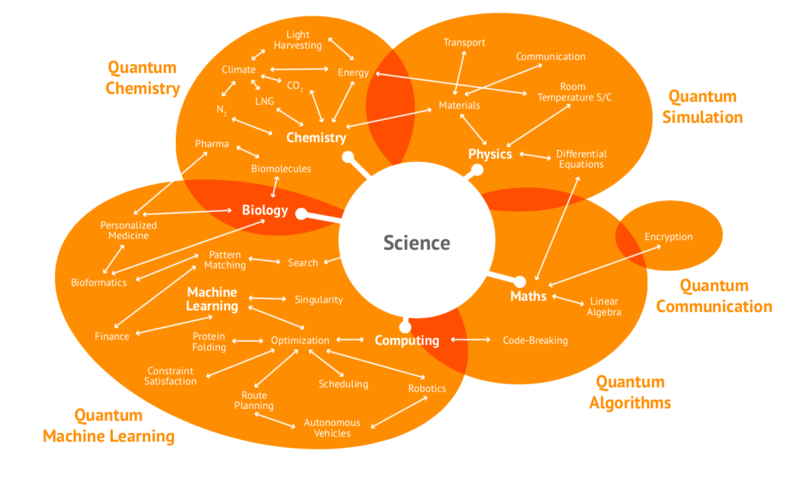 Perhaps more than any other nascent technology, the ongoing development of quantum computers could have profound implications on many aspects of our lives. Researchers at the University of Oxford are leading the charge to turn this potential into reality.

Humans are ceaselessly inventive, yet the methods we use to develop many new technologies essentially boil down to expensive and time-consuming trial and error. Every year, for instance, several dozen new drugs will be licensed for use by patients, but for each of these successes some 5,000–10,000 candidate drugs will have fallen by the wayside.

According to The Pharmaceutical Journal, it can take around 12 years for a company to research and develop a new drug to the point where it can be sold, all at a cost of around £1.15 billion. What if there was a way to make this process more efficient? What if there was a way to identify, simulate and build a drug molecule or compound so that it was right first time?

Supercomputers are currently used to assist in this process, but once a problem reaches a certain scale of complexity, they hit a brick wall. Quantum computers, on the other hand, could be able to crunch this data with relative ease.

Globally, this promise, which could also have profound implications for numerous fields of inquiry, has driven billions of dollars of public and private investment. In the UK, the University of Oxford – where 38 separate research teams with a total of around 200 researchers are beavering away on the technology – is leading the race to construct the world’s first fully functioning quantum computer.

For the moment the potential of quantum computing is exactly that – potential. However, according to Simon Benjamin, Professor of Quantum Technologies at the University’s Department of Materials, ‘We do have some tantalising examples of problems that we do know are definitely hard for conventional computers.’

One example of such a problem is prime factorising – determining the prime numbers that can be multiplied to make a given number. What makes prime factorising so difficult for conventional computers – and the reason it underlies the security of many of the cryptographic algorithms used for online financial transactions – is that the number of possible outcomes scales exponentially as a digit is added to the given number.

Central to the ability of a quantum computer to cope with these kinds of problems is the quantum bit, or qubit. Conventional computers use bits – single pieces of information that can exist in one of two states, ‘1’ or ‘0’ – to describe things. Everything from text to music to images can be represented by a stream of these bits, which can be manipulated and stored in a variety of different ways.

By contrast, qubits can represent numerous combinations of 1 and 0 simultaneously when in put into a state known as superposition. Further, pairs of qubits can exist in a single quantum state – a poorly understood phenomenon (even Einstein described it as ‘spooky’) known as entanglement. The state of one qubit cannot be changed without affecting the state of its entangled partner.

All of this means that while doubling the number of bits in a conventional computer doubles its processing power, adding extra qubits to a quantum computer produces an exponential increase in its ability to handle data. Indeed, a machine with just 50 qubits could be able to outperform the most advanced supercomputers currently in existence in tasks such as prime factorising.

The final results of a quantum calculation reveal themselves when the qubits are measured, which causes their state of superposition to collapse to either a 1 or a 0.  However, qubits in superposition are extremely sensitive to external stimuli, meaning that the slightest disturbance can cause them to collapse before their job has been done – introducing errors into the calculations being carried out. Great pains must therefore be taken to isolate them from the environment.

Owing in part to this requirement, adding extra qubits to a system is a significant engineering challenge, as is getting them to talk to one another. As a result, numerous approaches are being taken to build quantum computers that strike a balance between economics, practicality of manufacture, and reducing errors.

A research group overseen by Peter Leek, Research Fellow at Oxford’s Clarendon Laboratory, is developing ways of producing qubits using circuits made from superconductors (materials with zero resistance to the flow of electricity at temperatures close to absolute zero or -273°C) and components known as Josephson junctions.

Quite how this works is a bit of a puzzle unless you’re an undergraduate physicist. Leek says:

‘Do I tell the truth, or do I give an explanation that people can get their heads around? It’s hard to do both at the same time.’

It could be said that such superconducting loops create a superposition of states by allowing electrical current to flow clockwise and anticlockwise simultaneously, but that wouldn’t be strictly correct. According to Leek, the important thing to note is that ‘when you take electric circuit elements down to very low temperatures, so there’s very little energy in them, quantum mechanics take hold’.

Despite being very difficult to explain properly without a whiteboard and a solid grasp of physics, superconducting circuits have a key advantage. Because they are based on technology that is reasonably similar to that used to produce conventional computers, it could be simpler (compared with other methods for making quantum computers) to produce machines with large numbers of qubits. Leek says: ‘Big companies such as IBM, Intel and Google have latched on to it as a technology they could scale well.’ 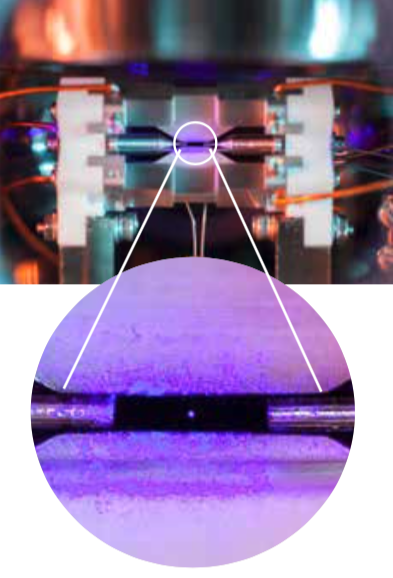 ‘Blade’ ion trap in an ultra-high vacuum system. If you look closely, you can see a single strontium ion in the centre of the trap, between the tips of the two ‘needle’ electrodes separated by 2.3mm. This is an actual photo of ion and trap, not a montage. A long camera exposure time was used to capture the faint fluorescence from the single ion.

‘Blade’ ion trap in an ultra-high vacuum system. If you look closely, you can see a single strontium ion in the centre of the trap, between the tips of the two ‘needle’ electrodes separated by 2.3mm. This is an actual photo of ion and trap, not a montage. A long camera exposure time was used to capture the faint fluorescence from the single ion.

Despite these advances, the qubits produced using superconducting circuits are more error-prone than their cousins – those formed with ion traps. At Oxford, the latter are being developed by a group led by Professors David Lucas and Andrew Steane.

Ion traps may be leading-edge technology, but there’s something almost Victorian in their appearance – lots of polished metal and nuts and bolts. As the name suggests, they employ ions (atoms that have had an electron removed so that they are positively charged) as qubits. These ions are held in place by an electric field and can be manipulated with what Lucas describes as ‘exquisite precision’ using a laser. They are encased in vacuum chambers that serve to protect them from outside interference.

According to Lucas, this approach has a number of benefits. The qubits are well shielded, meaning they can be held in superposition for extended periods of time (for at least 50 seconds). Further, Lucas’ qubits are able to work together effectively. Logic gates (the basic building blocks that enable conventional computers to process data) created by his group from entangled pairs of qubits behave with 99.9% precision – currently a record achieved only by ion trap methods.

A fidelity of 99.9% is a significant advance, but it does mean that, according to the laws of probability, something will go wrong one time in a thousand. By contrast, conventional transistors almost never fail to behave exactly as they’re supposed to.

Benjamin says: ‘It’s an enormous gap and it’s not clear that it can ever be closed by better engineering.’ He and his group are looking at ways to work with so-called ‘noisy’ quantum computers.

But what if you want a quantum computer that does exactly as it’s told? The answer to this, according to Benjamin, might be to take inspiration from how conventional computers work. In a hard drive, for instance, 1s and 0s are each represented by many magnetic particles pointing either to the left or to the right. If one particle goes rogue, it’s not the end of the world because its partners will still be pointing in the right way and data will still be able to be read.

Benjamin continues: ‘But in quantum computers, we aren’t doing that. We’re using an individual entity. A device may have a lot of qubits, but each of them is doing a separate job.’

To emulate this robustness through numbers, a quantum error correcting code could be employed, whereby a whole bunch of qubits work together to do the job of one – a so-called logical qubit. Benjamin continues: ‘As long as you check every so often, you can find the qubits that have gone wonky and fix them using the state stored in the qubits that haven’t gone wrong.’ The downside to this approach? It might take 1000 qubits to create one perfectly behaved logical qubit. By contrast, one of the largest quantum computer chips currently under development – by Google – has 72 qubits, and it is currently unclear how well these work together.

The challenge of adding extra qubits to a quantum computer is mostly one of engineering, and it is quite possible that meaningful quantum computers will be unveiled over the coming decade. Only then will we be able to see what they can really do.

If the promise delivers as hoped, incurable medical conditions could become a thing of the past; strong, lightweight materials could be produced cheaply; and artificial intelligence capable of adapting and learning may become commonplace.

Quantum everything? Steering the way between overstating the potential benefits of quantum computing and too much caution about the challenges, it is worth noting that quantum technologies in general are advancing rapidly. With the commitment of the UK government to establish a National Quantum Computing Centre, and the ongoing work of our scientists and industry partners, the UK will continue to accelerate progress towards a quantum computer, develop a new quantum computing sector and be at the forefront of this global revolution.