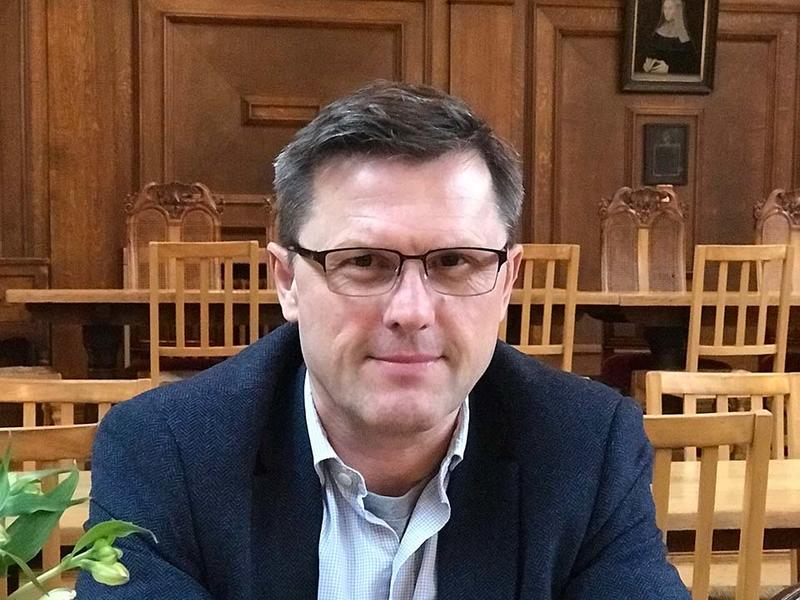 When we meet at Lady Margaret Hall for lunch, Rob Iliffe, Professor of the History of Science and Professorial Fellow at Linacre, has just walked across the University Parks from delivering a history of science lecture on Darwin and eugenics, attended by medics and chemists. In Hilary Term they attend Part 2, on the philosophy of science, offered by Simon Saunders, Oxford’s Professor of the Philosophy of Physics.

A historian lecturing to medics? It’s a reminder just how much Oxford has changed, from faculties feeling a bit walled-off to a much merrier cross-fertilization, although in this instance the lecture series has a long lineage.

Iliffe himself came to Oxford in 2016 from the University of Sussex, where he was Professor of Intellectual History and the History of Science. It’s not controversial to say that Oxford hasn’t previously done cultural and intellectual history the way America teaches it, when undergraduates attend a survey class that will go from Descartes to Darwin in a few nimble leaps. But what has changed in Oxford and many others of the UK’s history departments is a much broader historiographical appreciation of how ideas are embedded in life. You can isolate a great brain or a great idea, but it will be at the cost of broader insights.

While we’re barely beginning to nibble our potatoes, Iliffe says that historians of science have long been fascinated by the relation between Newton's scientific and religious beliefs, but that they had always struggled to show how they might be related. Indeed, earlier in his career Iliffe wrote a series of articles pointing out that there was very little in common between the different domains of Newton's research, arguing that historians 'had placed half-baked and anachronistic, ‘coherentist’ schemes on Newton’s work.’

In particular – this is a journalistic simplification of course, but also Iliffe’s own journey – both contemporaries of Newton and subsequent commentators have tended to elevate his scientific genius while brushing over or actually suppressing the great pile of religious papers that he wrote over a long career.

In part because no one had ready access to the archival materials until recently, Iliffe points out, the religious stuff —we’re talking well over two million words about prophecy alone— was dismissed as dotage material or as a hobby.  It was always held at a suitable distance from the Newton who was the author of Philosophiæ Naturalis Principia Mathematica (1687), the man who created calculus, classical mechanics, and the laws of motion and universal gravitation. He was also twice an MP in Parliament, knighted in 1705 by Queen Anne for his services to the state; President of the Royal Society, and Warden and Master of the Royal Mint for over three decades. The Establishment Newton, if you like.

Iliffe, who evidently isn’t afraid to tread where angels fear, struck off in a very different direction, spending months as a young doctoral student deciphering barely legible Latin scribbles, often scored through or self-redacted by Newton and captured on six reels of ominously thick micro-film. They covered Newton’s religious writings. Iliffe notes that when he began, only two other scholars in the field had consulted the material, and neither at any great length.

‘These were very difficult papers, but I was attracted to the challenge. I wanted to look at it from the bottom up, without preconceived ideas about how his religious writings were connected to his work on mathematics, on church history, on prophecy and on alchemy.  For a long time I thought: there’s no connection. You can try - as some historians did - to account for all of it by saying, “he sought truth in everything he did.” OK great! Thank you very much. But we needed to describe in detail what he did in his religious work before we could decide whether and in what way his different areas of research were related.’

In all sorts of ways this was a brave move. Iliffe had already scrapped six months of difficult work on Roman Catholicism and natural philosophy in 17th century England, having arrived at an interesting group of people but without any guiding thread.

‘Then I shifted to working on anti-Catholicism. I read Richard Westfall’s biography of Newton, Never at Rest, and suddenly realized how much Newton's deep anti-Catholicism permeated all his religious writings.’

That insight informed the arduous interrogation of the microfilm reels at Cambridge.

‘I didn’t want to end up saying, “Oh, how wonderful that he was interested in these things…END.” What struck me was the sheer seriousness with which Newton carried out these studies, which matched the devotion he gave to science and mathematics.  I was also increasingly aware of the fact that he made these inquiries quite early on in his career, whereas the impression given by contemporaries, and by subsequent commentators, was that the religious stuff was late in his life and was of a lesser quality than his more serious interests. It was not peripheral. It was absolutely central to who Newton was.’ 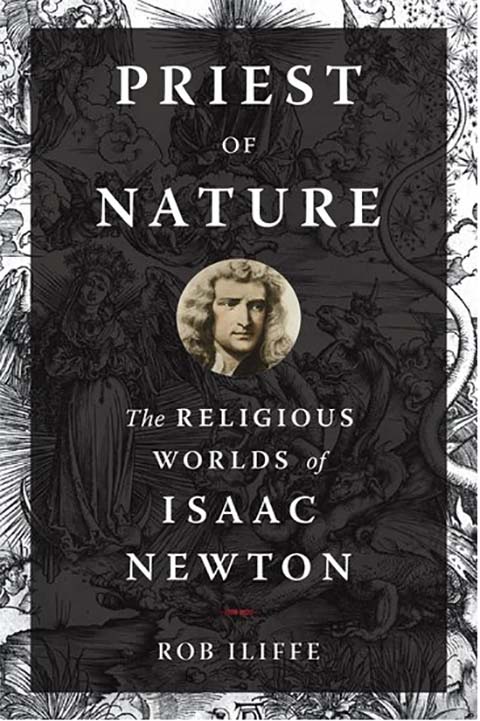 This doctoral work was the first foray into research that is now brought to fruition in Priest of Nature: The Religious Worlds of Isaac Newton, just published by Oxford University Press.

With lunch eaten, I want to hop to the conclusions, saying half-seriously that Newton reminds me of Charles Darwin, whose sense of the sacred was very strong and who doubted and dreaded some of the implications of evolution.

But there is no easy punchline for Newton. One of the main points Iliffe makes is that in seeking to understand what Newton was doing - and who he was - we have to drop our own assumptions about science and religion. Newton's seventeenth century world view did not see the two pursuits as mortal enemies, the one crazy emotion and ‘irrational’ and the other clinical and ‘rational’. Rather, like most of his contemporaries, he believed that investigating the works of God was both a religious duty and a rational enterprise, and he was convinced that the Bible could be decoded with a pure heart and the right set of techniques.

The other thing we discover in Priest of Nature is that Newton's religious devotion led him to extremely, if covertly, heterodox religious beliefs. He would get very upset when more worldly friends would make jokes about religion; but equally, he refused to take Anglican orders and required a special dispensation from the King to allow him to keep both his Trinity fellowship and his position as Lucasian Professor of Mathematics at Cambridge.

In secret, he pursued a pronouncedly anti-Catholic position that in one sense confirmed him a good merry Protestant; in another it marked him out as a true and serrated-edge Reformer, determined to simplify religion to its barest essentials. This led him to reject the idea of the Trinity (God as Father, Son and Holy Spirit) and he quickly came to the belief that it was one of the earliest, but certainly the most horrifying corruptions of Christianity.

These views were socially and institutionally awkward in all sorts of ways, not least because of Newton's fellowship of Cambridge's richest college, Trinity. The clue's in the name, as they say. It is the College of the Holy and Undivided Trinity.

Despite his aversion to popery, at the centre of Newton’s emergent world view was a commitment to religious liberty and to political toleration. The values of free rational enquiry lay at the heart of his religious and scientific worlds and it is the similarity of the ethical values underlying his research in these areas that allows us to see connections between them.

Recognising that religious debate is unavoidable in 17th century English history is not the same thing as making it your thing, as a scholar. I ask Iliffe how it happened.

‘I was primarily interested in philosophy of physics and came to study the history of the physical sciences largely by chance. Reading Newton's technical theological works over many years was a difficult exercise, and I had no guide or serious secondary literature to help me. However, coming to terms not only with Newton’s alien mindset, but also with the views of his contemporaries, was in many respects great fun, and exactly the sort of intellectual challenge that appealed to me.

In the last two decades Newton’s religious writings have been transcribed and published online as part of the Newton Project. These materials have been pored over by scholars working in the lively sub-discipline that examines the historical relations between religion and science.

Now let loose on the biscuit tin in the SCR, we go back to Darwin. Is there a case for a dual biography of Darwin and Newton, I venture?

Iliffe says it would work very well. They were both steeped in a Cambridge pedagogical system that was based on the tradition of natural theology. Darwin’s family had radical members, especially his grandfather Erasmus, and his early religious outlook precluded Trinitarian theology. In that regard of course, he shared similar convictions to Newton. Although they differed over the truth of the Bible, they shared a disdain for convoluted and incomprehensible doctrine that could not be supported by evidence.

They were also deeply concerned about upsetting the social order around them, the Establishment on whose patronage their advancement rested. Newton published almost nothing about his religious views, while for various reasons, Darwin waited almost two decades to publish his theory of evolution by natural selection. Iliffe adds: ‘I’d note how intellectually daring both of them were in their inquiries, even if they were in other respects cautious.’ Darwin also in some ways modeled himself on Newton, notes Iliffe.

‘Darwin wanted his theory to be on a par with Newton’s theory of universal gravitation, and to do for the biological sciences what Newton had done for physics and astronomy. Their theories were supertheories that seemed to explain everything within their respective domains.  For Newton, Universal Gravitation was true, but the discovery of its physical causes would require many further generations of research. For Darwin, speciation was the result of Evolution by Natural Selection, but he was aware that his understanding of reproduction was inadequate for explaining the physical cause of variation within species.’

Both were devoted to their science in extraordinary ways. and both of them isolated themselves from society in order to devote themselves to their work.  In some ways, the biggest difference between them, laughs Iliffe, is that Darwin married having concluded that a wife would be a more fulfilling companion than a dog, while Newton led the life of a 'spiritual virgin' and remained a confirmed bachelor.

Rob Iliffe is Professor of History of Science at Oxford, Co-Director of the Oxford Centre for the History of Science, Medicine and Technology, and a General Editor of the Newton Project.  He is the author of A Very Short Introduction to Newton (OUP 2007) and Priest of Nature: the Religious Worlds of Isaac Newton, (OUP 2017), and co-editor of The Cambridge Companion to Isaac Newton, 2nd ed. (CUP, 2016). He has published widely on topics in the history of early modern and Enlightenment science, and particularly on historical interactions between science and religion, scientific voyages of discovery, the life and work of Isaac Newton, the development of ideas about scientific genius and scientific creativity, and the role of scientific instruments in scientific innovation. Topics being studied by Professor Iliffe's current DPhil students include the circulation of utopian ideas within Europe from 1500-1700; Samuel Hartlib and English colonialism; the chronological research of Isaac Newton; the scientific and religious thought of Kang Youwei; the geological and ceramic projects of Alexandre Brongniart; the development of Virtual Reality technology in the United States 1965-2005.