When I was asked to produce a sculpture of St. Edmund, to celebrate the fiftieth anniversary of St. Edmund Hall receiving its royal charter, I knew it would be a delight.  I had a personal connection with the Hall, and the project also captivated my interest in other ways.

Making a sculpture of a figure from the past is like writing an historical novel. You gather as many facts as are available; form an opinion about the possible appearance and personality of the person you are dealing with, and use a good deal of imagination to produce an image that is necessarily subjective.

Andrew the Fisherman. A sculpture of St. Andrew casting his net across two 3m. high pillars in front of the Minster Church in Plymouth.

We know little of Edmund’s appearance except that he was bearded and would, because of his extreme asceticism, have been emaciated. The earliest representation of him, in St. Michael’s Church, was produced some fifty years after his death, and is in any case (like others of him) a typical, stylised representation that could be any bishop at almost any time. He is standing, in bishop’s clothing, with his hand raised in benediction. I wished to move away from this image to reveal the man as I saw him.

For, in contrast to his appearance, we know a great deal about the Saint’s personality because of the detailed attestations of his contemporaries, which were a necessary part of the canonisation procedure.  He was an ascetic, overburdened by a sense of duty to both God and man. He gave way to the importunities of others, but did not do so simply as a matter of course, and was sufficiently strong of personality to stand up to both barons and king to settle a dispute that was heading in the direction of civil war. He was charismatic, and his preaching drove many to join the crusades or enter the cloister. Therefore I had the interesting task of presenting a considerate yet strong personality within a body wasted away by extreme asceticism. In addition to that, I wanted to represent the frustrated scholar; the man who sent his servant to the monks who had come to ask him to become archbishop, with the message, “go away, I’m reading”!  What Edmund really seemed to enjoy most was to read, but enjoyment was not a priority for him. So I decided that it would be an act of kindness to allow him to read at last, in front of the church where he had the Lady Chapel constructed; the cross which he brandished whilst preaching, and which was so important to him, pushed back a little from the forefront of consciousness, lying beneath his right hand as an integral but not dominant part of the design. I also wished to present a life-sized Edmund, sitting and reading in a position where he could blend in with and be lost amongst the people who would come to surround him.  This seemed fitting for a man who avoided the trappings of authority, refusing to wear the mitre and gloves of his office; and would  make the sculpture a symbol of the friendliness that is such an important part of the Hall’s ambience. 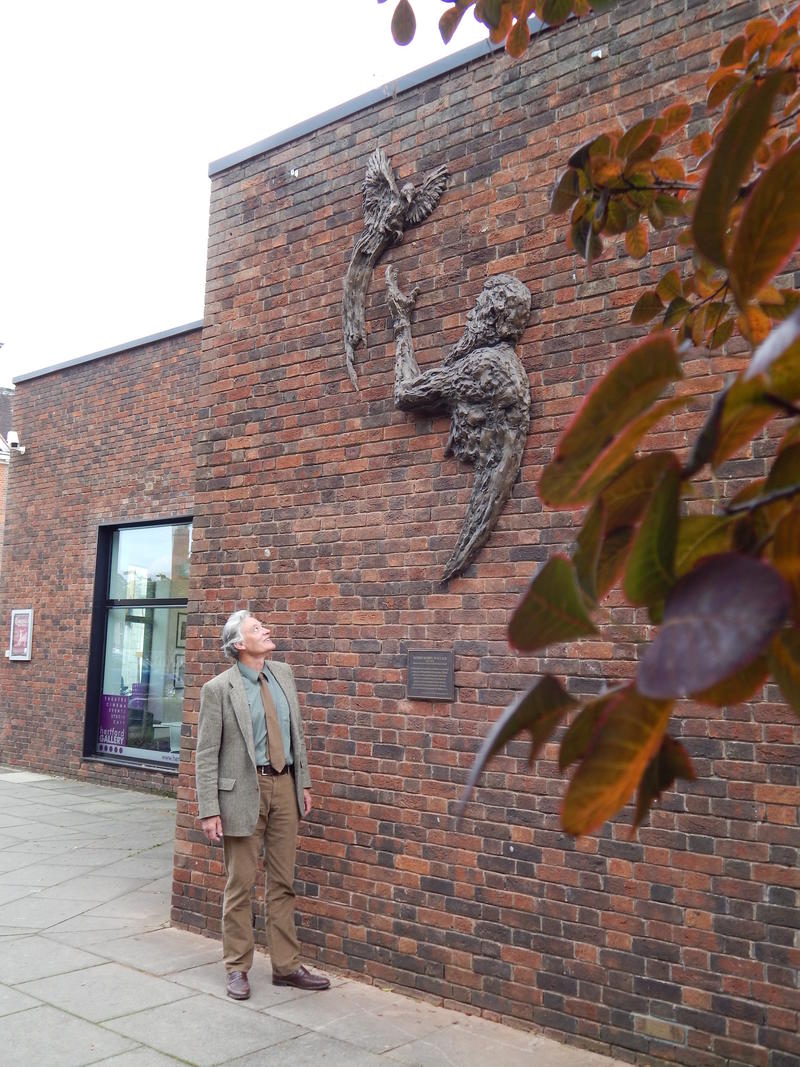 Some years on, the approach I took to this sculpture is still representative of how I  work, but it is one which does not fit easily with today's art establishment, which is still suffering from the ‘French Theory’ that led to post-modernism. When I was at the Hall in the late 1960s,  this was a new philosophy,  about to assault the art world and much of academia. The myth it propagated has since been  exploded by such eminent Oxford academics as John Carey and Roy Harris, but it persists obdurately in the art-world, where, as Harris explains, its continuation  is necessary to justify the decisions curators have taken, and to protect their jobs. Its effect on a sculptor  is insignificant in private commissions, or in public ones such as that at Teddy Hall, where the client knows what he likes and what he wants. The problem arises with commissions where the money is there but not the ideas, as is increasingly the case where artwork is part of a Section 106 Agreement in connection with development. With no idea of what it is after, the brief becomes wordy, turgid and unintelligible. One finds oneself in a bureaucratic system, where an application becomes a matter of ticking boxes,  the two major ones being Health & Safety, and fashionability.   Fashion, the product of vested interest and the desire to conform, now determines much public art, which looks set to remain stuck in the '60s  for all eternity.

When the avant garde follows fashion, it is time for artists to reflect on the Dutch saying which MRD Foot used to conclude his book Resistance, “only dead fishes float down the stream, live ones swim against it.”

Based in Hertfordshire and the Ariège Pyrenees in France, Rodney (St Edmund Hall, 1967), completed St Edmund for the 50th anniversary of the Royal Charter in 2008. One of his specialities is ecclesiastical sculpture which means swimming upstream in today’s art world.