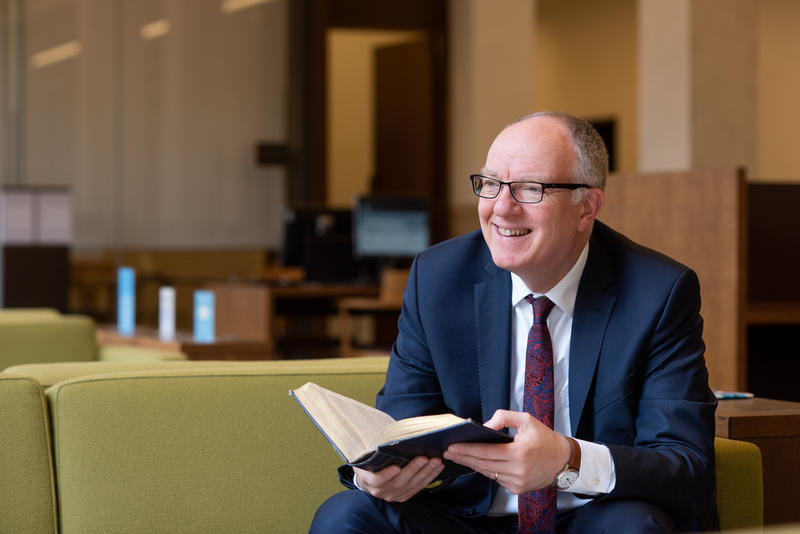 Sarah Whitebloom profiles the man who oversees the Bodleian, glimpsing the future role of great libraries at the same time

Richard Ovenden could not be more assiduous or more conscious of the role with which he has been entrusted: chief custodian of the Bodleian, Oxford’s internationally-renowned library, and its precious contents. An acclaimed author in his own right, quietly-spoken Richard could have been sent from librarian central casting. In fact, though, he has spent his working lifetime unknowingly training to lead one of the world’s great libraries.  In the UK, only the British Library is larger than the Bodleian.

It is such an institution, it has a nickname – the Bod – and its librarian is Bodley’s Librarian [after the founder Thomas Bodley]. In more than four centuries, just 25 people have been entrusted with this role and they have accumulated a store of more than 13 million printed items – including rare and holy texts, letters from kings, poets, Nobel-prizewinning scientists, and politicians, statements of execution and laundry and an awful lot of books. In a cyber age, where screens often replace the printed word, some may see the Bod as dated. They have not met Richard.

Forget everything you ever thought about libraries and librarians. Richard is a passionate believer and advocate of the library and the archive and their essential role in society. Far from the clichés about stacking shelves, he insists the librarian is a defender against ignorance and tyranny. He declares, ‘One of the essentials of a democratic society is the preservation of knowledge….librarians, museum curators, archivists, we’re custodians of knowledge and in the front line of defence of the open society.’

He maintains they are as much part of the future as of the past and have a critical and ongoing role – not least in preserving evidence in times of war and political scandal. Richard says, ‘Ukraine and Afghanistan have shown this. Libraries and museums have been deliberately targeted by invaders and by groups such as the Taliban. They want to eradicate the ability of people to form their own ideas. Libraries and archives are bulwarks for independent thought. They contain evidence – and that allows people to [think].’

And, he says, taking no prisoners [or fines], it is imperative that digital communications must be stored and catalogued, or there is a risk democracy itself will be undermined. His message is very much of the moment and was the subject of his work Burning the Books.

He says, ‘Recently, we have seen the use of encrypted messages in party-gate.  Such messages should be subject to the Information Commissioner and potentially available for Freedom of Information Act requests.’

With some clear unhappiness about the impact on records, he says, ‘We have seen messages deleted, apps deleted from phones and evasion of disclosure….It is not only about who attends what party but about the management of public policy throughout the pandemic, for instance- these are key policy concerns, not just for the long-term historical record but for immediate good government.’

‘Marginalia’ and notes are essential for establishing how policy was made and what people were thinking. Richard warns, ‘We are not going to have the evidence, evading the long term historical record. If you write it down, it should be subject to the 1958 Public Records Act. If you don’t want to disclose information, you shouldn’t write it down.’

Librarians are not generally regarded as threats to the establishment. But Richard is clearly in the militant wing of the profession. And politicians and the over-mighty should beware, he is on a mission hold them to account. But, in his sun-filled office, Richard, Bodley’s 25th Librarian, is also plotting a digital revolution for the stately Bod, politely of course [he is a librarian].

For all his reassuring presence, Richard is determined to throw open the Bodleian’s cyber doors to the world.

Digitisation of the collection will take decades, he says, but it will open up the Bodleian – and all of GLAM (Oxford’s Gardens, Libraries and Museums, of which Richard is also head) - to scholars everywhere.  It is a massive task, set to transform scholarship, according to the librarian. Think what Google Earth did for archaeology – and think what access to the Bodleian’s treasures could do for global learning.

According to Richard, ‘We will be preserving both the digital archives of the present and future, but also and the ‘analogue’ material of the past. And people all over the world will be able to access the collections...We have a really big research community in Oxford. There is going to be better access for these researchers, but this will also enable new forms of scholarship.

‘Digitisation is going to produce large scale data sets, which can be used with machine learning techniques to produce new information and research.’

Richard adds, ‘Some of this is cutting edge, but much of the cutting edge will be in the scale of the work. We are going to be taking an industrial approach to the pace at which we’re doing this. Some of the innovation is going to be in the workflows – we will create 100s of millions of images to analyse. There will be work in developing software, in analysis and in AI.’

But once everything is online, won’t the great libraries, such as the Bodleian, be redundant? Richard insists otherwise, ‘There are thousands of people going to Oxford’s museums every day and millions going to the libraries over a year. Digitisation is not going to replace them.  The greater use of digital technology is only going to encourage more [visits].’

He maintains digitisation is going to make possible new scholarship, without eradicating the old, ‘Working with these big data sets provides exciting new opportunities for scholars.  There is the prospect of new partnerships with scholarly bodies around the world and with independent scholars. New discoveries will be made as more and more material and meta-data is put online and the universe of knowledge expands.’

The librarian certainly does not see this as doing himself out of a job – far from it, ‘We have been doing digitisation for 20 to 30 years, but this is a step change in scale and speed. It’s never been more dynamic.’

And who knows what discoveries may come of people around the world being given access to the Bodleian’s treasures. He maintains, ‘You cannot underestimate the power of citizen scientists.’

It is a far cry from his early work, though. It will come as no surprise that Richard was a bookish child, very fond of his local library in Kent. He recalls, ‘The public library in my home town was a transformative institution in my life...My mother took me to the Deal public library once a week and eventually I went on my own and browsed the shelves. I made blind choices and decisions based on covers....After that, I had my school library and my university library. They were hugely important to me.’

He adds, ‘I got a job as a student librarian – which meant I earned a little money but I was also supported by very generous colleagues who helped me.’

After university [History at Durham], followed by a Masters in London, he was never going back to Deal, but was clearly destined to be a librarian. He explains, ‘I studied History and was interested in research and primary sources – going into county record offices and the British Library. I really enjoyed it.’

The young graduate stayed in the capital and joined the Houses of Parliament library, researching cases for politicians. It sounds exactly his sort of thing. Why did he ever leave?

In not so many words, Richard explains, the opportunities were limited. And he went from there to Edinburgh, the National Library of Scotland, and then to the University of Edinburgh library as the Head of special collections. These were formative experiences and allowed him to hone his thinking on the role of the librarian, ‘Broadly, the librarian’s contribution is in the social importance of archives and the preservation of knowledge. We have to  make the case for their social importance.’

He adds, ‘Fundamentally, libraries are about helping people, sharing knowledge and improving people’s lives. Who would want anything better than that?’

He has been in Oxford for nearly 20 years, starting as a keeper of special collections and, in 2014, taking over from Sarah Thomas as Bodley’s Librarian.

When Richard eventually retires, he intends to spend more time pursuing his long-held hobby of photography and, perhaps, get to see his favourite team, Manchester United play more often. But, you clearly cannot take the child out of the library and he also plans to spend more time in the archives and remembers fondly some cardboard boxes in a country archive to which he would like to return.

There is no doubt, though, the role has changed down the years. Quite a few early post-holders never retired. And Richard says, ‘In the early days they were mostly Divines. There was a professor of Hebrew. One of my predecessors went on to be the bishop of Lincoln.’

He hastily adds with amusement, ‘But I have no clerical ambitions at all!’

Now, the Bodleian also has a vast repository at Swindon where much of the collection is kept. It has been likened to the enormous warehouse at the end of Raiders of the Lost Ark, where the Ark is wheeled off to be lost forever among the parcels. Richard observes in a wry librarianly-way, ‘I hope it would be easier to find the Ark of the Covenant if we placed it in our book depository. It would have a barcode.’

When the library was founded more than 400 years ago, the librarian was given tremendous responsibility, but there were also several ‘rules’. The librarian is supposed to be unmarried and a linguist. Richard ruefully admits he is not much of a linguist, but happily confesses he is married. He laughs, ‘I have already failed in one of Thomas Bodley’s requirements – not to be married. But, actually, the first librarian did eventually get married. Another requirement was that the librarian should be a linguist, but I’m not strong on languages either.’

When it comes another of Bodley’s other requirements - that his librarian be able to stir up men’s benevolence - Richard has more than a little experience. He says, ‘I don’t know if it’s a bigger part of the role today than it was. But a big part of the role, is about money, whether the Bodleian or GLAM.’

But, he maintains, it is very much in keeping with the Bodleian’s long journey, ‘My profession has changed enormously but at the heart of it, it is the same – the preservation of knowledge and sharing it....We can make new connections with the world – in a global digital dialogue.’

There is no question of dispensing with the books. In fact, the library’s contents will never have been so well used by Oxford’s scholars and others around the world.

Book now to join Richard for our online alumni event: 'Saving Knowledge from the deluge',  6-7pm, Tuesday 24 May