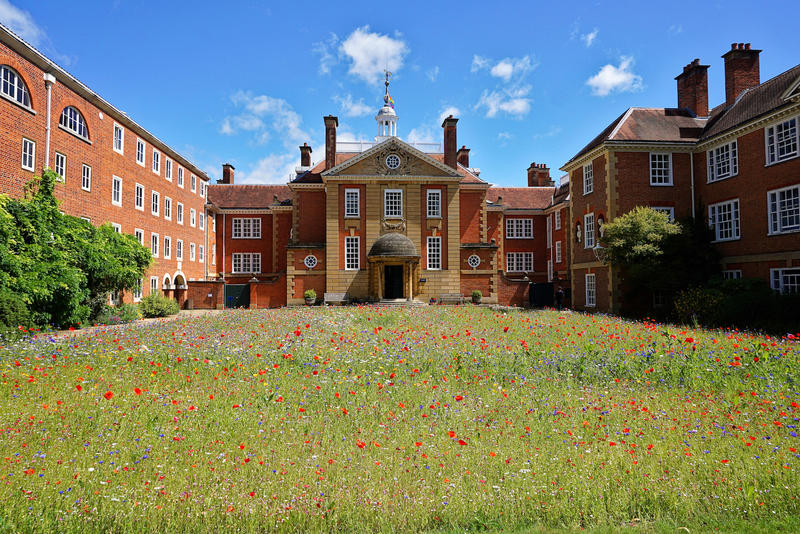 The Oxford Colleges Sustainability Guild was started by the bursar of Lady Margaret Hall, Bart Ashton, in 2016.

‘It was meant to cut across the usual channels and combat silos, hence the term Guild, which is suggestive of the idea that environmental sustainability is everyone’s work. It’s an informal forum.’

‘On one occasion we had a presentation from a sustainable food expert. In the discussion that followed a student from one college discussed the issues of menu choice with the catering manager from another college. Some of the potential for conflict is defused by having different colleges mixing at different levels in a very supportive context. It’s definitely not just for bursars, although they are well represented.’

Apparently, reports Ashton, over half the meals purchased by students at LMH are today plant-based, a revolution compared to even the recent past, itself a ‘bounty of meat’ that succeeded the privations the war years and the rationing that followed well into the 1950s.

Even a subject as apparently simple as food is enormously complex and sensitive to generation, habit and taste, but it is also front and centre in the central University’s strategic plan towards ‘net zero’ climate emissions. The hard reality is that red meat has an enormous carbon footprint.

The other great elephant in the room is travel, says Bart. Academic travel to conferences; staff travel to work on a daily basis, the nightmare of private cars clogging the medieval streets of Oxford and the near hysteria that any reform proposal kicks up in the Oxford Times. And that’s before we address the flying around the globe to and from the University by the great number of international students, whose footprint is huge and unaccounted for as things stand. 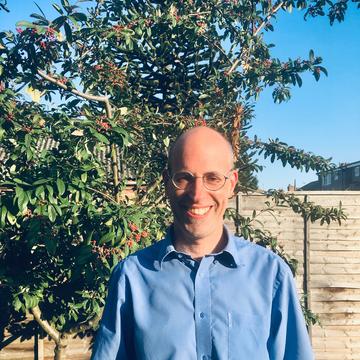 Bart has become renowned among the colleges as a green icon, yet a great deal of his leadership has been around pragmatic solutions, so often removed from the glamour of activism and global climate conferences.

He organised a secure space in the bike sheds where vegetable boxes could be delivered to students and staff by local cooperative Cultivate, for example. The boxes were delivered not by diesel van but by local bicycle-logistics specialist Pedal and Post. The culminative carbon impact is real and multi-layered, while the collaboration reflected strong engagement by students who encouraged the initiative from day one.

‘Of course, the real ‘big picture’ impact Oxford has is ideas and research, thought leadership and teaching. Future world leaders will hopefully go and make big differences. We aren’t going to save the world by switching the college light bulbs to LEDs,’ says Bart.

Yet college lightbulbs still matter rather a lot and students are very alert to the sense of disjuncture, when they are reading about global climate crisis in the library, illuminated perhaps by an energy-hungry lightbulb. Increasingly they are then raising the issue at the Junior Common Room level and requesting change.

What does a college do to advance sustainability in a suitably urgent fashion? Number one, says Bart, is to develop a policy, to have a mandate with the endorsement of Governing Body. But, he cautions, ‘It should not take three years. It should be fast; it should be tailored to the college, naturally, and while it takes up some time it does not require expenditure.’

Next, while he sees that a dedicated sustainability ‘role’ at a college might be on the cards, Bart also sees the potential pitfall – that everyone else gives up their effort. ‘The effort has to be college-wide. Everyone has to be aware of it, everyone has to support it.’

Action comes next. He says that recent years have seen a shift from carbon accounting for primary energy consumption – electricity and gas – to a broader understanding about the centrality of food and travel, precisely the stuff that affects everyone every day.

Other topics that have shot up the agenda are plastic waste and biodiversity. ‘Where three years ago the JCR might have requested more recycling bins, now they’re demanding an end to visible plastic wherever possible.’

The LMH gardeners are now sharing knowledge about novel composting techniques and gardening for biodiversity, with other colleges.

Bart’s intensely aware of the way that COVID has displaced climate, even as a talking point.

‘Yet,’ he says, returning to the example of the local market garden and sustainable food business run by Cultivate, ‘…this food service expanded rapidly when lockdown began, as did the bicycle delivery side of it run by Pedal and Post.’

In this limited example, it is perhaps the case that COVID will be seen to have accelerated a change that was already underway, part of a wider shift that exploits technology to achieve a particular service that resonates with an abrupt period of social distancing.

If local supply chains have benefitted from lockdown, another silver lining of COVID has been to show that rapid change is possible after all – even at Oxford, says Bart.

Many an individual has become aware of the potential disconnect between the comfortable traditions of a college and the urgency of climate change.

Everyone has to balance out their treats and their responsibilities these days, says Bart. It’s not just about swapping steaks for lentils. The glorious treat of visiting the porter’s lodge to break out of the library carrel has changed too. In bygone years one hoped for a letter. Today it might be an unsustainably cheap T-shirt delivered by one of the zero-hours contracts type delivery services by a diesel van that’s just poisoned the air all over the city.

Yet Bart says the student awareness of these interconnected issues is high. ‘There has been much wider public awareness of nature and food supply chains, a much higher degree of thoughtfulness than before about how different actions interact, when perhaps it was before COVID too easy to take it all for granted.’

As Oxford resumes as a physical University with students mostly present this month of October 2020, it will be deeply marked – but not all of the lessons are doom and gloom says Bart.

‘The Sustainability Guild will resume!’ says Bart. For every negative there is a new opportunity and he sees light at the end of the current tunnel.