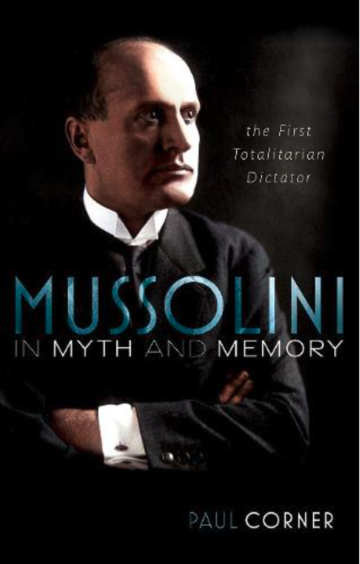 28 October marks the centenary of Mussolini’s ‘March on Rome.’ Paul Corner debunks the tendency to go easy on Mussolini in a searing work of scholarship

It is one hundred years since the world took a violent turn towards fascism. This sinister moment is worth interrogation because it is in danger of being forgotten.

The actual day, in 1922, was 28th October. The ‘March on Rome’ was an organized mass demonstration and a coup d'état which resulted in Benito Mussolini's National Fascist Party ascending to power in Italy.

Anticipating the centenary is the formidable scholar and former Director of the Centre for the Study of Totalitarian Regimes at the University of Siena, Professor Paul Corner.

Professor Corner is also a Senior Associate Member of St Antony’s College, Oxford, one time JRF and founder of the Pontignano Conference.

He says that there is a re-accommodation of Mussolini that’s long been creeping across Italian society like an incoming tide, propelled by a newly ascendant populist right.

From a British public perspective, Italy too often comes onto the radar as a beloved holiday destination. Yet in the election just held (25 September, 2022) Italy transported to power Giorgia Meloni’s Brothers of Italy, described by the Economist as ‘a stridently nationalist movement with its roots in neo-fascism.’

In Mussolini in Myth and Memory, The First Totalitarian Dictator, the author takes a careful stroll through the past and finds that Mussolini was fully a ‘totalitarian dictator,’ and that lots of other current, re-accommodating ideas about Mussolini are simply wrong.

One argument is that Mussolini wasn’t Hitler and with no Holocaust to contend with, he couldn’t have been that bad. Secondly, he brought in pensions and reclaimed some land for the benefit of farmers. Thirdly, he smashed the mafia. Fourthly, he was a chump but a lovable one who drove fast cars, thus ‘modern,’ not to say glamorous. Fourth, he invaded Ethiopia but it was inconsequential. And so on.

This approach is dubbed fascismo ad acqua di rosa, or ‘rose water fascism,’ or more completely translated, viewing the past through rose-tinted spectacles.

Notes the author, in summary: ‘Why make a fuss? After all, as the oft-repeated argument goes, in the final analysis Mussolini did a lot of good things.’

Well, none of this stuff is true, or rather, memory is how we reconstruct the past based on our present; history is what actually happened and our serious attempt to reconstruct it.

Professor Corner makes this critical distinction early on and it becomes a powerful tool.

At one point he cites some Edward Gierek Polish sausages (after the Polish Communist leader 1970-80), said to ‘recapture the taste of sausages enjoyed by our parents when things were better.’ That is a classic example of the power of nostalgia at work.

History, as opposed to nostalgia, shows that the pre-work towards pensions had already been done by Mussolini’s predecessors; that the Pontine Marshes land reclamation didn’t work to the benefit of the little farmers so much as the big landowners on whose support the regime rested (but was a huge propaganda tool); that the campaign against the mafia didn’t ultimately succeed; that yes, the modernity of the fascist self-presentation was part of its appeal, but it was a façade. The regime rested ultimately on violence.

Ethiopia is one of the darkest chapters of the twentieth century, where Italy murdered perhaps hundreds of thousands of innocent civilians in cold blood by calculated use of poisonous gas and numerous massacres.

Mussolini’s defenders happily ignore all that because the exact numbers were never collected and ordinary Italians were barely aware of it.

The author contends that if fascism itself is a bit of a black hole in Italian memory, then ‘the invasion of Ethiopia represents a black hole within a black hole.’

Is a bit of nostalgia really so unforgivable?

‘…the illusion that Fascism was essentially innocuous and Mussolini an efficient and benevolent leader cannot be considered mistaken but essentially harmless; it is an illusion that is damaging because of the way in which it speaks to the present.’

If Mussolini mesmerized the world with a ‘phantom utopia’, it is our job not to fall for it whether in memory or in its new guises.

In recent weeks on Italy’s election trail, the ‘new’ guises have not even been subtle, with numerous FDI supporters wearing black shirts at rallies, still associated in Italy with fascist militia. A direct and deliberate citation from a badly remembered past.

Corner judges that under Mussolini, there was ‘violence, hardship, privilege, nepotism, and corruption on a grand scale.’

Italians fell for the utopia for a while, but they didn’t ultimately swallow the death of half a million Italians as a result of calamitous Second World War tactics directed by Mussolini himself.

When the so-called ‘ventennio’ ended, the ‘twenty years’, it did so with a partisan shooting of Mussolini, following which he was kicked around and reportedly urinated on before being hung, head down, from scaffolding in Piazzale Loreto in Milan.

Corner is at pains to point out that it was a violent end to a violent regime. At the point of its demise, there was an overwhelmingly bitter hatred for Italian fascism, from most Italians.

He would Italians to be more cognisant of that moment.

The book shows that the ‘rose-water fascism’ idea, that Italian fascism under Mussolini was essentially benevolent except for some mistakes such as siding with Hitler, (‘his one mistake!’) is basically nonsense.

Slender enough at 164 pages, this volume is a fluid, engaging read for the lay person that reawakens an Italy that will be far less familiar than the last holiday taken in Tuscany.

It sits within scrupulous scholarship concerning Italy in the inter-war period, yet its lessons immediately resonate with the world of 2022, whether Russia’s attempt to rebuild its past empire through aggression, or America’s quest to be ‘great again.’

Never has the tension between popular memory and actual history been more stretched, or the role of professional historians more valuable.