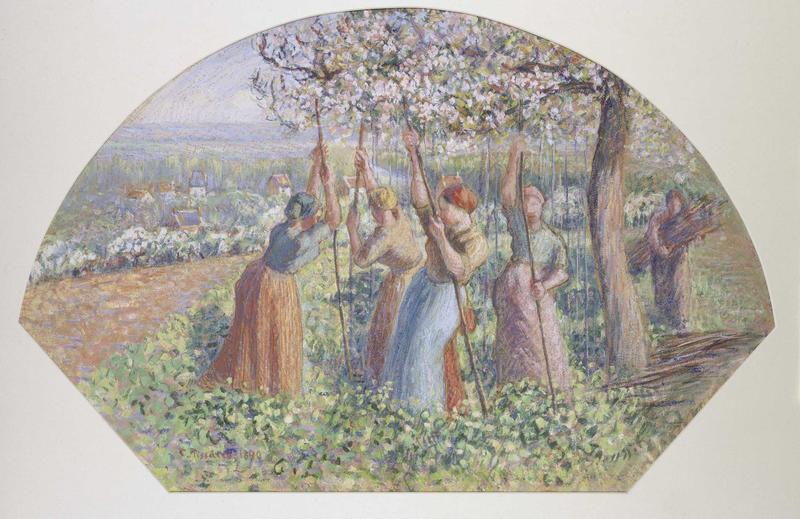 Pissarro is considered the father of Impressionism, not only because he worked with numerous other artists but because he was the only one to exhibit at all eight Impressionist exhibitions held between 1874 and 1886.

The Ashmolean approach to Pissarro has not been to mount a direct comparison with a peer, as others have in the past, but to ‘evoke’ those contemporaries at different junctures in Pissarro’s long and extraordinary career.

Not that they are absent. In fact while the exhibition begins and ends with Pissarro self-portraits (the last shown below), it commences properly with lush, sensitive river bank scenes by Corot and Daubigny, while the final room offers the luminous technicolour of Georges Seurat’s The Channel at Gravelines, Evening (1890). 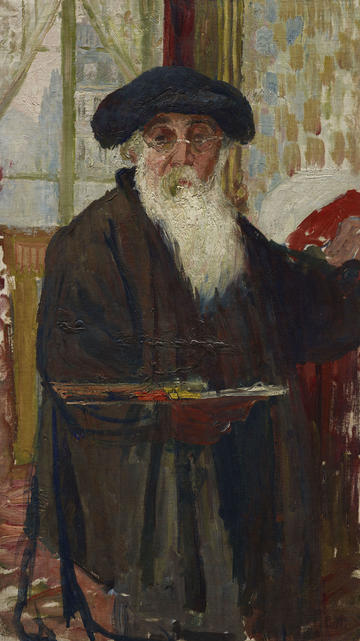 Overall, the exhibition features 120 works, 80 by Pissarro and 40 by his friends and contemporaries, with eight paintings on display for the first time in the UK.

By 1890, Pissarro had journeyed from a figurative, palette approach – the one we associate with Impressionism – to the far more formal ‘dot’ technique Post-Impressionism of Seurat and Paul Signac, which Pissarro himself embraced.

It doesn't matter really what label you apply but the 'post' in Post-Impressionism seems to anticipates the Twentieth Century - just think ahead a few years to Roger Fry and his 1910 exhibition at the Grafton Galleries. He was looking back but it was cutting edge, at least in England.

The exhibition takes us on an earlier journey, Pissarro's journey. While it wisely features defined sub-sections such as a remarkable collection of portraits of immediate family members, it displays nonetheless a teaming creativity that moves the game on constantly, right up to and including Seurat and Signac's dot technique.

What is so striking is the simply enormous range of media employed by Pissarro. There is paper and pencil; pen and paper; charcoal and gouache; pastels on grey paper; watercolours over black chalk, and only then watercolour paintings and oil paintings, not to mention a wide range of lithographs and etchings.

Pissarro was the master of technique yet progressive enough to try his hand at everything.

Indeed, one of the absolute highlights and incidentally the image chosen to adorn the catalogue cover (a 256-page humdinger authored by Colin Harrison, Senior Curator of European Art at the Ashmolean, with an introduction by Dr Linda Whitely, research associate in Oxford’s Department of the History of Art) is Design for a Fan: The Pea Stakers, 1890 (above).

This painting picks up on a late-nineteenth century European fad for all things Japan and in this case painting silk fans, with a view to them actually being used as fans by fashionable women.

Pissarro had produced his first fan twelve years earlier, perhaps under the influence of Degas, and may have seen it as a money spinner suggests the curator. He desperately needed more income all his life.

The scene in The Pea Stakers is an Arcadian delight, a group of women pushing long pea sticks into the earth underneath blossoming apple trees. The composition of the women almost places them in a dance with the earth, making them appear to sway with the landscape, while in the distance a fifth woman brings up a new bundle of stakes.

Here is yet another technique, Pissarro using tempera to achieve a drier yet even more refined colour atop black chalk and brown paper – suggesting that the template of the fan had overtaken the actual idea of painting on silk.

The result is a superb embodiment of la France profounde, which isn’t about nationalism so much as it is about landscape, rural ways and the human figure in that landscape.

Definitely more coarse brown paper than fine Japanese silk, perhaps with a scent of garlic. Yet luminous with the joy of spring.

A remarkable number of the images in this show depict ordinary people doing ordinary things, whether carrying fire wood or sawing timber, gathering grass or picking apples high in the trees.

There are many scenes of rural happiness depicted, and whether we regard the emotion as real or idealised women are shown to have agency within their own communities and the entire exhibition beams with colours that in 2022 seem to reaffirm life after the pandemic.

£7.50–£16.00. Booking essential.  Alumni can claim concessionary rates on paid exhibition tickets: please bring your My Oxford Card as proof of eligibility on the day of your visit.

Alumni can also claim 20% discount off the first year of your Ashmolean Membership. Ashmolean Members enjoy unlimited free entry to the exhibitions, discounts in the shops, café and restaurant, exclusive Members’ events, and much more.

The Ashmolean’s spring exhibition will be the first show in Britain in 20 years devoted to the ‘father of Impressionism’, Camille Pissarro (1830–1903). It will feature 120 works, 80 by Pissarro and 40 by his friends and contemporaries, with eight paintings on display for the first time in this country. The exhibition draws on the Ashmolean’s Pissarro’s archive, the world’s largest collection devoted to an Impressionist artist, revealing intimate and fascinating details about Pissarro, his artist-friends and relatives. It aims to show him as the galvanising force that propelled modern art forward and without whom there would have been no Impressionism. The show will also be the subject of a new feature-length film by critically-acclaimed production company, Exhibition on Screen, available in cinemas worldwide from 24 May 2022.