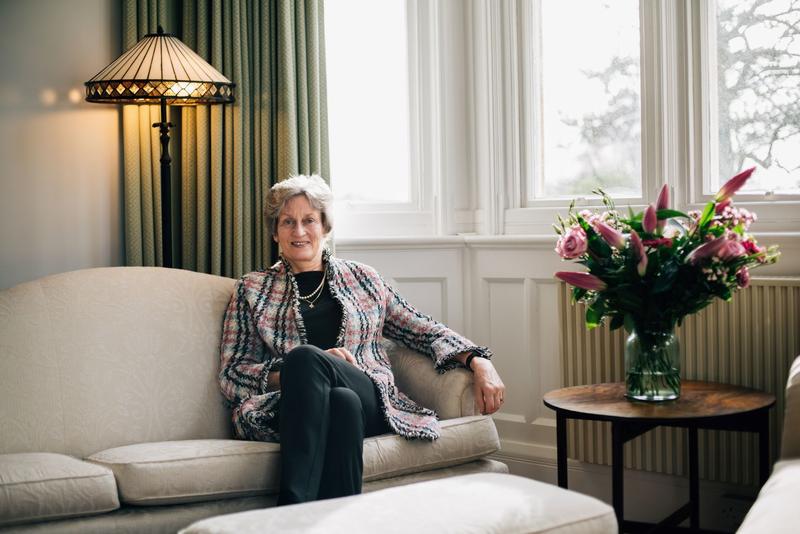 Professor Dame Sarah Springman became a DBE in the 2022 New Year Honours, prompting her to note with a chuckle that it was ‘good timing’ given that she formally began her post as Principal of St Hilda’s exactly a month later.

But she wants to be known straightforwardly as Professor Springman, adding that St Hilda’s ‘seems to be pretty egalitarian.’ She looks forward to leading the College in a similar vein, staying true to its principles of ‘excellence and equality’ and building the College community in such a way that all students can thrive in a carefully-crafted environment that prioritises sustainability.

As we speak in person in college on 4 February, she confirms that the move back to the UK from ETH Zurich, where she has been Rector since 2015, has literally just taken place the preceding week; the crystal air of the Engadine barely displaced by the lower-lying air of Oxford.

Such a recent international relocation merits a brief recap on where Professor Springman has come from, because in lots of ways her barnstorming, pioneering career as a geotechnical engineer not only led her from Cambridge to her professorship in Zurich in 1997, but has coincided with the flowering of ETH Zurich (also known as the Swiss Federal Institute of Technology), as an outward-facing, globally renowned powerhouse.

But here we are in St Hilda’s in one of those delightfully high-ceilinged Victorian rooms with huge, light-filled gothic revival bay windows and the Cherwell River glinting in the near distance, brimming with winter waters and reflected sunlight following a bout of heavy rain.

‘It took months to prepare for the move. Moving is awful but it’s also cathartic; you can reorientate for the future and get rid of so much stuff at the same time.’

Even by the elevated standards of an Oxbridge Head of House, Springman’s track record is outstanding, evoking four-minute mile legend Sir Roger Bannister (1929-2018) who like Sarah was immensely successful in the twin fields of science and sport, later becoming a Head of House (Master of Pembroke College).

Professor Springman has a glittering palmarès as a triathlete, duathlete and rower, only recently setting new age-group records for indoor rowing (‘it was during the pandemic, where we rowed a marathon on a stationary erg…’).

Professor Springman is also a world leader in geotechnical engineering, which can be accessibly described as soil mechanics and making sure that dams don’t collapse and towns aren’t built in the path of a future mud slide or rock collapse.

Of course, that’s an absurdly over-simplified description of Professor Springman’s field of academic inquiry, but an accurate starting place.

Professor Springman qualified as a civil engineer soon after her first degree from Cambridge, working on quality control for a major dam building project in Fiji before returning to take up her doctoral work in Cambridge.

‘It’s been a great concern of mine that so few academics can afford these days to take any time out of their career to apply their knowledge…yet in my field more than many, an understanding of the applied side informs the research and vice versa.’

Her doctoral work led to a University lectureship at Cambridge, but before long she recalls chairing a session at a conference in Denmark, with at least 300 people in the room, age 38.

Her evident star quality led to her being appointed a professor at ETH Zurich in 1997, a coup at a time when her field was almost completely male, ETH was less international and Springman was young by conventional metrics.

Sarah is formally described as an expert in ‘geotechnical modelling of soil structure interaction problems, including design and construction of abutments, pile foundations, reinforced soil, and ground improvement of soft and sensitive soils…’ 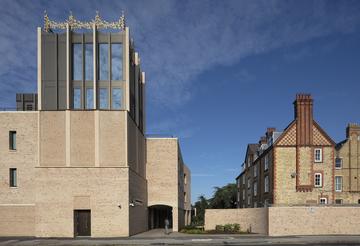 She has pioneered the use of laboratory-based centrifuges to model the behaviour of soil under appropriately scaled stresses by increasing gravitational force (‘imagine a bucket of water: if you swing it over your head fast enough the water stays in the bucket…’).

This research has led in turn to computer-aided modelling that has transformed civil engineering and made the construction of mega-structures like dams a less haphazard proposition than before.

She confirms that Swiss competence in the field is high owing to the proximity of mountains, with all the attendant concerns around mud, snow and rock slides. There have been frightful tragedies in the history of the country.

Oxford also leads the geotechnical engineering field today in ways that it didn’t quite when Professor Springman first went to Cambridge in 1975, although she was offered a place at St Hilda’s and notes diplomatically that she had a favourite aunt in Cambridge with a lovely garden, which tipped the scales.

‘I have never forgotten my interview at Balliol with Dr Alistair Howatson. It taught me there and then what makes a good tutorial…’

Back to the river, and it is hard to digest the fact that alongside this immense academic track record Sarah competed at a professional level in sport, including the 1990 Commonwealth Games Triathlon in Auckland, New Zealand, and winning twenty elite European Triathlon Union (ETU) Championship medals in triathlon and duathlon.

The reason her CBE cited ‘sports administration’ partly reflects her Presidency of British Triathlon, the UK Governing Body of the sport, leading up to the London 2012 Olympics – the year that the Brownlee brothers Alistair and Jonathon won gold and bronze respectively in the men’s final, and Swiss Nicola Spirig won the women’s event, a competitor well known to Sarah.

Professor Springman was awarded her DBE in 2022 for services to engineering and services to international sports administration, which includes her role as Vice President of World Triathlon (over 3x4 years in two parts) and in leading the bids to get triathlon into the Commonwealth and Paralympic Games.

Married to former Olympic rower Rosemary Mayglothling, who is in the midst of a PhD on the subject of women and coaching in sport, Professor Springman’s own sporting trajectory came around to a third athletic career as a rower and this is where the physical proximity of St Hilda’s to the river holds powerful attractions.

‘What the college stands for is very important to me. Excellence and equality have been significant driving motivations throughout my career. And the site of the college is a great bonus with the gardens and the wonderful river frontage.’

We muse that perhaps St Hilda’s has the most river frontage of any college – something of a dream come true in conjunction with the college’s recent physical transformation through a capital building project, which includes a modernist pavilion and terrace right on the river bank, adjacent to a punting wharf (see below). 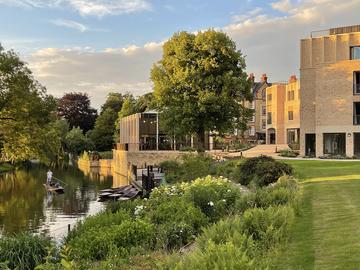 The building programme was completed in 2021 and the new Anniversary Building (see above) and Pavilion have increased student accommodation and provided more facilities for all college members. From the outset, the buildings were designed in an environmentally conscious way. Subject to planning permission, Professor Springman hopes that the college site will be developed further to enable more of St Hilda’s students to live on campus for the duration of their degree. Sustainability is integral to all future plans and she will be leading the college community to ensure that it minimises its impact on the environment in this and in all other areas of activity.

‘Having another activity is central. It will certainly be a part of my Principalship at St Hilda’s to encourage sporting and musical achievement as a counterpart to academic success. Traditionally, two endeavours may be seen to be in conflict with each other but they’re not. They reinforce each other physical and mental in balance, wellbeing the outcome. We are very lucky to be near to many open spaces and to have the Jacqueline du Pré Music Building on the college site.

We should create an environment that reflects the college’s ‘family’ style and in which the students can develop their talents and perform to the best of their ability.'

Returning to the academic side, Professor Springman describes herself as a ‘very mechanistic thinker.’

‘I try to help my students to think in a mechanistic way, which requires them to combine critical thinking, experimental measurements and observations and analysis'. And we talk about critical state models in soils as well, which originated in Cambridge and is now part of the syllabus at Oxford. 'I met a student here two nights ago at dinner who was studying soil mechanics and she was telling me all about her curriculum. It’s very heartening and I will continue to encourage women towards STEM subjects generally, where gender parity is still lacking.'

We briefly discuss the Goldau disaster of 1806, when 457 Swiss villagers were destroyed by a terrible rock avalanche.

‘Every Swiss knows about it, but the intellectual significance was greater still because we explained this geological event through mechanisms associated with fractal fragmentation rather than as a divine punishment.’

The recent increase in natural hazards due to extreme rainfall events has raised the profile of geotechnical engineering as an academic field and offers further reasons why working in an interdisciplinary manner in the age of climate change has never been more important.

Professor Springman will give a lecture later this spring at the Engineering department, noting that it might take her away momentarily from being Principal, but that these links to the academic research community are essential.

Given the importance of STEM subjects and the broader effort of the University to encourage women in these disciplines, it is a great benefit to be a Principal still in love with her subject.