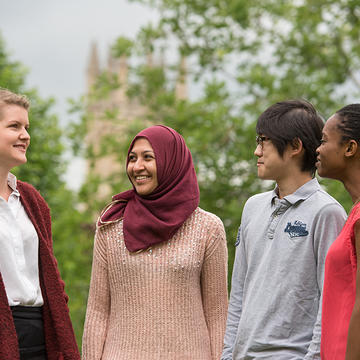 Incoming Oxford students from around the world were given a taste of life at Oxford, at a series of freshers’ events held by alumni groups globally this summer.

Freshers events are a strategic priority for the Alumni Office and we report back on them annually, as part of our metrics. The events also enable alumni groups to encourage younger members to join their mailing lists.

More than 20 groups held freshers’ events virtually this year, while in-person events were held in China, Cyprus and Luxembourg.

In the UK, seven events took place, including online gatherings in Manchester, Liverpool and London and a joint event held by OUS East Sussex and OUS West Kent for students from Kent and Sussex.

Alicia Garcia Sierra, who joined OUS Madrid’s event, said she found the meeting really useful.
“I loved hearing about all the experiences, especially those related to the “life in Oxford”, which was a really great unknown for me,” she added.

“Also, it was nice to know more people in my same situation and I hope to meet some of them when we arrive in Oxford.”

In Melbourne, Australia, more than 40 freshers and around ten alumni joined OUS Victoria’s online event. The group answered questions from students about Oxford, before breaking into smaller groups with alumni to chat with freshers.

“Although we’d have loved to have an in-person event, I’m very happy with the turnout, and that we were able to welcome so many interstate students,” said Hannah Gould (St Antony’s, 2014) of OUS Victoria.

“I will definitely think about incorporating an online element into future freshers’ farewells.” 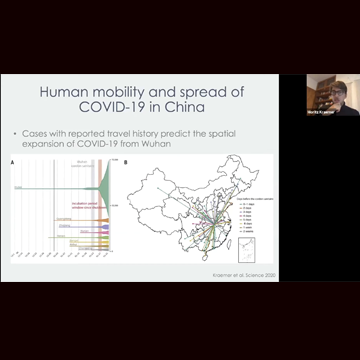 A trio of North American alumni groups have come together to successfully deliver a series of webinars.

OUS Mexico, OUS Ottawa, and OUS Washington, D.C  are each organising a live online event for their Three Capitals Webinars series, open to all of the University’s alumni and friends.

OUS Ottawa will host the next event in December, with Mark Carney (St Peter’s and Nuffield), former Governor of the Bank of Canada and of the Bank of England.

“We hope our collaboration will contribute to that mission, by strengthening the bonds between Oxonians on this side of the Atlantic.”

Spotlight on the Oxford Alumni Association in Mexico

Karine Yuki (St John’s, 2013), of the Oxford Alumni Association in Mexico, offers her perspective on the coronavirus pandemic and how the group has adapted over the past few months:

“COVID-19 has challenged each and every one of us, just about everywhere in the globe. For us at the Oxford Alumni Association in Mexico, our committee was split across Mexico, Brazil, Chile and the UK as many of us temporarily moved closer to our families. Geographically, we could not be further apart – but we have come together more than ever before to find strength, unity and resilience during the crisis.

Alongside our 450 members, we have proudly supported a donation drive from the Peterson Schools in Mexico to raise funds for 3D printed protective personal equipment . This included more than 11,000 visors for frontline health workers, which were sent to more than 12 hospitals offering free treatment of COVID-19 patients throughout the country.

We have also launched a professional mentorship and job posting initiative to support Oxford alumni who have lost their jobs . The initiative stemmed from a programme we started last year to support Mexican students applying to Oxford. Our expanded programme now has 15 mentors who have signed up to offer advice, support and connections to alumni seeking job opportunities.

More recently, we have also started a collaboration with alumni groups in Ottawa and Washington, D.C through the Three Capitals Webinars.

In many ways, we have been challenged to draw on our creativity and collaboration to respond to COVID-19 – and we are stepping up to that challenge in Mexico.”

To find out more, email the group. 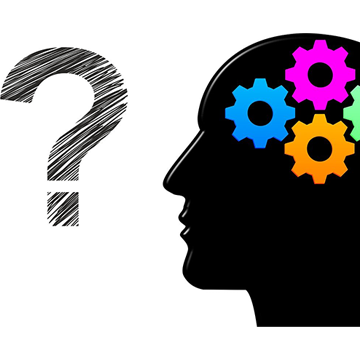 OUS Alberta (Calgary) are celebrating being crowned quiz champions after their team beat Cambridge and the London School of Economics in the first virtual Alberta UK Alumni 'University Challenge' quiz.

The online event was held this summer in place of The British Consul General in Calgary’s traditional annual barbecue for the resident British university alumni groups.

“After a closely fought match, Oxford was victorious!!” said Geoff Cowling (Balliol, 1997) of OUS Calgary.
“The High Commissioner is now considering rolling this successful and entertaining evening out across the country for alumni groups in other cities to enjoy!”

Thanks to all alumni groups who completed the 2019 Update Survey, which looked at group activity between 1 August 2018 and 31 July 2019.

Below is a summary of the results*, which we hope you will find useful. These are also available as a PDF report. 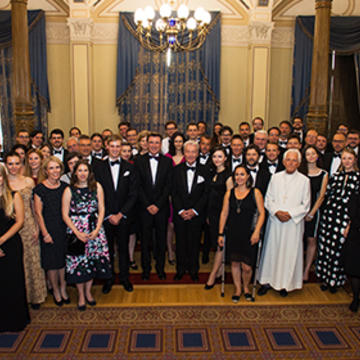 Spotlight on the Cambridge-Oxford Alumni Club of Hungary (COACH)

Since reforming in 2018, the Cambridge-Oxford Alumni Club of Hungary (COACH) has been flourishing and now boasts around 350 members and a range of successful events.

The club hosted several prominent speakers, including the President of the European Court of Justice and Her Majesty's Ambassador to Hungary, convened annual dinners and science seminars - and even ventured into social wellbeing with ice skating and yoga sessions.

From the outset, COACH has strived to serve as a platform bringing together current students and alumni for the benefit of all members and, this spring, the club launched a mentoring programme. The programme is currently running online as a result of the coronavirus pandemic.

The programme aims to facilitate career advice, professional guidance and support along with the exchange of best practice. COACH members are matched with current students so as to inspire one other, exchange ideas and reflect on career goals, while maintaining a connection with their university.

To find out more, email the club. 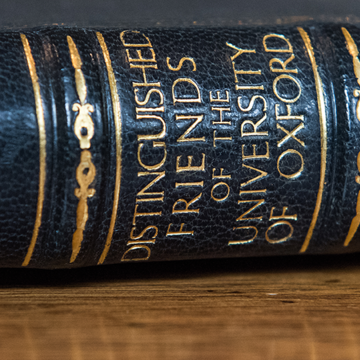 Congratulations to OUS Cornwall Secretary, Richard Cockram (Brasenose, 1962), who has received the prestigious Distinguished Friend of Oxford award, for his work in supporting local alumni and also helping potential students to achieve their aspirations.

The award recognises the role of outstanding volunteers in having a positive and lasting impact on the wider collegiate University.

Richard emphasised that the work he does would not have been possible without the tremendous support of the Cornwall group’s committee.

Richard read Mathematics at Brasenose and is an example of how an alumnus can make a difference to local alumni and potential students, while supporting the University’s strategic priorities.

He has also been a generous supporter of the Brasenose Annual Fund since 2007.

'I’m not normally given to shows of emotion, but immediately after receiving the award from the Vice-Chancellor I felt tears in my eyes,' he said.

'I was sincerely moved to think that our efforts for the University here in Cornwall were deemed worthy of such an award.'

Recipients of the 2019 Awards were honoured at Meeting Minds in Oxford by the Vice-Chancellor of the University, Professor Louise Richardson, last September. 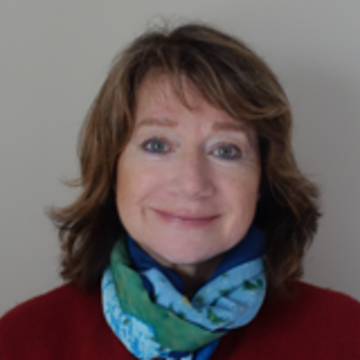 Congratulations to OUS Victoria committee member Elizabeth Beattie (Keble, 1979), who has been awarded an MBE in the New Year Honours.

Elizabeth is a freelance writer and researcher and has been involved with OUS Victoria for more than 20 years, starting out as events coordinator. She was secretary of the group for just over 10 years and remains on the group’s committee.

Elizabeth received the award in recognition of her services to education and UK/Australia relations.

As group secretary, she worked to enhance the links between alumni and the University, and encourage prospective students to study at Oxford.

She has also focussed on facilitating the journey of freshers who are about to start at Oxford.

Elizabeth read Modern History at Keble and was one of the first women to study at the college.

'I am honoured and incredibly proud to receive this recognition,' she said.

'I have been supported by an amazing committee of alumni at OUS Victoria who have been so generous with their time. I value the friendships I have established across the society.

'My education and experience at Oxford has made an enormous difference to my life. Apart from my immediate degree in history, I learnt life skills, such as the ability to reason, how to problem-solve, resilience and flexibility.

'I am looking forward to continuing my strong association with the University.' 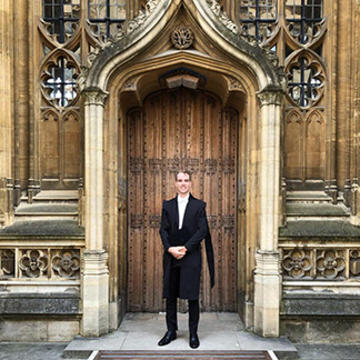 The Oxford University Society (OUS) of South Australia raised more than $10,000 to help support Jack to study for a DPhil in Engineering Science at St Edmund Hall by arranging a quiz night and silent auction in Adelaide.

Donations, entry tickets, a raffle and the auction helped raised more than $10,000 towards Jack’s tuition and expenses.

OUS South Australia President Prof Hilary Winchester said: 'Fundraising isn’t our usual practice, but we thought Jack was a worthy cause and we were pleased to help support him.

'However, it’s good to know that, in combination with others, we may have been able to help him realise his ambitions.'

Despite family financial difficulties, Jack became the fifth generation Kelly to attend Prince Alfred College in South Australia and it was there his love of academia and rowing blossomed.

He went on to study for a BSc in Engineering Sciences at Harvard, where he also joined the prestigious rowing team. He gained selection onto the senior Australian Rowing Team in 2018, competing in the World Cup regattas in Austria and Switzerland.

Jack moved to Oxford in August and is now buckling down to his studies and training hard for the rowing season.

He said: 'I am truly grateful to OUS South Australia, who initialised the idea of having a fundraiser to help support my DPhil studies at Oxford.

'As an international student it is difficult to provide a financial guarantee with limited funding streams available to you, and having a fundraiser gave me the confidence to do so.

'For this coming year, I can now set my sights on my academic goals and sporting goals within Oxford which may not have been possible without the support of the Oxford alumni society.'