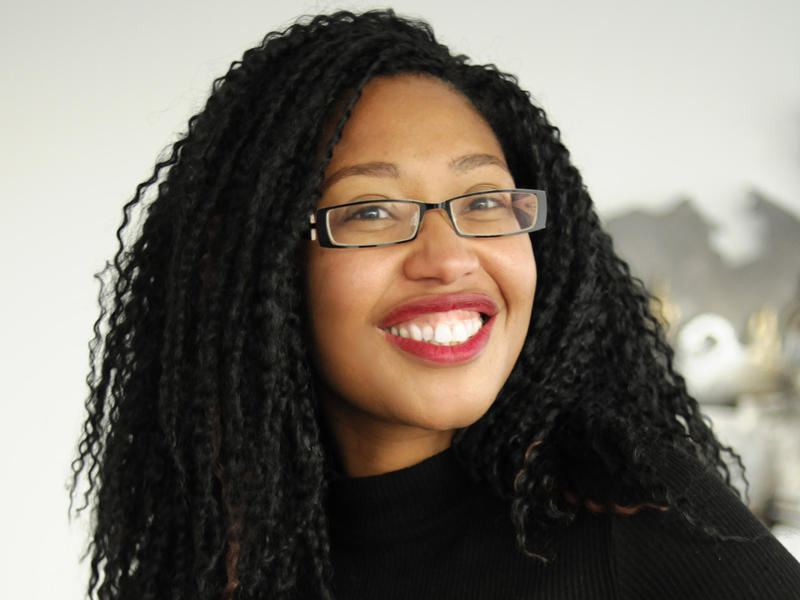 We spoke to Jasmine Richards (LMH, 1999) about getting BAME representation into children's books. To celebrate Black History Month 2019, Jasmine spoke to us again about inclusivity at Oxford and what BHM means to her.

After graduating from Oxford you first went into the editorial side of the publishing industry. What influenced this decision?

After finishing my degree, I ran the Oxford Access Scheme for a year. I visited inner-city state schools across the country to talk to young people about applying to higher education and I also ran summer schools and workshops at Oxford colleges to encourage applicants. I realised during this year how important books were to raising aspirations and how they had raised my aspirations as a child. I knew after that I needed to work in books. 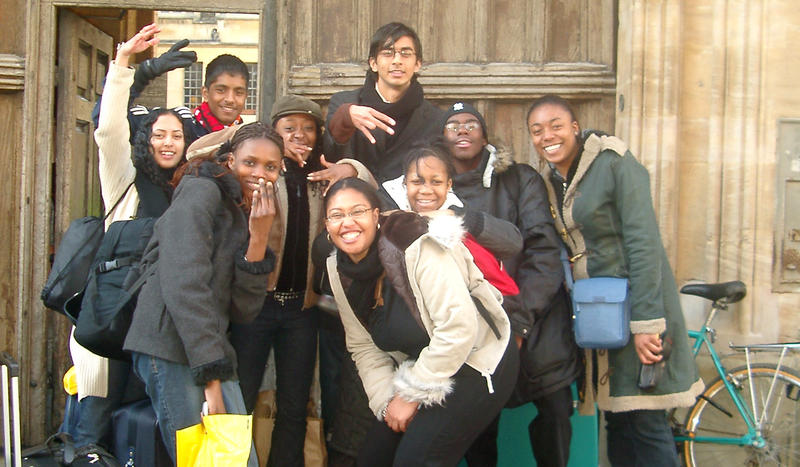 Studying English Literature and Language at Oxford taught me a lot about analysing a story and talking about books with confidence and passion. The idea that I would get to do the same thing as an editor was extremely appealing. I joined the Penguin Graduate Trainee Programme in 2004 and have worked in children’s publishing ever since.

Were you always interested in becoming a writer – and specifically a children’s writer?

Stories undoubtedly shaped me into the person I am today. They raised my aspirations, broadened my horizons and fired my imagination. I was a hardcore bookworm and mum had to frisk me for books before birthday parties. I also constantly carried around a little notebook where I jotted down ideas and poems.

I love doing school visits and I’m always blown away by the breadth and inventiveness of the ideas that children come up with. It really makes me wish I still had my notebooks from childhood!

When did you write your first book (and what was it)?

My first novel, The Book of Wonders, was written in the evenings and on weekends whilst I was working as a children’s fiction editor. It was published in 2010 but I actually had the idea for the novel when I was nine years old. As a young reader, I loved the tales from The Arabian Nights and how Scheherazade always ended her stories on a cliff hanger so that she could live for another day.

However, even as a child, it annoyed me that the sultan (who has a habit of beheading his wives) gets a happy ending. I wondered whether there might be a different version of this story and that was when the idea for The Book of Wonders was sown.

Did working in publishing help you to understand the industry when you came to getting your first book published?

It definitely gave me some inside knowledge in terms of which literary agencies to approach for representation. I also understood what a strong submission package and pitch looked like. On the flip side, it felt very exposing when my book was out on submission as it was being sent to my peers and people I had worked with previously.

When did you first notice or become aware of the lack of diversity in books for children? Is it something you recall noticing reading these books yourself?

Growing up in Haringey, North London, books were a window into other worlds but they were very rarely a mirror. The books that did feature characters that looked like me tended to be set in the past or were stories of struggle or adversity.

I longed to see contemporary characters that looked like me. Girls like me having fun, going to spy school, flying on broomsticks or vanquishing dragons. 30 years on, things are getting better but there is still a long way to go.

Why do you think there is such underrepresentation in children’s books?

I don’t think it should be underestimated how intimidating or impenetrable the world of publishing can seem. This is true for many writers but particularly true for writers from underrepresented backgrounds.

Publishers are doing a better job now of reaching out to authors from different backgrounds. The explosion of self-publishing has been quite the disrupter and made publishing feel a lot more accessible.

In addition, efforts to make the industry more inclusive from the inside out with endeavours like Creative Access will go some way to improving representation in children’s books. The more diverse a work force, the more diverse the kinds of books that are published and the more opportunity there is to connect with readers.

Can you give us a brief overview of what STORYMIX is/does?

STORYMIX is a children's fiction production company with a focus on inclusive representation and fabulous storytelling. It creates young fiction series for publishers and works with authors and illustrators from predominantly BAME backgrounds to write those books.

​Why was founding STORYMIX important to you?

Of the 9,115 children's titles published in 2017 only 4% featured Black Asian Minority Ethnic characters. Only 1% of those books had any BAME lead characters at all. This compares to 32.1% of schoolchildren of minority ethnic origins as of 2017 (CLPE research).

​With STORYMIX I want to help make children’s books more representative. I want to create heroes for every child and tell stories where every child can be the hero.

​Inclusivity in children's fiction matters because if young readers from underrepresented backgrounds continue not to see themselves in books then they will choose other media that reflects them better.  These same children are less likely to grow up to be authors and the cycle of underrepresentation continues.

​My long-term ambition with STORYMIX is that our writers will also go on to secure their own publishing deals and meaningfully change the makeup of the publishing landscape. We are always looking for writers so do get in touch if you are interested in writing for children (you can find all my details at the bottom)!

What made you decide to become an entrepreneur alongside being an author?

My love of problem solving is one of the bridges between being an author and an entrepreneur. As a writer you are constantly problem solving - unknotting plots or getting to the bottom of a character’s motivation and working out what they should do next.

There is a similar skill and thrill to solving a problem with one’s business proposition. I know publishers want to publish more children’s fiction that is representative and engaging for young audiences. I also know that there is a ton of talent out there from underrepresented groups waiting to be discovered.  With STORYMIX, I can help writers develop their voice and also give publishers the stories that they are so keen to publish.

As rewarding and exciting as problem solving is, I think another key part of being an entrepreneur is the ability to test ideas even if on a small scale.  This is something I am doing with Author Publishing which seeks to help authors find new audiences for their books that are out of print.  It’s a busy time for sure but I’m really enjoying building ideas that get great stories into the hands of readers.

If a reader of this article wants to choose a book for their child that is more truly representative of society, can you recommend one?

Noughts and Crosses by Malorie Blackman would be a great place to start. Especially because it explores the very fundamentals of society and its construction. Wonder by R. J. Palacio is for a slightly younger audience and is a fantastic study into kindness, friendship and the joy of celebrating and supporting differences.

My first couple of terms at Oxford were tough. I was one of only two black students at LMH and I would escape to London most weekends. I assumed that no one had gone to a school like mine and that I had nothing in common with the people around me.

One day, my tutorial partner asked me not to go to London. She asked me to stay in college for just one weekend. “We have fun,” she said. “And we’d love to get to know you.”

I did stay. And we did have fun. And I made a group of friends for life. I wonder what would have happened if that person had not reached out. It’s a favourite memory of mine because it is the foundation of many other happy university memories.

Oxford and your time at Oxford is about the friends you make, what you are studying and all the extra-curricular activities you choose, really everyone’s Oxford is a completely individual experience.

Were diversity and inclusion a factor in your experience at Oxford?

It’s a big questions and so many things intersect with that. I think at the moment Oxford is not there yet in terms of being representative of society. It’s not there yet, but I think it is working really hard to change that.

I don’t know if this is controversial, but I also think that young people of colour can sometimes rule themselves out as well. I almost did. University Challenge stereotypes were really off-putting, and I remember my mum had to talk me down from not applying. I think that happens for a lot of people, so they rule themselves out of the Oxford experience which is totally unique. It sets you up in so many ways, in terms of your peer group, who you meet and later down the line that could be really helpful. It also just in the way you get to express yourself, the tutorial system really prepares you for life, interviews and getting your point across in a work environment.

What do you think could be done to make the University more inclusive?

Access is key, and I know there is a lot happening in that space at Oxford now.

People who are coming out of university are normally and hopefully going into leadership roles. If that intake isn’t diverse, the people in those roles are not diverse and our society isn’t being led by people who are representative of that society.

I actually had some extra time at Oxford running something called The Oxford Access Scheme. A student-led organisation where I went into schools and spoke about applying to Oxford. I had such an amazing experience I really wanted to go and encourage other people of colour and from inner city schools to apply.

Oxford is the keys to opportunity and I think we need to be really careful about not ruling ourselves out of that opportunity.

Do you have a favourite spot in Oxford?

It’s hard to choose but I would say Edamamé restaurant on Hollywell Street. After working at the Radcliffe Camera I’d go there for lunch with my friends or my boyfriend (now husband) who would cycle over from Queens. It was a great introduction to Japanese food.  Now I take my kids there and it is as good as ever.

What does Black History Month mean to you?

To me the celebration of black excellence is about being a role model. Putting out a hand and saying come with me to achieve. I think too often the representations of the black experience in the media is negative and it is about finding positive ways to talk about all of our strengths.

In one sentence: what does Oxford mean to you?

If you want to submit yourself as an author, please go to the STORYMIX website.