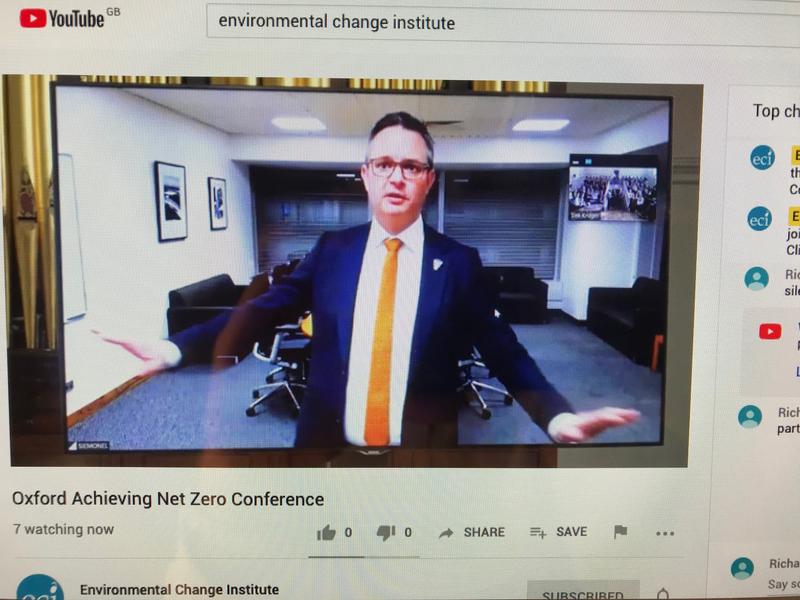 He was participating in day three of Oxford's Environmental Change Institute conference Achieving New Zero, all of it available by live stream and playback on You Tube.

He said, 'you can accrue economic benefit by moving strongly on emissions,' sharing a widely discussed theme at the conference. While some critics have cited climate change mitigation measures as a cost, others have argued that they are investments with many co-benefits including economic growth.

He said that agriculture is the frontline of climate challenges in New Zealand, noting that the UK commitment to net zero emissions by mid-century would be especially difficult to meet in regard of livestock-generated methane. He added that New Zealand have not yet signed up to 'net zero' partly because they cannot see how to achieve it.

The other big sector posing almost insurmountable challenges to New Zealand is transport. The country is heavily reliant on aviation for its single largest foreign exchange-earning industry, tourism. Meanwhile New Zealnad has a marine territory larger than the entire mainland of Europe but limited resources to manage it.

Shaw noted however that relations with neighboring Pacific island clusters are very strong indeed, not least because the local populations often have relatives based in New Zealand. Much of the New Zealand aid budget is devoted to climate resilient development on some of these islands.

The strength of the country is its relativelty small population and a primary energy grid already 80-90% renewable.

Shaw was frank about the failure of carbon trading, noting that politicans have typically interfered in cap and trade schemes the world over, whether to shield low-income sectors of society from high prices or to achieve another policy goal. 'We have had no cap in New Zealand,' he said. 'So there has been lots of carbon trading but no carbon reduction.'

Unlike Australia, however, he said that while there were fierce disagreements across and between sectors and groups - employers, unions, farmers - there was almost unanimous agreement about the reality of climate change. so it is not in New Zealand a controversial topic in and of itself. Shaw said that the population had long since moved beyond denial, led by farmers who are typically the most roibust in observing at first hand climate changes.

Transport is registering steep rises in emissions and he admitted being 'way behind' in electric cars, citing a heavy local preference for cheap, recently imported Japanese vehicles rather than expensive new alternatives.

Go this page on YouTube to watch the conference held in Oxford, 'Achieving Net Zero', or to review all sessions Sept 9-11.