OXFORD AND THE LITHIUM ION BATTERY 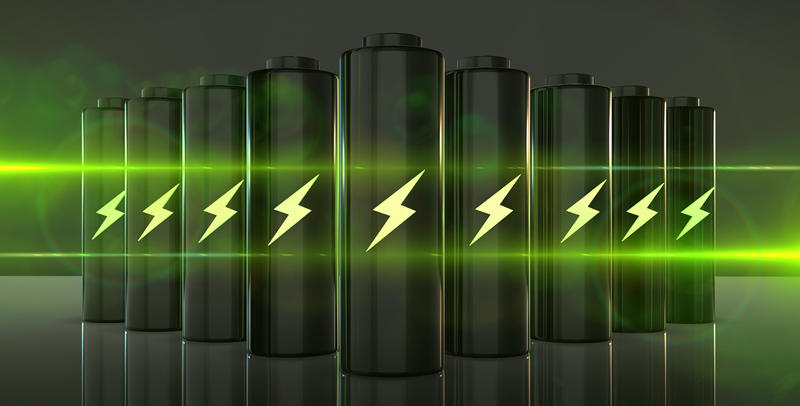 OXFORD AND THE LITHIUM ION BATTERY

What happened in the 1970s changed the world

The world’s oldest Nobel laureate, 97-year-old Professor John B. Goodenough, was on October 9, 2019 awarded the Nobel Prize in Chemistry for his work at Oxford University that made possible the lithium-ion batteries that power most portable devices such as phones and laptops, and increasingly cars. 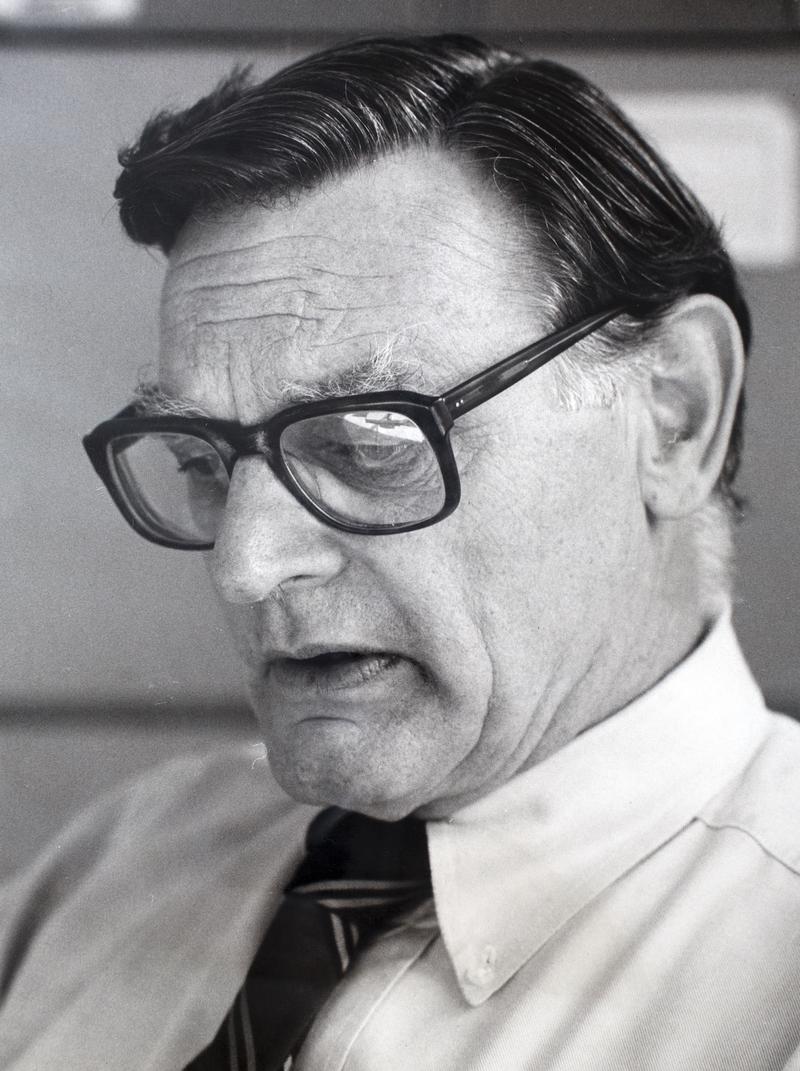 The story of the lithium ion battery exceeds Oxford, however. The 2019 Nobel Prize in Chemistry was awarded to three individuals in recognition that lithium ion batteries were the product of cumulative developments in the US, the UK and Japan attributable to M. Stanley Whittingham, John Goodenough and Akira Yoshino respectively.

The prize committee noted that ‘Through their work, they have created the right conditions for a wireless and fossil fuel-free society, and so brought the greatest benefit to humankind.’

The news story sketches the facts, but less reported is the Oxford of 1976, the year when Goodenough, an American physicist, was appointed Head of Oxford’s Inorganic Chemistry Laboratory. Also less reported is where Goodenough’s legacy rests in respect of current research at Oxford around batteries and energy storage.

The magnitude of Goodenough’s achievement was not in doubt, long before he was awarded in close succession both the world’s oldest scientific prize, the Copley Medal, and the Nobel Prize in Chemistry.

Professor Steve Faulkner, Goodenough’s successor as today’s Head of Inorganic Chemistry at Oxford, says, ‘John Goodenough and his group [Koichi Mizuchima, Philip C. Jones and Philip J. Wiseman] pioneered the development of lithium cathode materials in Oxford; without this work, the rechargeable lithium battery (and arguably the modern connected world) would not exist. His decade in charge of the Inorganic Chemistry Laboratory at the University of Oxford created a field of research that continues to thrive here.’

But if we go back to the early 1970s, the primary concern was oil shortage and this was where recent research at oil major Exxon by Michael Stanley Whittingham played a major role in creating the immediate context for Goodenough’s work.

Whittingham, today professor of chemistry and Director of both the Institute for Materials Research and the Materials Science and Engineering program at Binghamton University, part of the State University of New York, had also gone to Oxford’s New College as an undergraduate and then also for his doctorate, but he joined oil producer Exxon in 1972 fresh from a post-doctoral fellowship at Stanford University.

This was before the OPEC crisis of 1973, when oil prices spiked fourfold. Oil prices had risen already in 1970, triggering a broader interest in alternatives to fossil-fuel cars.

Lithium was nothing new. Chemists had known for years about its potential as an electron storing medium, and knew that it was much lighter than lead-acid batteries that had prevailed for a century, and potentially more powerful. But it was prone to catching fire, particularly if used with an organic electrolyte.

Whittingham is credited with developing a lithium titanium sulfphide battery cathode, and with Exxon went on to develop fully-scaled car batteries with ten times the energy density of lead-acid batteries. They utilised a lithium metal anode and lithium perchlorate in dioxolane as electrolyte.

It is far too easy to overlook how remarkable this achievement was, given current efforts to re-establish electric vehicles - almost half a century later.

And yet there was an obstacle that was to prove fatal to electric cars in the 1970s. The trouble was that the scaled-up car batteries contained no separators and over time repeated charging and depleting of the battery cells led to spiky deposits of lithium on the anode, eventually and unpredictably short-circuiting the battery by growing right across the anode-cathode gap, igniting the flammable electrolyte and creating a fierce chemical fire or explosion.

Lets move now to Oxford. What Goodenough and his team succeeded in doing was replacing the titanium disulphide cathode with lithium cobalt oxide (LixCoO2), resulting in a significant leap in power to 4 volts, and in energy density.

Goodenough’s time in Oxford spanned 1976-1986. His appointment was an inspired choice but did not seem obvious at the time. The obvious choice for the Inorganic Chair in Oxford, recalls then-doctoral student Russell Egdell (Univ, 1970) was Professor Sir Geoffrey Wilkinson, already a Nobel prize winner in 1973, knighted in 1976.

This presented a dilemma for the appointing committee. Oxford had established a foothold in an adjacent field, solid state chemistry, based on Goodenough’s predecessor J.S. Anderson.

The appointing committee elected Goodenough, writes R.J.P. Williams in his history of the department, Chemistry at Oxford, A History from 1600-2005,  ‘…in fair part to maintain the impetus in the very field Anderson initiated.’ Goodenough was also considered to be a top-notch intellectual and so it proved – even to the point of baffling some undergraduates, not all of whom could readily absorb his lectures. 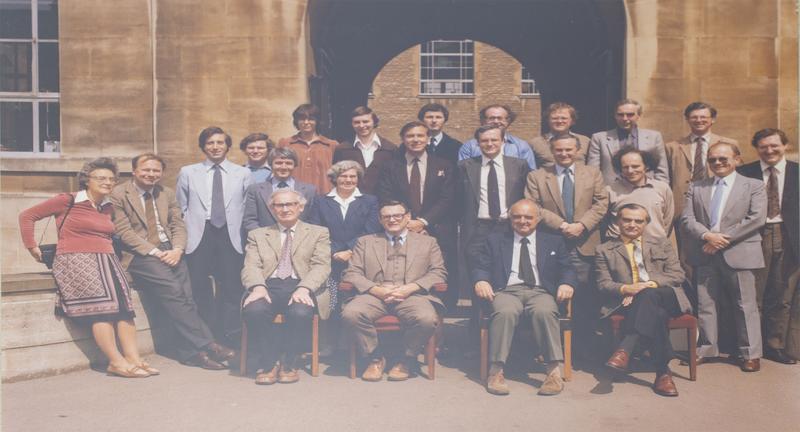 Departmental portrait, 1982. Goodenough is the second from left of the four seated men, front row

The third recipient of the 2019 Nobel Prize, Dr Akira Yoshino (Japan Prize Laureate, 2018) is credited with replacing the flammable anode, upgrading the electrolyte using petroleum-derived coke and introducing – crucially for safety – a separator that would melt and shut down the cell upon any sign of a short circuit. It was the separator that paved the way to mass commercialization but this didn’t happen overnight.

Japanese electronics giant Sony invested heavily in the technology over ten years, unthinkable for a UK or US company at the time. Only in this way did the lithium-ion battery make it to commercial production and the consumer marketplace in 1991, under Yoshino’s leadership.

By then, Exxon had long shut down the electric car programme after some fires but mostly because the oil price fell again.

He said in a recent interview with Asahi Kasei in Japan, ‘The big buzzword at first was “portable,” soon joined by “cordless” and “wireless.” I just sort of sniffed out the direction that trends were moving in.’

Now that electric cars are heavily back on the menu because of climate change and concerns over poor air quality partly derived from vehicle emissions, some of the problems of the 1970s have been solved but many remain.

The inherent volatility of a liquid electrolyte means that there is still a fire risk from lithium ion batteries, requiring the addition of complex battery cooling equipment in electric vehicles (EVs).

A second emerging issue is the fundamental resource implications of replacing the current fleet of cars with electric cars. Lithium is typically extracted from saline pools, while most of the other rare earth minerals and metals including trouble-child cobalt are mined. The largest deposits of cobalt lie in the Congo and represent a human-rights nightmare for car makers because child labour is omnipresent in Congolese mines.

From a life cycle analysis point of view, the many batteries needed to propel a car represent a considerable carbon footprint, calling into question exactly how ‘green’ such vehicles can claim to be, quite apart from the ultimate source of their electricity. End of life battery recycling is another hurdle which society has not yet tackled at scale.

Meanwhile, achieving a realistic driving range inflates the weight of vehicles far beyond their conventional cousins, increasing non-exhaust emissions from tyres and roadwear.

For all these reasons the world’s laboratories are humming again to the tune of anticipated battery breakthrough, the holy grail being a leap in power and energy density comparable to the leap Goodenough made from the 2.1 V of a lead-acid battery to his 4 V-volt lithium-ion battery.

Such a leap would reduce resource demands and emissions. Vehicle efficiency and range would rise, while weight would fall. The world might enter the lush green valley that lies beyond fossil fuels, in respect of light-duty transport at least.

This is where Oxford is still working out Goodenough’s legacy in 2019, behind South Parks Road in the Department of Materials under the leadership of Professor Peter Bruce FRS, also Principal Investigator for SOLBAT, a £12 million research program involving seven UK universities and nine industrial partners.

‘SOLBAT’ standing for ‘Solid state battery’, is one principal area where a battery breakthrough is anticipated to come from.

In 1976, the four areas Goodenough set to work on with his team were, recalls Egdell:

It was the last that Egdell worked on with Goodenough, and had to do with ‘when a solid would be a metallic conductor; when it would be a non-metal.’

This is a curious link to the present because once again the spotlight is on solid conductors of ions.

Perhaps the defining workstream of the current decade and beyond, is whether or not an automotive-size solid state battery can be developed, thereby eliminating the relatively heavy and volatile liquid electrolyte of current batteries.

This is where Bruce and his team are leading a major, government-funded quest for such a breakthrough, which he describes as ‘one which comes with significant challenges.’

He explains that solid state micro batteries have been known for decades, but scaling up is the problem.

‘But scaling this up is unsolved. It’s akin to going from microns to kilometres – many orders of magnitude. And around that, we would need a completely different industrial process because you don’t build a solid-state battery in the manner that you build a lithium ion battery. As for commercial application, the cost is nowhere near realistic at present and needs to fall.’

Like Goodenough, Bruce has identified four areas where battery chemistry needs to be thoroughly interrogated:

Bruce is working with a larger team than Goodenough. It comprises 19 academics and 19 postdoctoral students, approximately half at Oxford, the Project Leader his immediate colleague at Teddy Hall, Professor Mauro Pasta.

Michael Faraday FRS (1791-1867) was a British scientist who contributed to the study of electromagnetism and electrochemistry.

In a delightful link, Yoshino was first mesmerized at the age of 9 by encountering Faraday’s The Chemical History of the Candle, which had by then been translated into Japanese.

In another delightful link, Goodenough himself presented a completed formula for a solid-state glass battery in 2017 – although like so many other breakthroughs of its sort, this one is not ready yet for commercial application at scale.

Still working daily as Virginia H. Cockrell Centennial Chair in Engineering, Walker Department of Mechanical Engineering, The University of Texas at Austin, Goodenough is not the only Oxford chemistry professor to have won both the Copley Medal and the Nobel Prize.

As pointed out by the current holder of Goodenough’s Chair at Oxford, Professor Peter Edwards, this merit sits with Oxford chemist Dorothy Hodgkin, also the chemistry tutor of former UK Prime Minister Margaret Thatcher, who won both prizes in 1964 for her work on the structure of proteins.