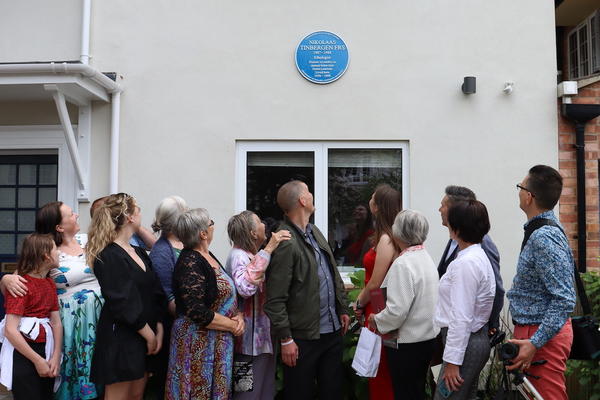 The Oxfordshire Blue Plaques Board – in association with the Oxford University Department of Biology – unveiled a blue plaque commemorating Nikolaas Tinbergen on Wednesday 8 June, 2022.

The unveiling ceremony took place at his Oxford home on Lonsdale Road, Summertown, to commemorate Nikolaas Tinbergen (1907–1988), the pioneering biologist and Nobel Laureate (Tinbergen's family are pictured, in front of the plaque).

Considered a founder of the biological study of animal behaviour, Tinbergen’s work earned him a Nobel Prize in 1973.

The Oxfordshire Blue Plaques scheme promotes recognition and awareness of people, places and events that have been of lasting significance locally or more widely. Niko Tinbergen has been honoured with a blue plaque, as he is considered one of the founders of ethology – the study of animal behaviour – and helped to established it as a recognised new science in biology.

In 1949 Tinbergen came to Oxford from The Netherlands as a lecturer and fellow of Merton College, later becoming Reader, then Professor of animal behaviour. He built up a research group which was to have a profound influence on the study of animal behaviour in the UK and around the world.

He is most famous for his work known as “Tinbergen’s Four Questions” which outline four questions – about causation, development function and evolution – that should be asked of any animal’s behaviour. These questions are now considered corner-stones of many  biology disciplines and human sciences. He later became interested in the applications of his findings to human conditions such as stress, child development and also collaborated with his wife on autism studies. 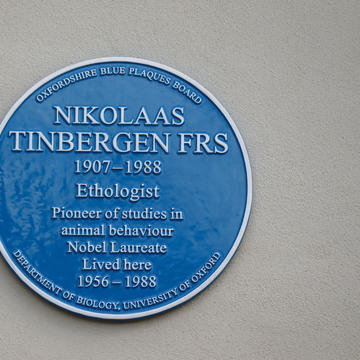 His greatest legacy is that he transformed the study of animal behaviour from a collection of anecdotes about natural history into a new scientific discipline. He stressed the importance of studying the behaviour of animals in their natural habitats, so that we could better understand animals ‘in their own world’, and reveal how and why animals behave like they do.

In 1973 Tinbergen was jointly awarded the Nobel Prize for Physiology or Medicine with Konrad Lorenz and Karl von Frisch for his fundamental work in animal behaviour and its potential wider applications. He was a pioneer in natural history film-making and was awarded the 1969 Italia prize, an accolade which pleased him as much as the Nobel Prize. He was elected a Fellow of the Royal Society in 1962, and was also elected to many other National Academies.

The unveiling ceremony for the blue plaque brings together those who worked with Tinbergen as colleagues or students, such as Richard Dawkins and Marian Stamp Dawkins, and those continuing his work today, such as Oxford’s current Professor of animal behaviour, Tim Guilford.

'Niko Tinbergen’s influence within zoology and wider biology cannot be overstated. Alongside colleagues he is credited with establishing and refining the study of ethology on the continent, and he then played the major role in exporting the subject to the wider world. He richly deserves this commemoration.'

He was born in The Hague and read Zoology at Leiden University. His interest was always in ornithology and careful observation of animal behaviour in the field and in the laboratory. His motto was ‘study Nature and not books’.

After gaining his PhD in 1932, he became an instructor at Leiden where he conducted early studies on the behaviour of stickleback fish and the herring gull.

WWII interrupted his career when he was held in a prison camp for refusing to co-operate with the Nazis and protesting at the removal of Jewish academics.

In 1949 he came to Oxford as a lecturer and fellow of Merton College, later becoming Reader, then Professor in animal behaviour. He built up a research group which was to have a profound influence on the development of ethology. An inspiring, energetic leader who treated his team as equals, he famously set out four key aspects of animal behaviour for ethological study: causation, development, function and evolution.

The Study of Instinct (1951) demonstrated these principles, recording patient fieldwork and detailed observations primarily of herring gulls. He was also a populariser of the subject through books and films. He later became interested in the applications of ethology to human conditions such as stress and collaborated with his wife on a study of autism.

About the Department of Biology

The Department of Biology at the University of Oxford will be formed from 1 August 2022. It forms from a merger between the Department of Plant Sciences and Department of Zoology. The mission of the Department will be to continue build on the historical and current biological science research being undertaken by the University, and training the next generation of biologists. This work aims to ultimately tackle some of the world’s challenges, such as food security, global change, biodiversity loss and infectious disease outbreaks.